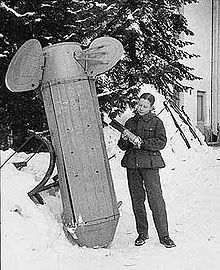 A Soviet RRAB-3 "Molotov bread basket" from which bombs were spread.

The RRAB-3, nicknamed the Molotov bread basket (Finnish: Molotovin leipäkori; Russian: ротативно-рассеивающая авиационная бомба - "rotationally dispersing aviation bomb"), was a Soviet-made droppable bomb dispenser that combined a large high-explosive charge with a cluster of incendiary bombs. It was used against the cities of Finland during the Winter War of 1939–1940. The bomb consisted of a cylinder 2.25 metres (7.4 ft) long and 0.9 metres (3.0 ft) in diameter.

Described by journalist John Langdon-Davies in 1940:

As it fell from an aircraft, a small turbine on the nose turned to release a spring loaded casing which, on opening, scattered 100 or more incendiary bombs; the main HE charge in the tail of the weapon continued to fall as a conventional bomb.[1]

This description seems to have become common currency among the British public in 1940.[2] During the Bristol Blitz, the locals dubbed a similar German device "Goering's bread basket".[3]

Other descriptions make no mention of a main charge and instead describe a large cylinder with vanes at the back that open out when the weapon is dropped. The vanes cause the bomb to spin and this has the effect of opening the sides and scattering the submunitions by centrifugal force.[4]

In 1939 the Soviet Foreign Minister, Vyacheslav Molotov, claimed Russia was not dropping bombs on Finland, but merely airlifting food to starving Finns. The Finns soon dubbed the RRAB-3 cluster bomb "Molotov's bread basket", and named the improvised incendiary device that they used to counter Soviet tanks the "Molotov cocktail", as "a drink to go with the food".

The Soviets had several versions: RRAB-1, RRAB-2, RRAB-3, with calibers of 1000, 500, and 250 kg respectively. Each capable of holding various types of submunitions including HE, incendiary and chemical. According to Soviet sources, a single RRAB-3 dropped from the altitude of 5 km could disperse bomblets over the area of up to 1100 square meters.[citation needed]