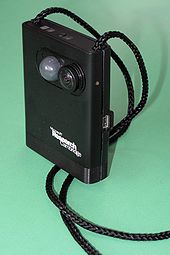 Microsoft's SenseCam is the key image capture tool for the MyLifeBits project, a lifetime storage database. SenseCam was invented by Researcher Lyndsay Williams[1] of Microsoft Research Cambridge, UK in 1999. Early team members were James Srinivasan and Trevor Taylor. Williams left Microsoft in May 2007 and set up Girton Labs[2] in Cambridge, UK.

This wearable camera contributes to an easier way of collecting and indexing one’s daily experiences by unobtrusively taking photographs whenever the internal sensor is triggered by a change in temperature, movement, or lighting. In addition, the trigger can be disabled and set to go snap photos in a timer mode. The Sensecam[3] is also equipped with an accelerometer, which can stabilise images so as to reduce blurriness. The camera is usually worn around the neck via a lanyard.

The photos represent almost every experience of its wearer's day. They are taken via a wide-angle "fish-eye" lens in order to capture an image that is likely to contain most of what the wearer can see. The SenseCam uses a FLASH memory which has the means to store upwards of 2,000 photos per day as .jpg files though more recent models with larger and faster memory cards means a wearer typically stores up to 4,000 images per day. These files can then be uploaded and automatically viewed as a daily movie, which can be easily reviewed and indexed using a custom viewer application running on a PC. Images can be played back at many frames per second (e.g. 3-10 frame/s), a technique termed Rapid Serial Visual Presentation (RSVP). It is possible to replay the images from a single day in as little as a few minutes.[3] An alternative way of viewing images is to have a day's worth of data automatically segmented into 'events' and to use an event-based browser which can view each event (of 50, 100 or more individual SenseCam images) using a keyframe chosen as a representative of that event.

SenseCams have mostly been used in medical applications, particularly to aid those with poor memory as a result of disease or brain trauma. Several studies have been published showing how reviewing ones SenseCam images can lead to what Martin A. Conway, a leading memory researcher from the University of Leeds, calls Proustian moments, characterised as floods of recalling details of some event in the past. SenseCams have also been used in liflogging, and one researcher in Dublin [1], Ireland has been wearing a SenseCam for most of his waking hours, since 2006, and has generated over 5 million SenseCam images of his life.

In October 2009, SenseCam technology was licensed[4] to Vicon and is now available as a product called Vicon Revue to researchers.

There is a wiki dedicated to SenseCam technical issues, software, news, and various research activities and publications about, and using, SenseCam.

Microsoft Research has contributed a device that will aid life bloggers among several other potential users. Sensecam was first developed to help people with minor memory loss, but the camera is currently being tested to aid those suffering with serious cognitive memory loss. The SenseCam produces images which are very similar to one's memory, particularly episodic memory, which is usually in the form of visual imagery.[5] By reviewing the day's filmstrip, patients suffering from Alzheimer's, amnesia, and other memory impairments found it much easier to retrieve lost memories.

Microsoft Research has also tested internal audio level detection and audio recording for the SenseCam, although there are no plans to build these into the research prototypes at the moment. The research team is also exploring the potential of including sensors that will monitor the wearer's heart-rate, body temperature, and other physiological changes along with an Electrocardiogram recorder when capturing pictures.

Other possible applications include using the camera's records for ethnographic studies in social phenomena, monitoring food intake, and assessing an environment's accessibility for the handicapped.[6]