The game's soundtrack is best known for two songs: "Liberi Fatali," a choral piece that is played during the introduction to the game, and "Eyes on Me," a pop song serving as the game's theme, performed by Chinese singer . Reviewers were generally pleased with the music, although several cited issues while comparing the score to previous games or looking at individual tracks.

Nobuo Uematsu's usual influences include , , and .

Uematsu enjoys writing lyrical songs, but tries not to be genre-specific. He asserts that expressing the emotions he desires is more important than improving skills. "I think it will be a shame if we won't be able to cry as we play our own game." The absence of character themes was due to him finding those of "" and "" ineffective. Uematsu considers it reasonable to have character themes if each character has a "highlight" in the game, but he found "Final Fantasy VIII" only focused on and as a couple, resulting in the "Eyes on Me" theme.

Near the end of "Final Fantasy VII"'s production, the developers suggested to use a singer, but abandoned the idea due to a lack of reasoning based on the game's theme and storyline. However, Nobuo Uematsu thought a ballad would closely relate to the theme and characters of "Final Fantasy VIII". This resulted in the game's developers sharing "countless" artists, eventually deciding on , a Chinese vocalist. Uematsu claims "her voice and mood seem to match my image of the song exactly," and that her ethnicity "fits the international image of Final Fantasy." After negotiations were made, "Eyes on Me" was recorded in with an .

Infobox Single
Name = Eyes on Me 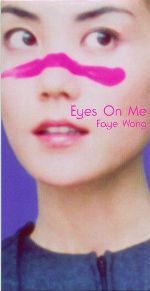 "Eyes on Me" is the ballad that serves as the theme of the game "". It was performed by Chinese singer and composed, like the rest of the game music, by . The song's lyrics, written in English by , unveil the hopes of a night club singer for romance with a member of her audience.

It was released as a in Japan, including an instrumental version and Wong's ballad "Red Bean". The song sold more than 400,000 copies, [cite web | author=Square Enix USA site staff | title=Nobuo Uematsu's Profile | url=http://www.square-enix-usa.com/uematsu/profile/index.html | publisher=Square Enix USA | accessdate=2006-03-17] placing it as the best-selling disc ever released in that country until "Hikari" by for "". "Eyes on Me" was the first song in video game history to win an award at the 14th Annual Japan Gold Disc Awards, where it won "Song of the Year (Western Music)" in 1999.

Within the game, the song is written by Julia Heartilly, a pianist who is the love interest of . [Raine: "Then the first song she released was 'Eyes On Me'?" / Laguna: "H-How does the song go?" / Raine: "You don't know?" / Laguna: "Well, you never let me hear it!" / Raine: "I didn't think you listened to music. The song's about being in love... I really like it." ("Final Fantasy VIII")] It is heard repeatedly throughout the game in various incarnations as an instrumental piece, including a version entitled "Julia". Its full version is heard during a moment between Squall Leonhart and Rinoa Heartilly—the main protagonists—onboard the Ragnarok. It is played once more during the game's ending.

A dance remix of the song was included on the Japanese release of Wong's 2000 album "Fable". Remixes also appeared in Toshiba EMI's series. In 2004 a Japanese-language version entitled "Natsu no Arubamu" (Summer Album) with lyrics by was included on "". It was also covered by Ailyn in 2005, and by for release on her 2006 single "". [cite web|url=http://www.cdjapan.co.jp/detailview.html?KEY=ESCL-2768|title=Angela Aki/Kokoro no Senshi|publisher=Neowing|accessdate=2007-03-27]

"Liberi Fatali" is a choral piece sung in that is played during the introduction of the game. The song was played during the in during the women's synchronized swimming event. [cite web | author=Suds | title=Video Game Music In the Olympics! | date=2004 | url=http://vgmusic.com/news/older/2004/q3.shtml | publisher=Video Game Music Archive | accessdate=2006-08-29] [cite web | title=The Culture of Videogame Music | date=2005 | url=http://www.empirearcadia.com/community/com-016.htm | publisher=Empire arcadiA | accessdate=2006-08-29] It was arranged by and the original Japanese lyrics were written by scenario writer , being translated into Latin for the game by Latin translator Taro Yamashita. "Liberi Fatali" translates to "Fated Children", although with a grammatical error, as it should be "Liberi Fatalis" by correct Latin grammar.

"Fithos Lusec Wecos Vinosec" is an additional song in the game, which is heard during the parade sequence. It is named after the recurring lyrics in Liberi Fatali. A similar track, "Succession of Witches", is featured on Hamaguchi's Piano Collections album. This track is essentially Liberi Fatali transcribed into a piano score. 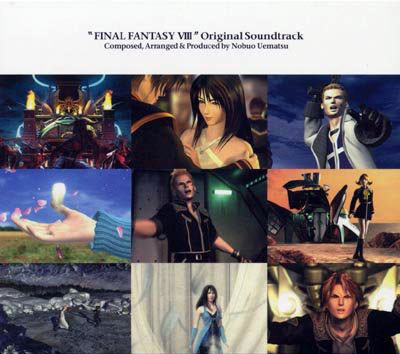 "Final Fantasy VIII Original Soundtrack" is a soundtrack of the music from ""; composed and produced by . The soundtrack spans four discs and 74 tracks, covering a duration of 4 hours and 9 minutes. It was first published by on March 10, 1999, and subsequently published by on May 10, 2004. [(2005). " [http://na.square-enix.com/music/tunes/ff/ SQUARE ENIX MUSIC Download] ". SQUARE ENIX MUSIC. Retrieved April 1, 2007.] Unlike most other "Final Fantasy" soundtracks, "Final Fantasy VIII Original Soundtrack" is completely comprised of English track names.

The soundtrack has sold at least 300,000 copies in Japan. [cite web|url= http://ff8.hoogetech.com/page.php?file=press-23nov1999.php|title=PSquaresoft Online Store Opening in Early December|publisher=|accessdate=2007-03-17] Adam Corn of SoundtrackCentral.com claims the score shows similarities to previous "" games, but asserts he is "not overly impressed with this one." [cite web|url=http://www.altpop.com/stc/reviews/ff8ost.htm|title=Final Fantasy VIII Original Soundtrack |publisher=SoundtrackCentral.com|accessdate=2007-03-30] A reviewer from Square Enix Music Online claims the soundtrack is "unique and very special" due to its contrasts—"When signs of age of the "Final Fantasy" franchise are shown, Uematsu counterbalances this by creating something weird and wonderful. When the soundtrack becomes too serious, Uematsu suddenly inserts a light-hearted number to lighten the mood."—he adds—"When the soundtrack is showing signs of consistent high quality, Uematsu randomly plunges into the depths of direness." [cite web|url=http://www.squareenixmusic.com/reviews/chris/ff8.shtml|title=Final Fantasy VIII Original Soundtrack |publisher=Square Enix Music Online|accessdate=2007-03-30]

Adam Corn of SoundtrackCentral.com claimed "the superior instrumental quality, well-done arrangements, and tasteful selection of themes boost the OST's ["Final Fantasy VIII Original Soundtrack"] qualities while hiding its flaws," elaborating that "even people such as myself who are not fans of the original will be impressed by its prowess, and fans will simply be enamored." [cite web|url=http://www.altpop.com/stc/reviews/ff8ov.htm|title=Fithos Lusec Wecos Vinosec: Final Fantasy VIII Orchestra Version|publisher=SoundtrackCentral.com|accessdate=2007-03-30]

Robert Steen of SoundtrackCentral.com commended the performance, claiming "Shinko Ogata seems to be a very capable player" and noted that although the arrangements are similar to the original pieces, they "breathe new life into the songs." A total of 11 user-created reviews on reached an aggregate of 95.5%. [cite web | url=http://www.amazon.com/gp/product/customer-reviews/B000058AB3/ref=cm_cr_dp_2_1/002-4582852-9312861?ie=UTF8&customer-reviews.sort%5Fby=-SubmissionDate&n=5174 | title=Reviews for Final Fantasy VIII: Piano Collections | publisher= | accessdate=2007-03-30]

"New Zealand PlayStation" magazine claimed "Final Fantasy VIII" has "one of the most memorable scores you will ever hear." [Cheung, Kevin (1999). New Zealand PlayStation. Next Gaming, 53.] Reviewers from multimedia news website stated that much of the game's impact is owed to its "terrific" musical score, but were disappointed by "yet another" variation of the traditional battle theme.

The music of "Final Fantasy VIII" has appeared in various official concerts and live albums, such as "", a live recording of an orchestra performing music from the series including several pieces from the game. [cite web|url=http://www.rpgfan.com/soundtracks/20020220/index.html|title=20020220 - Music from FINAL FANTASY|publisher=|accessdate=2007-04-01] Additionally, performed one song from the game, entitled "The Oath". [cite web|url=http://www.squareenixmusic.com/albums/dvds/tourdejapon.shtml|title=Album Information - Tour de Japon: Music from Final Fantasy DVD|publisher=SquareEnixMusic|accessdate=2007-04-01] At "Dear Friends" in , "Liberi Fatali" and "Love Grows" were conducted by . [cite web | author=Schneider, Peer | date=2004 | title=Dear Friends: Music From Final Fantasy | url=http://music.ign.com/articles/513/513292p1.html | publisher=| accessdate=2007-04-01]