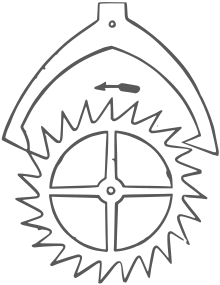 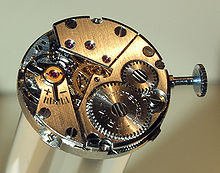 A clockwork is the inner workings of either a mechanical clock or a device that operates in a similar fashion. Specifically, the term refers to a mechanical device utilizing a complex series of gears.[1][2]

A clockwork motor is a mechanically powered clockwork device powered by a mainspring. Clockwork motors are generally manually energised using a key (wound up) via a ratchet device.

Often power for the device is stored within it, via a winding device that applies mechanical stress to an energy-storage mechanism such as a mainspring, thus involving some form of escapement; in other cases, hand power may be utilized. The use of wheels, whether linked by friction or gear teeth, to redirect motion or gain speed or torque, is typical; many clockworks have been constructed primarily to serve as visible or implicit tours de force of mechanical ingenuity in this area. Sometimes clocks and timing mechanisms are used to set off explosives, timers, alarms and many other devices.

The most common examples are mechanical clocks – hence the name. Others include:

This audio file was created from a revision of Clockwork dated 2009-07-07, and does not reflect subsequent edits to the article. (Audio help)
More spoken articles