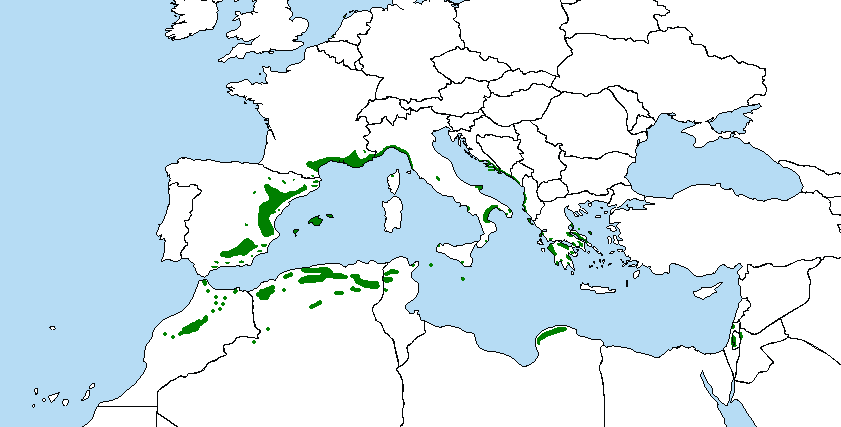 The Aleppo Pine ("Pinus halepensis") is a native to the . The range extends from and north to southern , and , and east to and northern , with an outlying population (from which it was first described) in (including ), and . It is generally found at low altitudes, mostly from sea level to 200 m, but can grow at an altitude of up to 1000 m in southern Spain, and up to 1700 m in the south, in and .

It is a small to medium-size , reaching 15-25 m tall and with a trunk of up to 60 cm, exceptionally up to 1 m. The bark is orange-red, thick and deeply fissured at the base of the trunk, and thin and flaky in the upper crown. The leaves ("needles") are very slender, 6-12 cm long, distinctly yellowish green and produced in pairs (rarely a few in threes). The cones are narrow conic, 5-12 cm long and 2-3 cm broad at the base when closed, green at first, ripening glossy red-brown when 24 months old. They open slowly over the next few years, a process quickened if they are exposed to heat such as in forest fires. The cones open 5-8 cm wide to allow the seeds to disperse. The seeds are 5-6 mm long, with a 20 mm wing, and are wind-dispersed.

Aleppo Pine is closely related to the , and which all share many of its characteristics. Some authors include the Turkish Pine as a subspecies of the Aleppo Pine, as "Pinus halepensis" subsp. "brutia" (Ten.) Holmboe,

It is widely planted for timber in its native area, being one of the most important trees in in Algeria and Morocco.

The resin of the Aleppo Pine is used to flavor the Greek wine .

had an Aleppo Pine in his garden at ; this tree was the inspiration and model for his painting, "The Big Trees". As of 2005, the tree is still growing in Cézanne's garden.