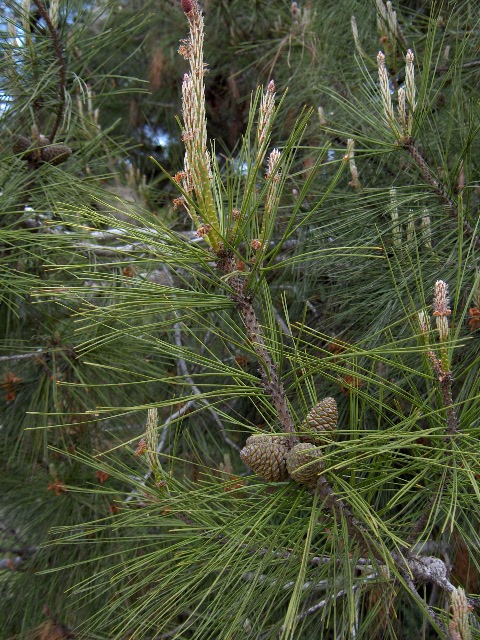 The Turkish pine ("Pinus brutia") is a native to the eastern region. The bulk of its range is in , but it also extends to the East Aegean Islands of , the , , Georgia, , northern , western , , and . It generally occurs at low altitudes, mostly from sea level to 600 m, up to 1200 m in the south of its range.

It is a medium-size , reaching 20-35 m tall and with a trunk diameter of up to 1 m, exceptionally 2 m. The bark is orange-red, thick and deeply fissured at the base of the trunk, and thin and flaky in the upper crown. The leaves ('needles') are in pairs, slender, mostly 10-16 cm long, bright green to slightly yellowish green. The cones are stout, heavy and hard, 6-11 cm long and 4-5 cm broad at the base when closed, green at first, ripening glossy red-brown when 24 months old. They open slowly over the next year or two to release the seeds, opening to 5-8 cm broad. The seeds are 7-8 mm long, with a 15-20 mm wing, and are mainly wind-dispersed.

Turkish Pine is host to a sap-sucking "". Under normal circumstances, this does no significant damage to the pine, but is of great importance for the excess sugar it secretes. This sugar, "honeydew", is collected by s which make it into a richly flavoured and valuable , "pine honey" (Turkish, "çam balı"), with reputed medicinal benefits.

The , a rare , is largely restricted to forests of Turkish Pine and depends heavily on it for feeding; the ranges of the two species are largely coincident.

The "Lone Pine", a prominent landmark tree at an ANZAC First World War battle at , was this species. Cones from the battlefield were taken home to Australia, and plants sourced from the seeds were planted as living memorials.

It is widely planted for timber, both in its native area (it is the most important tree in in Turkey) and elsewhere in the Mediterranean region east to . It is also a popular ornamental tree, extensively planted in parks and gardens in hot dry areas (such as southern , , and west and central in the ), where its considerable heat and drought tolerance is highly valued. The subspecies "eldarica" is the most drought tolerant form, used in , and more recently in Arizona, California, and Texas. In the United States subsp. "eldarica" is usually referred to as either "Eldarica Pine" or "Afghan Pine".

Turkish Pine is also known by several other names, Calabrian Pine (from a population of the pine in in southern , from where the pine was first botanically described), East Mediterranean Pine and Brutia Pine.