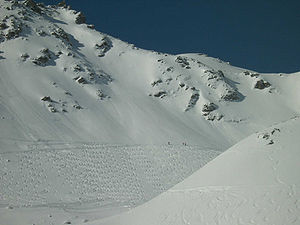 Backcountry skiing near the Arlberg, Austria

Backcountry skiing is skiing in a sparsely inhabited rural region over ungroomed and unmarked slopes or pistes, including skiing in unmarked or unpatrolled areas either within the ski resort's boundaries or in the backcountry, frequently amongst trees ("glade skiing"), usually in pursuit of fresh fallen powder snow.

Unlike groomed cross-country and alpine skiing, the land and the snow pack are not monitored, patrolled, or maintained. Fixed mechanical means of ascent such as ski lift, funiculars, or trams are typically not present, but may be used to gain initial altitude when available.

Backcountry skiing, also known as ski touring or ski mountaineering, can involve single or multi-day trips through camping or the use of mountain huts.

"Off-piste skiing" typically refers to any skiing near, adjacent to, or between controlled trails and slopes. Ski touring, ski mountaineering and randonnée refer to skiing unmarked slopes, typically unaccessed by ski-lifts.

Heli skiing or cat skiing employ machinery to gain access to the backcountry and typically involve alpine skiing equipment rather than any form of ski touring gear since the skier is not required to gain elevation on their own.

In Europe and Canada off-piste skiing is generally permitted at ski resorts. In the United States off-piste skiing may or may not be; regulations vary by ski area. Many ski resorts prohibit it outright and some simply post warning signs that skiers are leaving the patrolled ski area boundaries.

Backcountry skiing can be highly dangerous due to avalanche danger, exhaustion, and mountain weather. Other hazards include cliffs, rock fall and tree wells.