The League Championship Series (LCS) is the official name for a round of postseason play in Major League Baseball which has been conducted since 1969. In 1981, and since 1995, the two annual series have matched up the winners of the Division Series, and the winners advance to meet in the World Series. 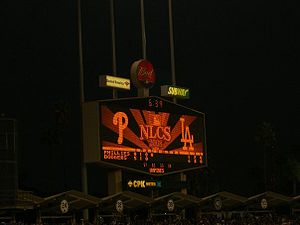 The League Championship Series was promulgated in 1969, when both the National League and the American League increased in size from ten teams to twelve with the addition, via expansion, of the Montreal Expos and San Diego Padres to the former and the Kansas City Royals and Seattle Pilots (now the Milwaukee Brewers of the NL) to the latter. Concomitant with this, both leagues formed Eastern and Western Divisions, the first-place teams from which faced off in the LCS.

Originally, the League Championship Series were best-of-five, but were lengthened to best-of-seven in 1985. Since 1995 the LCS has matched up the winners of the Division Series, which were added when both leagues realigned into three divisions, the winners thereof plus one wild card team in each league participating in the latter series, which is a best-of-five (this change was actually supposed to take place in 1994, but postseason play was not held in that year due to a players' strike).

Until 1998, the home-field advantage in the LCS was allocated on a rotating basis between the two (and from 1995 through 1997, among the three) division champions; since 1998 the team with the better record has had this advantage, except that in no case can the wild card ever secure the extra home game, regardless of regular-season records. The LCS is formatted 2-3-2, with the team holding home-field advantage opening the series at home and playing the next three games on the road, before returning home for two more possible games.

Every MLB team has appeared in an LCS at least once.