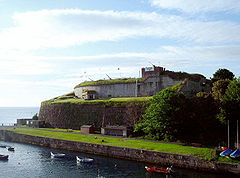 The Fort is situated beside Weymouth Harbour. 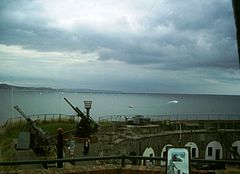 Guns on the Fort Ramparts.

Nothe Fort is a fort in Weymouth, Dorset, England. The fort is situated on the shore beside the northern breakwater of the ex-military Portland Harbour, and at the mouth of civilian Weymouth Harbour. The fort was built in 1872 to protect Portland's harbour, which was then becoming an important Royal Navy base. The fort played an important role in World War II, when the harbour was used as base by the British and American navies.

In 1956, the fort was abandoned, and in 1961 it was purchased by the local council. It is now a museum, featuring models, World War II memorabilia as well as original cannons and guns and British and American WWII vehicles. The museum received 12,042 visitors in 2002[1].