Cross media marketing is a form of cross-promotion in which promotional companies commit to surpassing the traditional advertisements and decide to include extra appeals to their offered products..[1] The material can be communicated by any mass media such as e-mails, letters, web pages, or other recruiting sources. This method can be extremely successful for publishers because the marketing increases the ad’s profit from a single advertiser. Furthermore, this tactic generates a good liaison between the advertiser and the publisher, which also boosts the profits.[2] 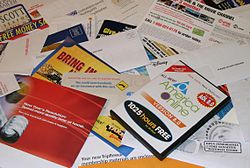 One of the first steps to integrate cross media tactics effectively into a specific project is to evaluate and examine a customer’s preferences.

The first notable occurrence of cross media marketing occurred in 1977 with the release of the film Saturday Night Fever and its respective soundtrack. The single "How Deep Is Your Love" by The Bee Gees was originally meant to be recorded by Yvonne Elliman for an unrelated album, but it was decided by RSO Records to have The Bee Gees record it and released in an effort to promote the film. The release of the film promoted not only the released single but the entire soundtrack.

More recent examples include companies promoting music artist's concerts, followed by having one of the artist's songs used in a commercial for the company.

Cross media marketing programs are difficult to advertise; therefore, Damien Marchi, who was involved in the second season of Big Brother in France, created eight commandments to cross-media marketing success.

Real Time personalization (RTP) is an innovative way to looking at cross media marketing. RTP has the ability to see who visits each webpage. In addition, if companies have the ability to see a website viewed by a potential customer, then the company can quickly personlize what the customer is looking and make appeals to a certain product. After a real time personalization search, a business plan is created to fit each potential customer. When a potential buyer is looking at a company's advertisement, a popup add usually appears. Every product that a customer accepts, five to seven linked advertisement pages popup. RTP captures these acceptance rates, locate advertising company, and supplies the information necessay for the next step in the business plan. Variable Data Printing (VDP) constantly modernizes and enhances the communication between the marketing company and their customers. In addition, if a campaign is personalized and directed to a specific audience, then more customers will typically buy the product. Therefore, VDP creates a cycle of increases profitability, raising brand awareness, and gaining prospective sales. All of these elements are needed to enhance the marketing of products.[4]

For mail, companies use the information collected from their customer analysis to provide the individuals with personalized letters or upcoming offers. On the internet, customization permits users to have access to exclusive messaging. In addition, the VDP assists the marketing process by talking to each specific group of customers and giving them personal attention rather than treating them all the same way. This consumer and company process is very common in large online retailers such as Amazon.com. The more personalized an offer is to the target audience, the more prone they are to react positively.[5]

Some of the data that can be investigated to strengthen personalizing the offer includes:

One of the major problems with cross-media marketing is the creative development level. Getting one group to collectively use their creativity and communicate with the other areas of work is very difficult when one team is working on television, another is involved in designing the print creative, another is developing radio ads, and yet another is putting together the Internet program. Although the messaging elements are not very hard to compose, creating a campaign that is completely mutually dependent, with each branch of the project fulfilling their task, is quite impossible when the creative teams are split. Therefore, to achieve some sort of cohesion, teams must communicate and corporate with each branch.[6]

The Cross Media Marketing Corporation is a company uses e-mail messages or telephone calls, which are personalized to each specific customer, to sell their product. In 2002, federal regulators filed a criticism that the corporation’s magazine division was breaching marketing regulations. The Federal Trade Commission stepped in and claimed the company withheld information, misrepresented subscription lengths and prices, and billed customers for magazines that they did not order. The Corporation was sentenced by the F.T.C. to pay a hefty fine for their violation. A year later, in 2003, The Cross Media Marketing Corporation was forced to lay off 300 people and agreed to a $1.1[citation needed] settlement fee with the F.T.C for ignoring customer’s desires to cancel their subscriptions and for misrepresenting the costs of packaging. Currently, the company is liquidating its possessions.[7]

"'Alto Clothing'": Alto Clothing is an online company that sells garments for tall males. In 2005, Alto opened a cross-media marketing effort with the assistance of an agency called Neoco. The clothing company was looking to increase sales and publicity of the line; therefore, they created an ecommerce site. Alto plans on using a mixture of viral, press, and online activity. The ads will be shown on high profile sites such as Time Out. In addition, an email campaign will be sent to 100,000 men.

'"Andres and Henriette'" In 2003, a financial marketing company in Denmark series on the internet entitled Anders and Henriette, as a cross-media marketing scheme to promote their financial assistance program. The production was about a young couple that was going to live together. The series of eight episodes was a major success because it attracted 300,000 individuals, in which ninety percent of them viewed the site again. Consequently, the campaign made the name of the financial foundation a well-known brand name.[8]