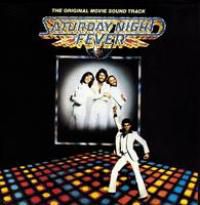 "Saturday Night Fever: The Original Movie Sound Track" is the soundtrack album from the blockbuster film "" starring . In the United States, the album has gone platinum fifteen times.

Along with the success of the movie, the , composed and performed primarily by , became the number one best-selling soundtrack of all time. The cultural impact of "Saturday Night Fever" in the was tremendous.The Bee Gees had originally written and recorded the five original songs for the film, "Stayin' Alive", "Night Fever" and "How Deep Is Your Love" (all performed by the Bee Gees), "More Than A Woman" (performed in the film in two different versions--one version by Tavares, and another by the Bee Gees), and "If I Can't Have You" (performed in the movie by ) as part of a regular album (they had no idea at the time they would be making a soundtrack). Two previously released Bee Gee songs, "Jive Talkin'" and "You Should Be Dancing", are also included on the soundtrack. Other previously released songs from the disco era round out the music in the movie.

In addition to the Bee Gees' score, additional incidental music was composed and adapted by . Three of Shire's cues, "Manhattan Skyline", "Night on Disco Mountain" (based on the classical piece ""), and "Salsation", are included on the soundtrack album. Five additional cues, "Tony and Stephanie", "Near The Verrazano Bridge" (both adapted from the Bee Gees' song "How Deep Is Your Love"), "Barracuda Hangout", "Death On The Bridge", and "All Night Train", while heard in the film, remain unreleased on CD.

The soundtrack won a for Album of the Year.

The album was recently re-released on Reprise Records, as part of the Bee Gees' regaining control of their master tapes.

The soundtrack hit the #1 spot on 's Pop Album and Soul Album charts. In 2003 the named it the 57th greatest album of all time.

"Saturday Night Fever - The Original Movie Soundtrack" was ranked 80th in a 2005 survey held by British television's to determine the 100 greatest albums of all time.

The album was the best-selling in history until 1984, when Michael Jackson's "Thriller" replaced it.

Additional songs in the film not on the soundtrack album

Additional songs recorded for the film but not used