Ceremony of the Keys

Ceremony of the Keys

Ceremonies known as the Ceremony of the Keys are held in at least two locations in the United Kingdom: London, and Edinburgh, as well as Gibraltar.

Probably the best known such ceremony is the one that takes place every night at the Tower of London, and has done so in some form or another since the 14th century. At exactly 9.53pm, the Chief Yeoman Warder, dressed in Tudor Watchcoat, meets the military escort, made up of members of the Tower of London Guard. Together, the CYW and the Yeoman Warder 'Watchman' secure the main gates of the Tower. Upon their return down Water Lane, the party is halted by the sentry and challenged to identify themselves:

Following this, the party makes its way through the Bloody Tower Archway into the fortress, where they halt at the bottom of the Broadwalk Steps. On the top of the Stairs, under the command of their officer, the Tower Guard present arms and the Chief Warder raises his hat, proclaiming:

He then takes the keys to the Queen's House for safekeeping, while the Last Post is sounded.

As with many events of ceremony in the United Kingdom, it takes some significant outside influence to interrupt the Ceremony of the Keys. The one time when the ceremony was interrupted was during the Second World War, when there was an air raid on London, and a number of incendiary bombs fell on the old Victorian guardroom just as the Chief Yeoman Warder and the escort were coming through the Bloody Tower archway. The shock and the noise of the bombs falling blew over the escort and the Chief Yeoman Warder, but they stood up, dusted themselves down, and carried on. The Tower holds a letter from the Officer of the Guard apologising to King George VI that the ceremony was late, along with a reply from the King which says that the officer is not to be punished as the delay was due to enemy action.[citation needed]

There is also a Ceremony of the Keys held in Holyrood Palace, at the start of the British monarch's week-long residence there in July. Soon after the monarch's arrival, in the forecourt of the Palace, the Queen or King is symbolically offered the keys to the city of Edinburgh by the Lord Provost. The monarch returns the keys, saying:

I return these keys, being perfectly convinced that they cannot be placed in better hands than those of the Lord Provost and Councillors of my good City of Edinburgh. 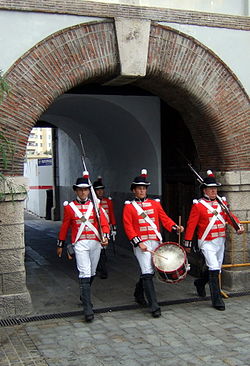 Re-enactment of the Ceremony of the Keys at Grand Casemates Square, Gibraltar by History Alive

The Ceremony of the Keys event is a re-enactment of the locking of the gates to the old Town and garrison of Gibraltar.

During the 18th and 19th centuries, the sea came up to the defensive walls and there were four outer gates through which the town could be entered. Four keys locked these entrances to the town. The ceremony's origins date from the Great Siege of Gibraltar, which started in 1779 when French and Spanish troops attempted to capture Gibraltar. The keys were kept by the Governor who would hand them to the Port (Gate) Sergeant each evening at sunset, so that the four land entrances could be locked shut. The Gate Sergeant with an escort consisting of several armed soldiers, fife and drums would then march to each of the four gates in turn. He would be challenged by the sentry at the gate with the same words as used in London. Once all the gates were locked, the keys would be returned to the Governor at The Convent. In the morning, the Port Sergeant would once again collect the keys to open the town.

During the Great Siege, the Governor, General Sir George Augustus Eliott, reputedly would carry the keys with him everywhere; it was rumoured he slept with them under his pillow at night.

The ceremony was reinstituted in 1933 and is currently performed twice a year (in April and October) by the Royal Gibraltar Regiment and visiting British units and bands. In the modern version of the ceremony, at the firing of the sunset gun, the Governor of Gibraltar symbolically hands the keys of the fortress to the Port Sergeant. The Port Sergeant, accompanied by an armed escort, marches away to symbolically lock the gates of the fortress for the night before returning the keys to the Governor. The party is also accompanied by drums and fifes, to sound a warning for aliens to leave the colony before the gates are closed. The Ceremony is held only at one of the four gates, Grand Casemates Gates (the old Waterport Gates) at Casemates Square. At official dinners at the Governor's residence, the Keys are piped in by the Port Sergeant who hands them to the Governor declaring the fortress to be locked and safe, these are then placed on a cushion on the table where they remain during the meal.