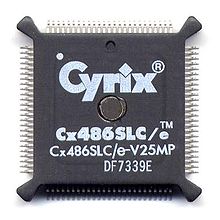 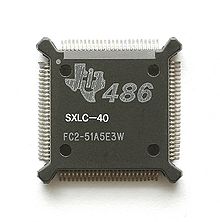 The Cyrix Cx486SLC was Cyrix's first CPU offering, released after years of selling coprocessors that competed with Intel's units and offered better performance at a comparable or lower price.

The 486SLC is based on the i386SX bus, and was intended as an entry-level chip to compete with the Intel 386SX and 486SX. Texas Instruments manufactured the 486SLC for Cyrix, and also sold it under its own name; ti486SLC. Later, they also released their own version of the chip, the TI486SXLC which featured 8kB internal cache vs 1kB in the original Cyrix design. The similarly named IBM 486SLC, 486SLC2, 486SLC3 (16-bit version of IBM 486DLC aka Blue Lightning) and IBM 386SLC are often confused with the Cyrix chips, but are not related and instead based on an Intel CPU core.

The 486SLC can be described as a 386SX with the 486 instruction set and 1K of onboard L1 cache added. Unfortunately it inherited the 386SX's 24-bit address bus (16mb max. DRAM) , and 16-bit datapath which limited its memory bandwidth. Like the 386 and 486SX, it had no on-board math coprocessor, but unlike the 486SX, it could make use of an Intel 287, 387SX or compatible coprocessor. Due to the limitations of the 386SX's bus and its smaller L1 cache, its performance could not compete with the 486SX when the latter was running on a full 32-bit bus.

The 486SLC was primarily used in very inexpensive low-end motherboards and PC clones. Because of its low power consumption, it also saw use in laptops. The 486SLC was also available as a 32-bit version based on the i386DX bus, see 486DLC.