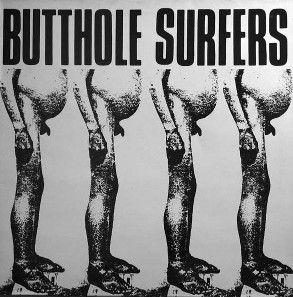 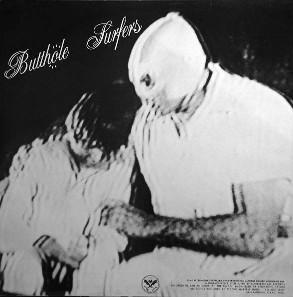 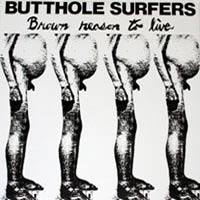 Lower caption = Later editions of Alternative Tentacles' 12-inch vinyl version of the Butthole Surfers' debut EP include the words "Brown Reason to Live" on the cover.


"Butthole Surfers" is the debut studio EP by American punk band , released in July 1983. It is also known as "Brown Reason to Live" and "Pee Pee the Sailor" (see "Title controversy"). All songs were written and produced by the Butthole Surfers.

The album was originally released on . "Butthole Surfers" and 1984's "" were reissued as the "" on in 2003. The 12-inch vinyl version is still available from Alternative Tentacles, and is listed as "Brown Reason to Live".

The center label on "Butthole Surfers"' vinyl printings invites listeners to erroneously play the record at "69 RPM," a joke referencing the famous sex position. The album's back cover features a mildly distorted image of famed Mexican .

The Surfers introduced themselves to the world with seven songs full of throbbing bass, crashing drums, and heavily distorted guitar topped off with largely nonsensical, barely intelligible lyrics, alternately sung by lead vocalist and guitarist . Haynes also plays on some tracks. Unlike later Surfers albums, no electronic instrumentation is present.

Some songs, such as "The Shah Sleeps in Lee Harvey's Grave" and "Suicide," appear to be either mockeries of, or sloppy attempts to mimic, the hardcore style of music that was rising in popularity amongst then-contemporary American punk fans. "The Revenge of Anus Presley" is likely a Black Flag and parody. Others, including "Hey" and "Bar-B-Q Pope," are better indicators of the psychedelic direction the band would take on future albums.

Having parted ways with their original drummer, Scott Matthews, shortly before entering the studio, the Surfers used a number of different percussionists on this album. The last of them, , is still with the band to this day. Bassist was also a relatively new addition, joining after original bass player quit at the same time as his brother, Scott. [Michael Azerrad, "" (New York, Boston: Little, Brown and Company, 2001) 279] Jolly would also play on the Surfers' first official live release, "", and their first full-length album, "".

Most of this album is often included in the band's live performances, including "The Shah Sleeps...," "Hey," "Something," "Bar-B-Q Pope," and "Suicide."

"The Shah Sleeps..." and "Bar-B-Q Pope" are the two songs that are aviable as a download on the MP3 section onthe Butthole Surfers official website.

As for "Pee Pee the Sailor", the album has never been officially released or marketed under that name. That title is derived from Alternative Tentacles' vinyl editions, which include a cartoon of a -esque character with buttocks for a face printed on the record's center label, and the words "Pee Pee the Sailor" written next to it. This cartoon is in addition to the label's humorous suggestion that listeners play the record at 69 RPM.

The sessions for "Butthole Surfers" were made possible by an earlier Surfers concert at , 's , where they had opened for the and The band gained an early admirer in Kennedys lead vocalist , who also ran the Kennedys' . Biafra told the band that, if they got someone to loan them studio time, Alternative Tentacles would reimburse the studio once the album was complete.

According to guitarist , the band then talked Bob O'Neill, owner of , ' , (a.k.a. Bob O'Neill's Sound Studio, a.k.a. the Boss), into loaning them the required time. [Michael Azerrad, "" (New York, Boston: Little, Brown and Company, 2001) 279] Joe Pugliese, a San Antonio music promoter, recalled that lead singer slept at the studio during these sessions. Mike Taylor, an engineer at BOSS Studios, assisted with the EP's production. Taylor would later record and assemble the contents of 1984's "". [ [http://ngro_obsrvr.tripod.com/articles/feedfish.html Joe Nick Patoski and John Morthland, "Feeding the Fish: An Oral History of the Butthole Surfers," "Spin Magazine", 1996] , archived at Butthole Surfers fan website, [http://ngro_obsrvr.tripod.com/ Negro Observer] ]

All songs written and produced by the Butthole Surfers.