Infobox Film | name = The Taking of Pelham One Two Three 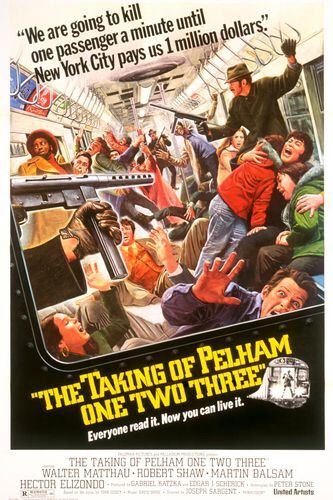 "The Taking of Pelham One Two Three" (also known as "The Taking of Pelham 123") is a thriller movie released in . It stars , Robert Shaw, , and ; it was directed by , produced by , and was based on the novel of the same title by John Godey. wrote the screenplay, which takes its basics from the novel but is highly different in its approach, embracing a kind of NYC cynicism.

Matthau portrays the cynical and grumpy Lieutenant Zachary Garber, a Transit Authority policeman. His routine is interrupted by an unexpected hijacking of a subway train (on the number 6 line). The police rush to deliver the of one million dollars in unmarked bills of low denominations in an hour's time, dispatching a squad car for a frantic drive uptown from the financial district, as Lieutenant Rico Patrone () attempts to negotiate by radio from transit police headquarters, distracting the hijackers' attention. Garber has left headquarters to confront them underground if possible. Garber is puzzled by the hijacking because there is no place to take the train to escape, and because all subway trains have a "dead-man" feature which requires a live person at the controls at all times to keep the train running. Unknown to the police, the four hijackers (led by British mercenary Bernard Ryder () and a disgruntled former motorman Harold Longman ()) have ingeniously defeated the dead-man's feature. Once they receive their ransom money, they surreptitiously exit, sending the train off at top speed toward the terminal station so the police may be distracted by chasing the runaway subway cars long enough for the hijackers to escape. The train was set to reach up to speeds over 70 MPH which would cause it to automatically trip a red light brake as it entered the South Ferry Loop.However, while most of the police have gone chasing the subway cars, Garber follows a hunch and enters near where the subway cars were before taking off south. An undercover policeman, who was one of the hostages, jumps off the train and manages to kill one of the hijackers. A second hijacker is killed by Ryder when he attempts to leave without disarming. Longman escapes unnoticed, but Ryder is caught by Garber just before Ryder would have killed the undercover cop. Rather than go to jail, and finding out that New York doesn't execute criminals, Ryder commits suicide by putting his foot on the third rail, electrocuting himself. In the final part of the movie, Longman is home with his share of the ransom cash. Garber and Patrone come calling, looking up the alibis of all former motormen (since none of the other hijackers knew how to drive a subway car). Though his alibi is shaky, Garber and Patrone are about to leave when Longman sneezes loudly. Garber, reacting instinctively, says "Gesundheit" &mdash; then silenty confronts Longman, realizing that Longman was the man who kept sneezing throughout conversations over the radio Garber had with Ryder.

The score was composed and conducted by . "The Taking of Pelham One Two Three" remains his most popular score. The soundtrack album was the first-ever CD release by . The end titles contain a more expansive arrangement of the theme, courtesy of Shire's wife at the time, , who suggested that he close out the score with a more traditional ode to New York.

In , the film was remade as a with the same title, with in the Matthau role and replacing Shaw as the senior hijacker. Although not particularly well received by critics or viewers, this version was reportedly more faithful to the book, though it updated the setting with new technologies. It was also devoid of the quirky humor that made the original so memorable.

Another remake, directed by and starring and , will be released in .

*The movie was the inspiration for 's song "The Taking of Peckham One Two Three".
*The hijackers' system of referring to each other as colors, such as "Mr. Blue", was later used by in his film "", and a group of other productions most notably the TV series "", in this case to hide the operators military ranks and real names.
*A reference to the movie appears in the lyric of the ' song "", on the 1994 album "": "Well, it's the taking of Pelham, one, two, three / If you want a doodoo rhyme then come see me"
* Portions of the scenes in the tunnel were filmed on the old Court Street line in Brooklyn, which now serves as a track which links to the .
* A reconstruction of a Transit Authority control center was built on a soundstage. It was rendered down to every exact detail as a real one might have.
*The end title theme is a featured track on the & album ""