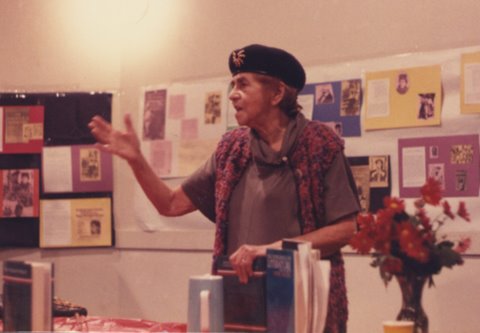 Raya Dunayevskaya ( &ndash; ) was the founder of the of in the . At one time 's secretary, she later split with him and ultimately founded the organization and was its leader until her death.

Born a in , Dunayevskaya emigrated to the United States and joined the revolutionary movement in her childhood. Active in the youth organization, she was expelled at age 18 and thrown down a flight of stairs when she suggested that her local comrades should find out Trotsky's response to his expulsion from the and the . By the following year she found a group of independent Trotskyists in , led by , an advocate of and legal . ["Women Building Chicago", p. 239.]

Without getting permission from the U.S. Trotskyist organization, she went to in 1937 to serve as 's Russian language secretary during his there. ["Women Building Chicago", p. 239.] Having returned to Chicago in 1938 after the deaths of her father and brother, she broke with Trotsky in 1939 when he continued to maintain that the was a "" even after the (also known as the Hitler-Stalin Pact). She opposed any notion that workers should be asked to defend this "workers' state" allied with in a . Along with theorists like and , Dunayevskaya argued that the Soviet Union had become . Toward the end of her life, she stated that what she called "my real development" only began after her break with Trotsky. ["Chicago Literary Review", "Marxist-Humanism, an Interview with Raya Dunayevskaya," p. 16.]

Her simultaneous study of the Russian economy and of Marx's early writings (later known as the ""), led to her theory that not only was the a society, but that was a new world stage. Much of her initial analysis was published in "The New International" in 1942-1943.

In 1940, she took part in the split in the Socialist Workers Party that led to the formation of the Workers Party (WP), with whom she shared an objection to Trotsky's characterisation of the Soviet Union as a . Within the WP, she formed the alongside (she being "Freddie Forest" and he "J.R. Johnson", named for their party cadre names). The tendency argued that the Soviet Union was state capitalist, while the WP majority maintained that it was .

Differences within the WP steadily widened, and in 1947, after a brief period of independent existence during which they published a series of documents, the tendency returned to the ranks of the SWP. Their membership in the SWP was based on a shared insistence that there was a pre-revolutionary situation just around the corner, and the shared belief that a party must be in place to take advantage of the coming opportunities.

By 1951, with the failure of their shared perspective to materialise, the tendency developed a theory that rejected traditional Leninism and saw the workers as being spontaneously revolutionary. This was borne out for them by the 1949 U.S. miners' strike. In later years, they were to pay close attention to , especially in the , which they came to see as paradigmatic of a new stage of . This led to the tendency leaving the SWP again to begin independent work.

After more than a decade of developing the theory of , Dunayevskaya deepened her study of the Hegelian , taking on a task the Johnson-Forest Tendency had set itself: exploring Hegel's "". She discovered in Hegel's Absolutes a dual movement: a movement from practice that is itself a form of theory and a movement from theory reaching to philosophy. She considered these 1953 letters to be "the philosophic moment" from which the whole development of flowed.

In 1954-1955 Dunayevskaya and C.L.R. James split. In 1955, she founded her own organization, , and a Marxist-Humanist newspaper, "", which remains in publication today. The newspaper covers women's struggles, the liberation of workers, people of colour, gay, lesbian, bisexual and transsexual rights and the disability rights movement, while not separating that coverage from philosophical and theoretical articles.

In the last year of her life she was working on a new book which she had tentatively titled, "Dialectics of Organization and Philosophy: The 'Party' and Forms of Organization Born Out of Spontaneity." [Many of her writings that were part of the process of work on the projected book are included in Volume XIII of the Supplement to the Raya Dunayevskaya Collection.]

"Marxism and Freedom: from 1776 Until Today"

Published in 1958, this is the first expression in book form of Raya Dunayevskaya's Marxist Humanism. A central theme of "Marxism and Freedom" is Dunayevskaya's assertion that the "movement from practice is itself a form of theory." This concept was developed by Dunayevskaya from a direct encounter with Hegel's dialectical philosophy and particularly his Absolutes, which she interpreted as posing a dual movement from practice to , and from theory to practice. Blacks, workers, women, and youth struggling for freedom were not faceless masses to be led, she held, but the source of new stages of because in their very actions was embedded a theory of human liberation. One example of this is the West Virginia Miners General Strike of 1949-1950, where Dunayevskaya pointed out that instead of merely demanding higher wages, the workers were asking questions such as, "What kind of labor should man do?" and "Why should there be such a gulf between thinking and doing?" She based the book's structure on her view that history and theory emanate from the movement from practice.

The book aimed to "establish the theory of on native grounds." The , the movement, the , and the fight for the by American workers, and were seen by her as revolutionary American struggles which provided fertile ground for the of . Dunayevskaya analyzed the latter struggles as making "historic contributions" to Marx's thinking, especially in the structure and content of his major theoretical work "Capital". The new stage of in production--whether in the mines with the "continuous miner" (a machine the miners called a "mankiller") or in the auto shops--with its consequent speed-up, was also seen by Dunayevskaya as a new stage in American worker revolt.

The 1958 edition of "Marxism and Freedom" contained the first published English translations of Karl Marx's and of 's notebooks on Hegel's "". She felt a false division had been made between the "" of 1844, and the "" of "Capital." Rather, she saw Marx's complete body of work as a development of 1844, where he broke with bourgeois society and labeled his own thought "a thoroughgoing Naturalism, or ."

Among those who argued for separating Marx into two distinct thinkers--one young and idealistic and the other mature and scientific--were theoreticians. Dunayevskaya believed the turned Marxism into its opposite--the theory and practice of and post- USSR--and signaled a new stage of world
. "Marxism and Freedom" presented an analysis of the USSR's economy as state-capitalist--rather than , , or a --based on Marx's economic categories and official Soviet statistics. She pointed to the and the as more than revolts against Communism, because they based themselves on Marx's Humanism. Later editions added critical analyses of and his .

Marxist intellectual and thinker wrote the preface to the first edition of "Marxism and Freedom", and Scottish Socialist wrote a preface to the British edition. The 2000 edition featured a new foreword by U.S. Green Party activist and social theorist .

* "He who glorifies theory and genius but fails to recognize the "limits" of a theoretical work, fails likewise to recognize the "indispensability of the theoretician." All of history is the history of the struggle for freedom. If, as a theoretician, one's ears are attuned to the new impulse from the workers, new "categories" will be created, a new way of thinking, a new step forward in philosophic cognition." &ndash;from "Marxism and Freedom"

* "Precisely where Hegel sounds most abstract, seems to close the shutters tight against the whole movement of history, there he lets the lifeblood of the dialectic &ndash; absolute negativity &ndash; pour in. It is true Hegel "writes" as if the resolution of opposing live forces can be overcome by a mere thought transcendence. But he has, by bringing oppositions to their most logical extreme, opened new paths, a new relationship of theory to practice, which Marx worked out as a totally new relationship of philosophy to revolution. Today's revolutionaries turn their backs on this at their peril." &ndash;from "Philosophy and Revolution"

* "It is true that other post-Marx Marxists have rested on a truncated Marxism; it is equally true that no other generation could have seen the problematic of our age, much less solve our problems. Only live human beings can recreate the revolutionary dialectic forever anew. And these live human beings must do so in theory as well as in practice. It is not a question only of meeting the challenge from practice, but of being able to meet the challenge from the self-development of the Idea, and of deepening theory to the point where it reaches Marx's concept of the philosophy of 'revolution in permanence.'" &ndash;from "Rosa Luxemburg, Women's Liberation, and Marx's Philosophy of Revolution"