The Cowal Highland Gathering (also known as the Cowal Games) is an annual Highland games event held in the Scottish town of Dunoon, Argyll, over the final weekend in August.

The first Cowal Games was held in Dunoon in 1894, and attracted fewer than 2,000 spectators. By 1901, attendances reached 5,000, and the first overseas competitor, an American athlete, took part.[1]

1906 saw the introduction of a pipe band competition. In 1929, the first approaches from Scottish societies overseas were received, and this has continued as expatriates the world over have turned to Dunoon for advice and practical assistance in setting up their own Gatherings.[2] 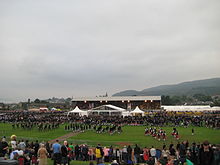 Pipe bands filing into the stadium for the salute to the chieftain and the award announcements.

After a break during the years of World War II, the first post-war Gathering, in 1946, attracted attendances of 28,000. However, the record attendance, to date at least, was in 1950 when 30,000 visitors attended,.[3] one of whom was then-Prime Minister Clement Attlee.[4]

In 2000, changes to the Highland dancing format resulted in the Friday becoming a high-profile day, with the top dancers out to qualify for Saturday's finals. The Solo Bagpipe competition introduced a graded system. Shinty was reintroduced, attracting high-calibre competitions.

2003 saw Cowal extended to a three-day event with the introduction of the Scottish National Highland Dancing Championships and the five-kilometre Cowal Run.

The 2007 event saw controversy when it was announced that the committee had decided to abandon the track, athletic and shinty competitions. It was rumoured that this was due to pressure from the pipe bands to allow the crowd to come closer. A number of changes were introduced to the layout of the pipe band competition this year which allowed the spectators to get closer to the bands as they competed. These changes were well received by the piping community and spectators in general. 2007 also saw the introduction of the Ceilidh tent which was headlined by the Red Hot Chilli Pipers in 2008 and 2009. The tent has been very popular and is now a permanent addition to the event. The "controversy" was short lived as the new elements of the event and changes to layout were extremely positive with all elements of the crowd.[citation needed]

Other changes made in 2007 were the introduction of a Most Entertaining Band competition and the mace-over-the-bar competition, both of which are light-hearted events allowing the bandsmen to let their hair down whilst entertaining the crowds.

In 2009 a children's entertainment tent was added to the attractions as was an upgraded food court featuring "Food from Argyll" a collection of local producers who bring the best of fresh, local produce to the event.[5]

Nowadays, the Cowal Games attracts more than 3,500 competitors, with many coming from overseas countries, including Canada, USA, Australia, New Zealand and South Africa. Dunoon regularly welcomes around 15,000 to 20,000 visitors for the Games, doubling the town's population for the weekend.[6]

On the Saturday morning, on average, 150 pipe bands arrive to contest the Cowal Championships. The day starts with all the bands marching from Dunoon pier, up Argyll Street, Dunoon's main thoroughfare, to the stadium, a distance of approximately one mile. On completion of the day's events, the bands close the Gathering with the landmark ceremony which is unique to Cowal: the march-past [7] and salute to the chieftain of the Games by 3,000 pipes and drums. The bands then march back to the pier, displaying the trophies they have won on the day.

As a result of the changes that the Gathering introduced for the 2007 event, and the positive feedback from competitors and spectators alike, discussions involving the RSPBA have resulted in a new three-year deal being agreed commencing with the 2008 Gathering.[citation needed]

The Cowal Gathering is host to some of the most prestigious highland dancing competitions in the world, including the World Championships. Around 750 dancers compete over the three days with many travelling from Canada the USA, Australia and New Zealand.[citation needed]

The finals of the Championships takes place on the Saturday of the event.[citation needed]