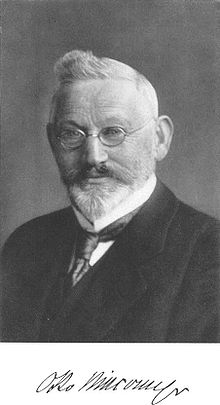 Otto Ludwig Binswanger (October 14, 1852 – July 15, 1929) was a Swiss psychiatrist and neurologist who came from a famous family of physicians; his father was founder of the Kreuzlingen Sanatorium, and he was uncle to Ludwig Binswanger (1881-1966) who was a major figure in the existential psychology movement. He was brother-in-law to physiotherapist Heinrich Averbeck (1844-1889).

After receiving his medical degree in 1877, Binswanger became an assistant to Theodor Meynert in Vienna. Afterwards he worked in Göttingen at the psychiatric clinic under Ludwig Meyer, and later at the pathological institute in Breslau. In 1880 he was appointed chief physician under Karl Friedrich Otto Westphal in the psychiatric and neurological clinic at Charité Hospital in Berlin. From 1882 until 1919 was a professor and director of psychology at the University of Jena. In 1911 he attained the title of Rector at the university.

Binswanger wrote over 100 publications, most notably on epilepsy and hysteria. With neurologist Ernst Siemerling (1857-1931) he was co-author of an influential textbook on psychiatry titled Lehrbuch der Psychiatrie (1904). His name is attached to the eponymous Binswanger disease, which is subcortical dementia characterized by loss of memory and intellectual faculties. One of his more famous patients was German philosopher Friedrich Nietzsche, others were the writers (later on) Hans Fallada and Johannes R. Becher.