Chicago American,[1] an afternoon newspaper in Chicago, Illinois, was the last flowering of the aggressive journalistic tradition depicted in the play and movie The Front Page.

Its first edition came out on the July 4, 1900 as Hearst’s Chicago American. Its companion Morning American came out in 1902 (Examiner as the Sunday Edition) and was replaced by the Examiner in 1907. 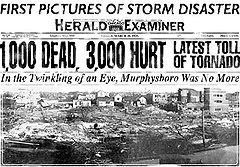 Chicago Herald-Examiner headline; in reality, the death toll was in excess of 695, not 1,000

Distribution of the Herald Examiner after 1918 was controlled by gangsters. Dion O'Banion, Vincent Drucci, Hymie Weiss and Bugs Moran first sold the Tribune. They were then recruited by Moses Annenberg who offered more money to sell the Examiner, later Herald-Examiner. This "selling" consisted of pressuring stores and news dealers.

Under pressure from his lenders, Hearst consolidated the American and the Herald-Examiner in 1939. It continued as the Chicago Herald-American until 1953 when it became Chicago American. The American was bought by the Chicago Tribune in 1956, and was re-named as Chicago's American. As with many other afternoon dailies, the paper suffered in postwar years from declining circulation figures caused in part by television news and in part by population shifts from city to suburbs. The paper continued as an afternoon broadsheet until 1969 when the Tribune converted the paper to the tabloid-format Chicago Today. Measures to bolster the paper were unsuccessful, and Chicago Today published its final issue on September 13, 1974. The Chicago Tribune inherited many of the Today's writers and staff and became a 24-hour operation.

The American was the product of the merger or acquisition of 14 predecessor newspapers and inherited the tradition and the files of all of them.

As an afternoon paper, the American was dependent on street sales rather than subscriptions, and it was breaking news that brought street sales. The American was noted for its aggressive reporting. Its editors, writers, and photographers went hard after every story. It was not uncommon for them to pretend to be police officers or public officials to get a story, although many of them could simply talk their way into any place.

These techniques were usually used legitimately. Reporters would demand information as if they had a right to it and would often get it. With its connections to news sources and its bravado, the small staff of the American regularly scooped its larger, more respectable afternoon competition, the Chicago Daily News.

When Frank Lloyd Wright announced plans to build a mile-high building in Chicago, the American stole the drawings and printed them.[citation needed] " The tradition was exemplified by the longtime night city editor of the American, Harry Romanoff, "Romy," who could create news stories almost at will with only a telephone. Running the city room at night with the help of two rewrite men (including Mike McGovern, noted below), one night photo editor, a sports desk editor ([Brent Musburger]]'s first job out of journalism school) and one night copy boy who "cut and pasted AP and UPI wires for Harry's review). Since the afternoon paper was put together the previous evening, the night city editor was the key news editor. Moreover, "Romy" a stout, cigar-chomping, suspendered, order-barking commander of the city desk enjoyed the fearful but absolute regard of pressmen, the composing room and the entire night staff of the Tribune Tower which owned and housed the Chicago's American operations in its final decades.

One night floods threatened southern Illinois, and the American did not have a big story for the front page. Romanoff called fire departments and police stations throughout the region, posing as "Captain Parmenter of the state police" (a nonexistent individual) urging them to take action. One fire department, bemused by the call, asked what they should do. "Ring those fire bells! Call out the people!" Romanoff then turned to his rewrite man to dictate the lead story:

Fire bells rang over southern Illinois as police and fire departments called out the people to warn them of impending floods.

It never did flood, but the American had its banner headline. These headlines were necessary for sales of the early editions. Later in the day, breaking news would generally replace them or reduce their importance. Of course, many stories developed in this way were genuine scoops that would be expanded in later editions.

The American gave the same attention to smaller stories as to large ones. It was always first with police news. One notable headline:

Mother of 14 kids kills father of 9 in police station

In the end, TV news brought an end to most afternoon papers, but up until the 1970s, Chicago had a competitive journalistic scene unmatched by most other American cities, five daily newspapers and four wire services in competition, and none more competitive than Chicago's American.

The American's predecessor and successor newspapers