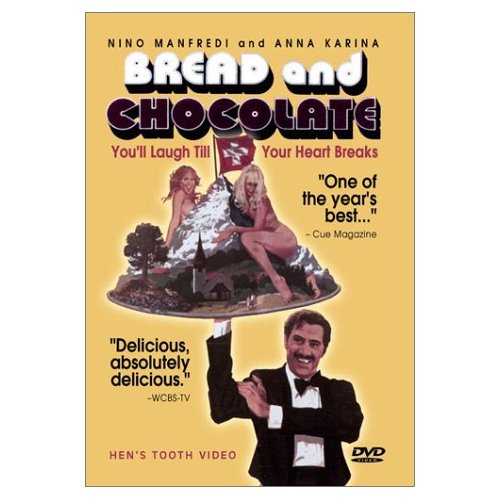 
"Bread and Chocolate" ( _it. Pane e cioccolata) is a 1974 Italian film directed by . This film chronicles the misadventures of an Italian immigrant to and is representative of the "" film genre.

Like many s of the period (1960s to early 1970s), Nino Garofalo () is a migrant "guest worker" from , working as a waiter in . He loses his work permit when he is caught urinating in public, so he begins to lead a clandestine life in Switzerland. At first he is supported by Elena, a Greek woman. Then he befriends an Italian , relocated to Switzerland because of financial problems. The industrialist takes him under his wing, only to commit suicide when he squanders his last savings. Nino is constrained to find shelter with a group of clandestine s living in a chicken coop, together with the same chickens they tend to in order to survive. Captivated by the idyllic vision of a group of young blonde, youths, he decides to dye his hair and pass himself off as a local. In a bar, when rooting for the during its transmission, he is found out . He is arrested and deported. He embarks on a train and finds himself in a cabin filled with returning Italian guest workers. Amid the songs of "sun" and "sea", he is seen having second thoughts. He gets off at the first stop: better life as an illegal immigrant than a life of misery.

* "Bread and Chocolate" won several international wards including the Silver Bear at the 1974 .
* 1978