Martin Mull (born August 18, 1943) is an American actor who has starred in his own television sitcom and acted in prominent films. He is also a comedian, painter, and recording artist. He is a satirist and incorporates his comedic sense into all of his work.

Mull was born in Chicago, Illinois, and moved with his family to North Ridgeville, Ohio, when he was two years old. They stayed there until he was to 15 years old, when his family moved to New Canaan, Connecticut, where he attended and graduated from public high school.[1] He studied painting and went on to graduate from the Rhode Island School of Design with a Bachelor of Fine Arts and a Master of Fine Arts in painting.

Following a period of stand-up comedy performances and comedic song recordings including opening for Frank Zappa at Austin's Armadillo World Headquarters in 1973 and for Bruce Springsteen at the Shady Grove Music Fair in Gaithersburg, Maryland, in October 1974, his first famous role was as twins Garth and Barth Gimble in the television nighttime absurdist soap opera Mary Hartman, Mary Hartman (1976), which led to spin-off comedy talk shows Fernwood 2 Night (1977) and America 2-Night (1978), in which he played Barth Gimble as talk show host, opposite Fred Willard as sidekick Jerry Hubbard. In one episode of The Golden Girls, he played a hippie who was afraid of the outside world. In the mid-1980s, he appeared in a series of Pizza Hut commercials. In 1979, he appeared in the Taxi episode "Hollywood Calling". During 1984, Mull starred in a CBS sitcom, Domestic Life, with Megan Follows playing his teenaged daughter. He had a long-running role playing Roseanne Conner's gay boss on the TV series Roseanne. He has appeared as a guest star on the game show Hollywood Squares, appearing as the center square in the show's final season. During 2008 and 2009, Mull guest starred in two episodes of the television series Gary Unmarried as Allison's father.[2] 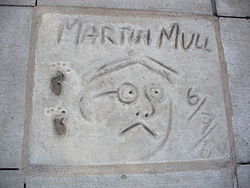 He has acted in feature films, including:

During the 1980s, Mull starred in a series of commercials for Michelob and in a series of television and radio commercials for Red Roof Inn (a chain of budget-oriented hotels. Mull voiced the role of The Evil Cad on Freakazoid! He also did the voice of Vlad Masters/Vlad Plasmius, the main villain on Danny Phantom. In late 2004, he portrayed "Gene Parmesan", a private investigator on the TV series Arrested Development.

In the animated series Family Guy, the name of the elementary school is Martin Mull Elementary.

Twice divorced, Mull is married to singer Wendy Haas. The two have a daughter, Maggie.