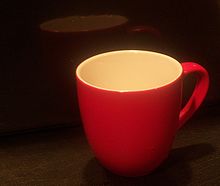 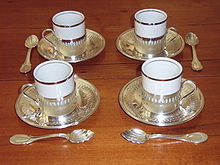 /ˈdɛmɨtæs/; French: "half cup") is a small cup used to serve Arabic coffee or espresso. In some languages it is called fincan, fildžan, filxhan or φλιτζάνι (flidzáni). In Spanish, it is called a pocillo.

It typically has about 60–90 ml (2–3 fl oz) capacity — half the size of a full coffee cup (a tasse à café is about 120 ml (4 fl oz)). Typically they are made of white pottery or porcelain and accompanied by matching saucers, but some coffeehouses and china companies also produce brightly decorated varieties.[1][2] Another type of demitasse has a glass cup set into a metal frame.

In May 2008 the international office of the Guinness Book of World Records confirmed the Ipswich City Council's Mayor's collection of 650 sets of demitasse cups (1500 individual cups) is the biggest collection in the world.[3] The Mayor of Ipswich Cr Paul Pisasale[4] has been collecting demitasse for over 15 years.