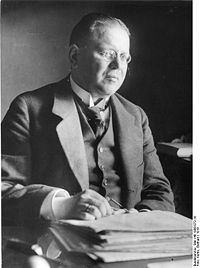 Matthias Erzberger (20 September 1875 – 26 August 1921) was a German politician. Prominent in the Centre Party, he spoke out against the First World War from 1917 and eventually signed the Armistice with Germany for the German Empire. He was assassinated for this act by the Organisation Consul.

He was born in Buttenhausen in the Kingdom of Württemberg, the son of a craftsman. In his early life he gained massive weight, which he lost in the course of thirty years. He started his career as a national school teacher. In 1896, he became a journalist working for the Deutsches Volksblatt.[1] Erzberger joined the Centre Party and was first elected to the Reichstag in 1903. By virtue of his unusually varied activities, he took a leading position in the parliamentary party. He occupied himself in particular with colonial questions.[1]

During the Great War

Like many of his party, he initially supported Germany's involvement in World War I. He drafted Germany's war aims that were published on 9 September 1914.[2] By this stage he was rapporteur to the Reichstag's Military Affairs Committee, and the "right-hand man" of the Chancellor Bethmann-Hollweg. He wrote letters to leading military authorities, later published, with extravagant plans for German annexations.[1] Seen as an opportunist, he was said to have "no convictions but only appetites".[3]

By mid-1917, however, with the armies stalemated on both fronts, he had come to a change of heart, which he elucidated in a brilliant speech in the Reichstag on July 6, in which he called on the government to denounce territorial ambition and urged a negotiated end to the war. The speech was remarkable at the time in that he carefully delineated the extent of German military weakness. Two weeks later, on the 19th, he put to the vote what he called a 'Peace Resolution', embodying all the points he had made in his speech. The resolution passed 212 to 126, and even received the support of Erich Ludendorff's nominee in the Reichskanzlei, Chancellor Georg Michaelis. But the Chancellor had hamstrung the resolution by adding to his support the proviso 'as I interpret it', which he then used as an excuse to completely ignore its prescriptive power.

In March 1918 Erzberger was the most influential supporter in government of the candidacy of Wilhelm, Duke of Urach for the proposed throne of the still-born Kingdom of Lithuania. He and Duke Wilhelm were both Catholics from Württemberg.[4]

Erzberger's political attempts failed, but by his very public attack on the war effort, and his dissemination of information about the fragility of the German military he created a climate in which the government found it increasingly difficult to maintain the belief that the war could be won. When, towards the end of the war, the German Navy mutinied at Kiel, the sailors informed their officers that what they wanted was 'Erzberger' — his name by then being synonymous with 'peace'. 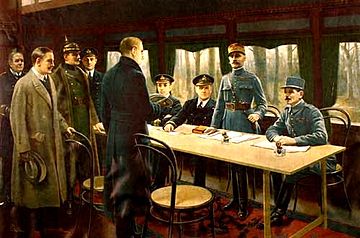 In October 1918, Erzberger entered the government as a Secretary of State after he had contributed to bring about the fall of Bethmann Hollweg.[1] Prince Max von Baden's last act as Chancellor was to send Erzberger on 7 November 1918, to negotiate with the Allies in the Forest of Compiègne. He supposed that Erzberger, as a Catholic civilian, would be more acceptable to the allies than a Prussian military officer; in addition, he believed that Erzberger's reputation as a man of peace was unassailable. This decision was to have unexpected ramifications in the years that followed.

Over the next few days, Erzberger obtained important concessions from Ferdinand Foch, the chief Allied negotiator; but he was unsure whether he should hold out for further changes in Germany's favour. Paul von Hindenburg himself telegraphed back that the armistice should be signed, modifications or no. A while later, the new Chancellor, the socialist Friedrich Ebert, telegraphed authorizing Erzberger to sign.

As the head of the German delegation, he signed the armistice ending World War I on 11 November 1918 at Compiègne with French representative Ferdinand Foch. He made a short speech on the occasion, protesting the harshness of the terms, and concluded by saying that "a nation of seventy millions can suffer, but it cannot die". Foch ignored Erzberger's attempt to shake his hand and is said to have replied, "Très bien".

Returning to Berlin, Erzberger agreed to serve under Ebert as Chairman of the Armistice Commission, a difficult and humiliating task. He fell out with Ulrich Graf von Brockdorff-Rantzau in early 1919 for advocating handing over Karl Radek, the Bolshevik diplomat and agitator, to the Entente following the collapse of the German Revolution.

After the elections for the national assembly, Erzberger entered the new government of the German Republic and was appointed finance minister in August 1919.[1] He endorsed the Treaty of Versailles. He was treated with particular contempt by the right wing, as the man who had signed what was coming to be viewed as a humiliating and unnecessary surrender. But he succeeded in forcing new taxation measures through the national assembly.[1] He taxed luxuries and war profits, and replaced all provincial taxes with a uniform central tax code; the German tax code to this day bears his imprint. He thus stabilized national finances, and reduced the financial independence of states. He reformed and unified the Deutsche Reichseisenbahnen, which began to make a profit for the first time and helped pay the war reparations.

In his disputes with the right, he set himself in particularly sharp opposition to the German National Party (the old conservatives), on whom he laid the responsibility for the war; the result was a personal dispute with the leader of the Nationalists, the former Secretary of State for the Treasury, Karl Helfferich, and Erzberger was ultimately compelled to bring an action against Helfferich for slander. The action resulted in Helfferich's being condemned to pay a small fine (German law did not admit of any damages or penalties for slander); the court, however, in its judgment took the line that Helfferich's allegations regarding Erzberger's corrupt business practices and untruthful statements on the part of Erzberger were justified. Erzberger was consequently compelled by his party to resign his ministerial office[1] in March 1920. During the case, an attempt was made upon Erzberger's life as he was leaving the court, leaving him rather seriously wounded.[1]

Erzberger was once more returned to the Reichstag at the general election of January 1920, but in accordance with the wish of his party abstained from immediate participation in politics, as proceedings had been instituted against him on a charge of evading taxation. In 1920, he published a memorandum endeavouring to justify his policy during the war, and he followed it with disclosures regarding the attitude of the Vatican in 1917 and the mission of the papal legate in Munich, Pacelli, to Berlin.[1]

Erzberger's power in German politics was based upon his great influence with the Catholic working classes in the Rhineland and Westphalia, in central Germany and in Silesia. In the industrial regions of these districts the Catholic workmen were organized in their own trade unions on lines of very advanced social policy, and Erzberger became the leading exponent of their views in the Reichstag and on public platforms. On the other hand, he incurred the strong opposition of the conservative and landed section of the Catholics, of some of the higher clergy like Cardinal Archbishop Felix von Hartmann of Cologne and of the Bavarian agricultural interest as represented by the Bavarian Catholic People's Party in the Diet at Munich and in the Reichstag in Berlin.[1]

Erzberger continued to be pursued by the relentless animosity of the reactionary parties, the conservatives (now called Deutsch-Nationalen) and the national liberals (now styling themselves the Deutsche Volkspartei). This hostility, which amounted to a vendetta, was based, not so much upon Erzberger's foreign policy — his negotiation of the Armistice terms and the decisive influence which he exercised in securing the acceptance of the Treaty of Versailles — as upon his financial policy both as finance minister in 1919 and as the Democratic Catholic supporter and, it was said, the political adviser of the Catholic Chancellor of the Reich, Joseph Wirth, in the preparation in the summer of 1921 of a fresh scheme of taxation designed to impose new burdens upon capital and upon the prosperous landed interest.[1]

The denunciations of the conservative and national liberal press undoubtedly went beyond the ordinary limits of party polemics: the Tägliche Rundschau observed, in allusion to Erzberger's personal appearance, “he may be as round as a bullet, but he is not bullet-proof.”[1] The climax of these attacks was that Erzberger was murdered on 26 August 1921 in Bad Griesbach, a spa in the Black Forest (Baden). Due to his involvement with the Versailles Treaty, Erzberger was regarded as a traitor by members of the ultra-nationalist death squad Organisation Consul. Erzberger's assassins were smuggled out of Germany and were prosecuted only after World War II.

Erzberger is buried in the Catholic cemetery of Biberach an der Riss.

Erzberger was instrumental in preparing the German nation for peace and in ensuring that the Catholic Centre Party, the predecessors of today's Christian Democratic Union, retained a modicum of power in an increasingly radicalized Germany. His financial, federal and rail reforms transformed Germany. But his greatest, and most tragic legacy, was his signature, as a civilian, on the Armistice. This, despite the fact that the military was actively pressuring Erzberger to sign as soon as possible, was pointed to for decades afterwards as evidence for the Stab-in-the-Back Legend, under which the surrender was an act by scheming Socialist politicians for personal gain that defied the German Army's will to fight, and which later helped to propel Adolf Hitler to power. For his action, Erzberger was branded as one of the "November Criminals".