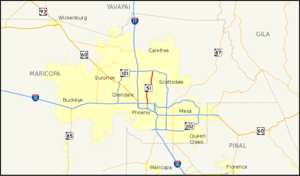 State Route 51 (SR 51), also known as the Piestewa Freeway, is a numbered in Phoenix, . It connects Interstate 10 in with Loop 101 on the north side of Phoenix, making it one of the area's major freeways. It is a largely north-south route and is known for traversing the Squaw Peak Recreation Area. Rapid growth and increased traffic demand of the east side of Metro Phoenix made the Piestewa Freeway necessary.

SR 51 is the lowest-numbered state highway in , but there is a proposed State Route 48, near Prescott. SR 51 was originally planned as an Interstate 510 but has never been numbered as such at any stage of completionFact|date=August 2008.

The southern terminus of SR 51 is located at an interchange with I-10 and Loop 202 immediately east of downtown Phoenix. It heads north from the interchange through the northern sections of Phoenix. The freeway travels through some major areas of Phoenix, and past some major services such as the Arizona Childrens Hospital, Arizona Heart Hospital and Heart Institute, and the Camelback Colonnade at 24th Street and Camelback Road. The highway then begins to climb to the top of the Dreamy Draw, a mountain passage between Camelback Mountain and North Mountain, before descending into the Paradise Valley area of North Phoenix. It reaches its northern terminus at an interchange with Loop 101 in northern Phoenix

The freeway was originally named the Squaw Peak Parkway. The name, which can be perceived as a derogatory term for Native American women, had caused ADOT to quietly remove the official term for a few years until specialist and Arizona native was killed in the . Both the freeway and the mountain were renamed after her on , .

There are plans to widen the Piestewa Freeway between Shea Blvd and the Loop 101 interchange to include a high occupancy vehicle lane in each direction and on ramps to Loop 101 eastbound. Construction began in the fall of 2007. [cite web|url=http://www.azdot.gov/Highways/Valley_Freeways/SR51/index.asp#FwyMap|title=State Route 51 (Piestewa Freeway)|author=|accessdate=2008-04-09]

The routing of the freeway was first established in 1968 under the designation of State Route 510 and the name Squaw Peak Freeway. [cite web|author=|accessdate=2008-04-14|date=1968-09-30|title=Arizona DOT Right-of-Way Resolution 1968-069|url=http://www.azhighwaydata.com/resolutions/?resnum=1968-%20-069] The original five miles (8 km) of the freeway between McDowell Rd and Glendale Ave were constructed by the city of Phoenix (as the Squaw Peak Parkway) between 1986 and 1991. The first overpass to be completed was in 1986 at Osborn Road.

In 1992, the southern portion was handed over to the . [cite web|author=Arizona Department of Transportation|accessdate=2008-04-14|date=1992-02-21|title=Arizona DOT Right-of-Way Resolution 1992-02-A-012|url=http://www.azhighwaydata.com/resolutions/?resnum=1992-02-A-012] Since then, it has been extended to Loop 101 and retrofitted with , standardized signage, an additional general purpose to create three lanes in each direction, and a new high occupancy vehicle lane up to Shea Blvd.

During much of the road's early days in the 1990s, several decorative pots were mounted on top of the noise mitigation walls, which were a source of controversy at the time of their installation due to cost and aesthetics, etc. One resident installed a gold toilet in protest. They were all taken down during the ADOT reconstruction project between McDowell Rd and Shea Blvd in 2000, however. [cite web|url=http://www.phoenixnewtimes.com/2008-01-24/culture/fifteen-years-after-the-squaw-peak-pots-debacle-the-phoenix-art-community-rallies-around-a-public-art-project-by/|title=Fifteen years after the Squaw Peak Pots debacle, the Phoenix art community rallies around a public-art project|publisher=|accessdate=2008-04-13]

The entire route is in Phoenix, Maricopa County.