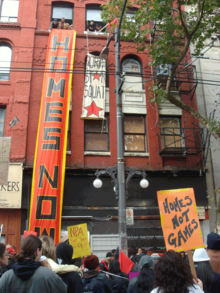 The North Star hotel, with banners hanging from the windows

The North Star hotel is a hotel in Vancouver, British Columbia, Canada, that has been vacant for a number of years. It is at 8 West Hastings Street.

At approximately 4 p.m. on October 22, 2006, organizers from the Vancouver Anti-Poverty Committee launched a march from Vancouver's Pigeon Park to the North Star hotel which was entered and declared a squat. The top floor of the building is being occupied by a handful of squatters while protestors remain outside.

Protestors claim the action was taken because of the failure of Vancouver's Non-Partisan Association (including Mayor Sam Sullivan) to purchase unused hotels and convert them into affordable housing. As Vancouver housing costs have increased dramatically in the past few years (now the most expensive housing market in Canada), protestors are concerned that buildings with single-room accommodation will all be converted to other, more expensive forms of housing. In 2006, hotel closures have led to a loss of as many as 200 housing units.[1]

At first the police resisted any immediate action. "We're not going to move in until there's any sort of health and safety issue or until we've heard from the owners," said Vancouver Police Constable Tim Fanning. "It's been very peaceful."[2] On October 24, however, 20 police officers announced a final warning and entered the North Star hotel to evict the six squatters inside. A group of protesters followed the police wagon on foot, protesting and blocking traffic. Vancouver APC organizers have declared their intention to occupy another building in the near future. [3]