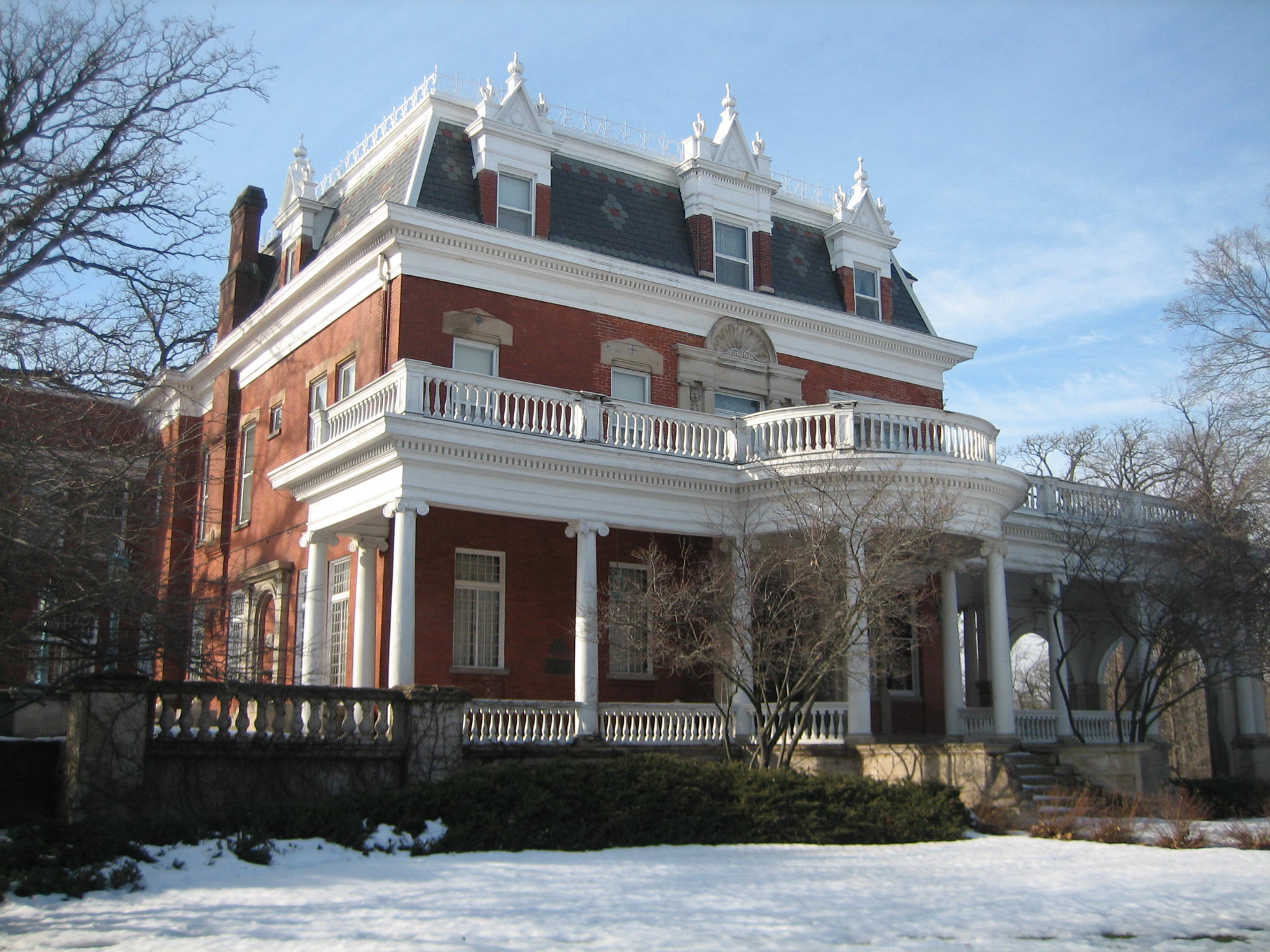 The Ellwood House was built as a private home by entrepreneur in 1879. It is located on First Street in DeKalb, , United States, in DeKalb County. The home, designed by , underwent remodeling in 1898-1899 and 1911. The house was originally part of 1,000 acres (4 km²) which included a large stable complex known as "Ellwood Green." Isaac Ellwood lived here until 1910 when he passed the estate to his son, Perry Ellwood.

After Perry Ellwood inherited the home he ed the interior and exterior, drastically altering the home's appearance. Thus, the Ellwood House incorporates elements from several architectural styles. The site contains four buildings in addition to the main house. A 50 foot (15 m) tall dominates the west side of the property while a 14 foot (4.3 m) tall miniature house is located nearer the main house. There is also a carriage house, which houses a visitor's center and a museum house that was once used to hold Harriet Ellwood's (Isaac's wife) collection of "curiosities." In 1964 the home was donated to the city of DeKalb and converted into a museum. The house was listed on the U.S. in 1975.

Construction on the original mansion began in April 1879, , a architect, designed the Ellwood Mansion for DeKalb barbed wire . At the time, Garnsey had designed other structures in DeKalb and Sycamore. By November 1879 the Ellwood family occupied the home. Newspaper accounts of the day put the cost somewhere between US$40,000 and $50,000.

The first remodeling work on the Ellwood Mansion took place as the 19th century drew to a close. The changes, commissioned by , were meant to reflect more popular architectural styles including the Georgian and . Many of the building's original Gothic features were replaced with more Classical elements. On the home's exterior, some of these changes can be observed in the addition of the and .

Perry Ellwood inherited the house in 1910, and, together with his wife, May Ellwood ( Gurler), altered the mansion once again.

During World War II, and after Perry Ellwood died in 1943, May Ellwood again altered the home; to save on , she had the upper floors of the house closed off.

The three-story brick house includes a full elevated basement and a with steeply pitched d s. Projecting from the roofline are plain corbeled s and iron gillwork, the original roofing material was . The 1879 version of the Ellwood House featured dormer ornamentation with work. The original windows were all double-hung and of modest size, occurring both singly and in pairs while showing a variety of designs. The original front (east) facade appeared much different than it does at present. The front entryway has been completely altered, due to Perry Ellwood's 1911 . The original entryway featured a one-story stone supported with two and two s. The square projecting porch bay was connected to the ground via 12 stone stairs. In the southeast corner of the house was a full three-story projecting tower set at a 45° angle to the rest of the front facade.

Perry Ellwood undertook major renovations which added and changed rooms in 1910. On the home's exterior the porte cochere was moved from the south facade to its present position on the north facade. On the south side of the home a large brick terrace was added and the conservatory moved from the southwest side of the house to the rear (west). The full-length tower on the home's southwest corner was entirely removed during this renovation.

The general layout of the home's interior has remained basically the same throughout the remodelings; the rooms on each floor are accessed via a large central which ends in an elegant rotunda. However, some of the changes made in 1910 and 1911 did alter the interior appearance. The was converted into the and the library was converted into the after an extension was added on. In the home's northwest corner a large was added, on the second-floor, the room above the kitchen became servant's quarters.

Upon entering the Ellwood House, guests of Isaac or Perry Ellwood would have been greeted or formally welcomed by members of the family. After Perry Ellwood inherited the house in 1910 the entry began to become known as the . Prominent among the library's features is a carved Italian mantle with a large gilt mirror hung above it. The library's bookshelves are cast in a Neo-Italian Renaissance style and constructed of fine mahogany. Presently filling the shelves in the Ellwood House are a large collection of books with Ellwood family nameplates. Near the library window, which is adorned with its original shutters, is an 1890s French statue. The statue was donated to the Ellwood House Association from someone in Sycamore who bequeathed it to the museum.

The 's underwent an extensive remodel in 1898 because of Ellwood's rise to national prominence through his barbed wire partnership with Joseph Glidden.

Shortly before her death in 1964 May Ellwood donated the house to the DeKalb Park District for use as a historic house museum.

The Ellwood House grounds hold several extant outbuildings as well: the museum house, the carriage house, the water tower, and the Little House.

The water tower is the only surviving structure from what was once a large facility owned by Isaac Ellwood. The complex, known as "Ellwood Green," was affiliated with the family's business. Two major structures within the complex, were the 1879 brick stable buildings, both of which featured mansard roofs. Those buildings, along with all other original stable buildings (save the water tower and including the home stable) were demolished through the years.

Another of the property's buildings, commonly called the carriage house, never lived up to its popular name. The building never housed any s; it was, in fact, built to house s.

The carriage house, today the Ellwood House Museum's Education and Visitors Center, was built by Perry Ellwood as a multi-car garage. It had a grease pit for automobile repair work. On the second floor was an apartment for the Ellwood family . The building originally had s on both sides so cars could drive in one side and out the other side of the structure. The original doors are on display inside the Ellwood House Visitors Center.

The one-story red Museum House, another of the site's outbuildings, stands to the south of the main house and was built in 1905 for Isaac Ellwood's wife Harriett. The Ellwood's grandchildren and other family members referred to the museum house as the "Curiosity Shop."

The Museum House is cast in style and was the last outbuilding constructed for Isaac Ellwood on the property. Today the Museum House's exterior appears much the same as it did when it was newly constructed but for many years the structure was badly deteriorated.

Between that time and 1973 the house had four or five other owners and it was moved several times. Eventually, the Little House wound up at the property of Mr. and Mrs. Burt Oderkirk, on Annie Glidden Road, where it again served as a playhouse for the couple's children. At this point it was painted white, with green shutters. In 1973 Mrs. Oderkirk donated Little House to Ellwood House Association and it was returned to its place on the Ellwood property.

The house is most significant for its connection to Isaac Ellwood, who has been given credit, in part, for 's invention of barbed wire. Glidden's patent was earlier, thus Ellwood's connection with the actual invention is vague.