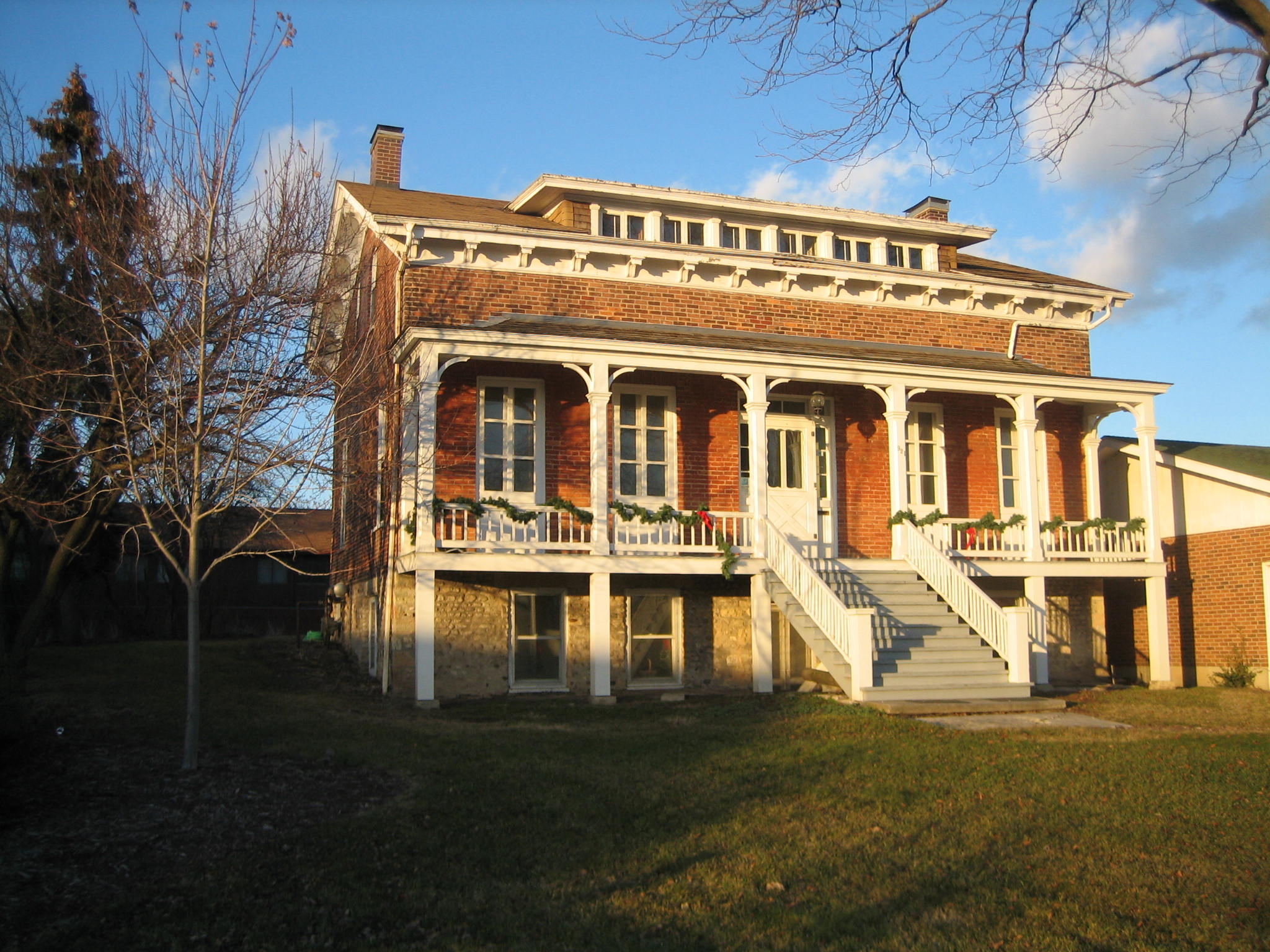 The Joseph F. Glidden House is located in the in the city of DeKalb. It was the home to the famed inventor of barbed wire . The barn, still located on the property near several commercial buildings, is said to be where Glidden perfected his improved version of which would eventually transform him into a successful entrepreneur. The Glidden House was added to the in 1973. The home was designed by another barbed wire patent holder in DeKalb, Jacob Haish.

The property contains the house and two outbuildings; the barn and the remains of an old windmill foundation. Constructed in 1861, the Glidden House adheres mostly to a style of architecture. The raised basement and full-length porch are two of the architectural elements found on the Glidden House that are consistently found in French Colonial homes. The barn, a building of high historical significance, was not included as part of the National Register listing for the property until 2002, nearly 30 years after the original nomination was approved.

The land that the Glidden House stands on is what remains of Glidden's once large DeKalb County farm. His holdings stretched along Lincoln Highway, both the north and south sides, from the Kishwaukee River in the east to present-day Annie Glidden Road on the west. The Glidden Farm went as far north as today's Lucinda Avenue. The farm's south border, near where Glidden would grant the right-of-way through DeKalb in the early 1850s, was near present-day Taylor Street.

The two-story Joseph F. Glidden House is constructed from locally fired brick, which is relatively soft. The softness of the brick has caused it to weather in a non-uniform fashion.

The land where the Glidden House stands once held a log structure, which Glidden lived in when he first came to DeKalb at the beckoning of cousin .

The house was built in 1861 for barbed wire entrepreneur Joseph Farwell Glidden. As his personal residence, the house, and its accompanying barn, were closely associated with his invention, really just an improvement, of barbed wire. Glidden's improvement upon a wire board fence developed by Henry Rose was of vast importance in the settlement of the United States west of the Mississippi. It was after Glidden saw Rose exhibit his wire at a fair in 1873 that he was struck with the idea of attaching barbs to wire strand fencing.

Day to day life at the Glidden House was mostly carried out in the home's basement which contained a full , and . The upper floors were used for guests and for sleeping quarters.

The home was mostly designed in a style, though it contains some elements of . French Colonial architecture was more popular in the than it ever was in the northern tier of states.

The two-story brick structure is supported by a foundation and still features its original front porch. The porch spans the length of the building's front (south) facade, at a height of about 6 feet.

The house stands mostly as it did in 1861 save a few alterations. The front porch was screened in at the time the building was added to the National Register of Historic Places,

The roof itself is a low gable and dominated by single stack, straddle ridge s at its east and west ends. The boxed roof trim is a decorated cornice.

The interior of the building is also similar to how it appeared when the house was constructed. However, a few changes have been made. In 1910 the two were replaced by brick. The flooring has been replaced as needed. The home's basement, once the main living area, has since been converted several times for other use.

On the first floor of the home the rooms remain much the same as they were when Glidden lived in the house.

On the house's east side are three rooms, whose original presence is open to debate.

The western part of the first floor is dominated by a large formal . The room has two entrances, one at the front of the hall, near the front door and the other at the back end of the hall. This was the room in which Elva Glidden married in the late 19th century. After 1941 the rear part of the living room, or "west" room, was walled off and a second kitchen added.

The basement, and for part of the home's history, the main living area, is accessed via a staircase at the back of the first-floor hall. The steep stairs still show years of wear. One of the rooms off the main basement is the kitchen where Glidden is said to have experimented with the coffee grinder and his wife's hair pins, eventually leading to his brand of barbed wire.

The second-floor served as the main sleeping quarters. It consists of a few simple bedrooms, all historically without closets. The upstairs hall contains a door which once accessed a staircase to the widow's walk, what remains of the space has been used as a closet for over a century.

The other outbuilding on the property along historic are the remnants of a once dominating . Though only the foundation remains, it gives a glimpse of how impressive the structure must have once been.

The Glidden Barn, located to the rear and east of the home, was thought to have been added to the when the original nomination for the house was approved in 1973. However, in the late 1990s, the revealed that the nomination included only the house.

The barn was built sometime around 1871, possibly even before, and is constructed of the same soft brick that makes up the exterior of the home.

In February 2007 the Glidden Homestead and Historical Center kicked off a fundraising drive. The drive is aimed at raising $2 million to expand the Joseph F. Glidden House site to include museum space and a media center. Some of the funds will be used to help restore the barn and expand historical center museum space into the building.

The Glidden barn is of pole and beam construction.

The east bay of the barn contains an animal stall in its northeast corner and a fully enclosed office in its opposite corner. The second-floor is supported by the two massive transverse beams.

The barn features extensive s, somewhat unique outside of s,

Only the foundation remains of the property's . What is left, ten rows of stone above the ground, is completely invisible when the home is viewed by passers-by on Lincoln Highway. The windmill started to fall into disrepair around the 1930s or 40s. The original, specific use of the windmill is unknown.