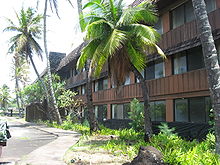 A building of the Coco Palms Resort with numerous rooms near the lobby.

Coco Palms Resort was a resort hotel in Wailuā, Kauaʻi, Hawaiʻi. The resort was visited by numerous movie stars and was also the scene of Elvis Presley's film Blue Hawaii. The resort has been closed since being hit by Hurricane Iniki in 1992. Currently there are no plans to reopen the hotel.

Coco Palms sits on a coconut grove. The grove was originally planted in 1896 with coconut tree nuts which were imported from Samoa by Mr. William Lindeman.

On January 25, 1953 the resort opened with only twenty-four rooms. However, the resort would expand greatly in the 1970s to around 400 rooms. This made Coco Palms the premier resort hotel on Kauai. The secluded island of Kauai and its ripeness in film making brought famous people like Frank Sinatra, Bing Crosby, Elvis Presley, royalty of Japan, and countless other celebrated personalities to the resort.

Within the resort is the 2,000-tree coconut grove, which is the largest of only three similar groves in the entire state of Hawaiʻi. The grove was originally planted with coconut tree nuts imported from Samoa by William Lindeman in 1896.

Originally opened on January 25, 1953, the Coco Palms Resort had 24 rooms, two guests and four employees. Under the management of Grace Guslander, the Resort grew to contain 416 rooms by the mid-1970s. However by 1984, the number of rooms had been reduced to 393. In August 1985, Wailua Associates acquired the resort from the Guslander/Amfac group. Grace was well known for her ability to embellish and create myths, stories and facts surrounding her resort. Under Grace Guslander's expanded interpretation of the Hawaiian practice of "akua" or replenishment, many noteworthy people took part in planting of new coconut trees in akua ceremonies to replenish the grove.

Some of these included Hawaiian Olympic swimming champion, Duke Kahanamoku, the von Trapp Family Singers, Bing Crosby and the Prince and Princess of Japan. These and many other trees are marked throughout the property with name and dated plaques. Grace helped foster the belief that the loko iʻa (fish ponds) on Coco Palms were once the "Royal" fish ponds of the Kauai Rulers.

The Coco Palms Resort achieved early exposure and fame in the 1961 Elvis Presley movie Blue Hawaii. Most of the last 20 minutes of the movie was shot on and near the grounds of the Coco Palms.

The ceremonial torch lighting ceremony "Call to Feast," which took place every evening at 7:30pm, for 40 years (until September 11, 1992 when the devastation of Hurricane Iniki struck the island of Kauaʻi), was featured in the film. This torch lighting ceremony was the original such event, copied in recent years by many other resorts and hotels in Hawaiʻi. An additional scene was the conch shell-blowing doorman greeting them upon check in at the lobby (which was modeled after an ancient Hawaiian Canoe Lodge).

The wedding ceremony, portrayed in the final scene where Elvis croons "The Hawaiian Wedding Song" to Joan Blackman as they ride their flower bedecked double hulled canoe through the lagoon to the Wedding Chapel, is credited with creating a high demand for weddings at the Coco Palms Resort. Prior to its close in 1992, the Resort hosted over 500 wedding ceremonies annually.

The Wedding Chapel was donated by Metro-Goldwyn-Mayer to Coco Palms in the mid 1950s after using it in the film Miss Sadie Thompson, which starred Rita Hayworth. Kauaʻi's former Mayor Maryanne Kusaka was married at the Coco Palms.

A Kauaʻi tour operator, Hollywood Movie Tours, stops daily with a van of tourists interested in seeing the grounds, lagoons, coconut grove and the #56 King's Cottage of the Coco Palms Resort.

The Wailuā area in which the property is located is culturally, spiritually and historically significant. The property is significant with many on Kauai because it is in very close proximity to three of the most important historical Heiaus on Kauai.

Nearby is the beginning point of the legendary walk of the aliʻi spirits on their path up the mountainside and around the island ("King's Trail"). The "Royal" Bell Stone, significant as the "blessing place" for over 1,000 years of Kauaʻi's rulers, prior to their births is less than one mile from the corner of the property. There are also important ancient burial sites throughout the area, including on the grounds of the property. In fact some believe the proper translation of Wailuā is "spirits".