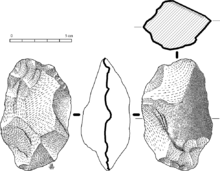 Abbevillian biface flake from the Douro river region near Valladolid, Spain. It is unretouched and is not distinguishable from Olduwan. The one small spot of smaller flaking on one edge may indicate that it is borderline between Olduwan and Acheulean. Both are found in Europe.

Abbevillian is a currently obsolescent name for a tool tradition that is increasingly coming to be called Oldowan (or Olduwan). The original artifacts were collected from road construction sites on the Somme river near Abbeville by a French customs officer, Boucher de Perthes. He published his findings in 1836.

Subsequently Louis Laurent Gabriel de Mortillet (1821–1898), professor of prehistoric anthropology at the School of Anthropology in Paris, published (1882) "Le Prehistorique, antiquité de l'homme", in which he was the first to characterize periods by the name of a site. Many of his names are still in use. His first two were Chellean and Acheulean.

Chellean included artifacts discovered at the town of Chelles, a suburb of Paris. They are similar to those found at Abbeville. Later anthropologists substituted Abbevillian for Chellean, the latter which is no longer in use.

The label Abbevillian prevailed until the Leakey family discovered older (yet similar) artifacts at Olduvai Gorge (a.k.a Oldupai Gorge) and promoted the African origin of man. Olduwan (or Oldowan) soon replaced Abbevillian in describing African and Asian paleoliths. The term Abbevillian is still used, but it is now restricted to Europe. The label, however, continues to lose popularity as a scientific designation.

Mortillet had portrayed his traditions as chronologically sequential. In the Abbevillian, early Palaeolithic hominins used cores; in the Acheulian, flakes. Olduwan tools, however, indicate that in the earliest Palaeolithic, the distinction between flake and core is less clear. Consequently, there also is a tendency to view Abbevillian as an early phase of Acheulian.

Provenience of the type

The Abbevillian type site is on the 150-foot terrace of the River Somme. Tools found there are rough chipped bifacial handaxes made during the Elsterian Stage of the Pleistocene Ice Age, which covered central Europe between 478,000 and 424,000 years ago.

The Abbevillian is a phase of Olduwan that occurred in Europe near, but not at, the end of the Lower Palaeolithic (2.5 mya. – 250,000 years ago). Those who adopt the Acheulian scheme refer to it as the middle Acheulian, about 600,000-500,000 years ago. Geologically it occurred in the Middle Pleistocene, younger than about 700,000 years ago. It spanned the interglacial between the Günz and the Mindel, but more recent finds of the East Anglian Palaeolithic push the date back into the Günz, closer to the 700,000 ya mark.

The Abbevillian culture bearers are not believed to have evolved in Europe, but to have entered it from further east. It was thus preceded by the earlier Olduwan of Homo erectus, and was supplanted by the classical Acheulian, of which Clactonian and Tayacian are considered phases. The Acheulian there went on into the Levalloisian and Mousterian associated with Neanderthal man.

Abbevillian tool users were the first Hominin inhabitants of Europe. They are generally conceded to be the immediate ancestors of Neanderthal Man, whose classification, though not entirely undisputed, is most often given as Homo sapiens neanderthalensis; that is, Neanderthal Man is a subspecies of modern man. Our own subspecies has for many generations been fixed at Homo sapiens sapiens.

Beyond these basic concessions, there is a dispute of a purely semantic nature. Three points of view are emergent:

"While the type is identified as Homo erectus, there are modifications that suggest it is filling a gap between Homo erectus and the Neanderthal."

"In Europe there are, as yet, no hominid[3] fossils classified definitely as typical Homo erectus remains; all of the more compete skulls have been classified by most authorities as forms of archaic Homo sapiens."

The Abbevillian became the European Acheulean and the Clactonian at about 500,000 ya. To avoid the question of what culture name should be used to describe European artifacts, some, such as Schick and Toth,[4] refer to "non-handaxe" and "handaxe" sites. Handaxes came into use at about the 500,000 ya mark.[5] Non-handaxe sites are often the same sites as handaxe sites, the difference being one of time, or, if geographically different, have no discernible spatial pattern. The hominins therefore are the same. The physical evidence is summarized in the table below, with links to the appropriate Wikipedia and other articles. Note that the dates assigned vary widely after 700,000 ya and, except where substantiated by scientific methods, should be viewed as tentative and on the speculative side.