Start of the race

The Silver State Classic Challenge is an authorized Open Road Racing event that is run on a 90 mi (140 km) stretch of State Route 318, which is closed for the occasion. The event has been run since 1988, and was the venue for the highest speed achieved on a public highway, when Charles "Chuck" Shafer and Gary Bockman averaged 207.7801 mph (334.3897 km/h) in May 2000,[1] in a Chrysler LeBaron ARCA race car. Although high speed race cars receive much of the publicity, the majority of participants take part in mainstream street cars at average speeds ranging from 95 to 150 mph (153 to 240 km/h). These cars run the gamut from sports cars like Corvettes and Mustangs to sedans like Infiniti G35s, Mercedes wagons, and even Saturns.

The event was first run on September 25, 1988, primarily as a showcase for vintage cars. With the assistance of the White Pine Chamber of Commerce and the Nevada Department of Transportation, a 90 mi (140 km) stretch of State Route 318 was closed for the day, and approximately fifty cars took part. The following year, a new record of 197.99 mph (318.63 km/h) was set by a 19 year old driver named R J Gottlieb, driving a race-prepared big-block powered 1969 Chevrolet Camaro Z-28. This run was well documented in a Hot Rod magazine article that year. In the years that followed, the organization became increasingly professional, with rules for safety, car preparation and driver experience becoming more stringent.

An additional event has been run each May since 1991, called the Nevada Open Road Challenge. This follows the same format and rules as the Silver State Classic Challenge, but cooler weather can lead to higher speeds for the fastest cars.

Drivers and optional navigators compete to set a specified average speed ("Target Speed") over the 90-mile (140 km) course. The start and finish time for each car is recorded against a GPS clock, and the average speed is calculated from the elapsed time. In each speed class, the winners are driver and navigator to achieve the speed closest to their target speed.

Currently there are four main classes, in which cars can achieve target speeds between 95 and 180 mph (153 and 290 km/h). The classes specify safety equipment levels required for cars, drivers and navigators, and a maximum "Tech Speed", which may never be exceeded. Radar traps are hidden along the course to enforce this rule. There is also an Unlimited Class, in which drivers compete to set the fastest possible time over the course.

Stock street cars with regular 3-point seatbelts may be run in this class. A hand held fire extinguisher must be fitted, while gloves and Snell approved motorsports helmets must be worn by drivers and navigators. First-time drivers must run in this class unless they have appropriate motorsports experience. At no time may the car exceed the Tech Speed of 124 mph (200 km/h).

In addition to a handheld fire extinguisher, gloves and Snell helmets, the car must be fitted with 5-point or 6-point harnesses and (from 2007) window nets or arm restraints for the driver and navigator (if present). Open cars must have a rollbar fitted. At no time may the car exceed the Tech Speed of 140 mph (230 km/h).

In addition to the above equipment, all cars must be fitted with a rollbar or equivalent roll-over protection. Drivers and navigators must wear fireproof racing suits. At no time may the car exceed the Tech Speed of 165 mph (266 km/h).

Over the weekend, there are also two drag events on a local stretch of closed-off highway. This is an unusual event, in that the 6,400 ft (2,000 m) altitude of Ely significantly reduces engine power, so the results are slower than similar events at lower altitude.

On Saturday, the High Noon Shootout takes place. This is a pure speed event, in which Touring and Grand Touring cars have half a mile to accelerate to the highest possible speed, while Grand Sports cars and above have a one mile (1.6 km) straight. In May 2007, a new record of 202 mph (325 km/h) was set by a modified Dodge Viper. However, the car was severely damaged in an incident on a subsequent run. In September 2007, the record was raised once again to 212 mph (341 km/h) by Mike Reichen driving a highly modified 1994 Evo II.

There were two fatalities in the first decade of the Silver State Classic Challenge.[2] In recent years, much more stringent safety rules have been enforced, with a particularly strong emphasis on the speed and load capacity of the tires. During 2003, a number of drivers questioned the effectiveness of the radio system used by course marshals to monitor cars and (if necessary) to call for medical assistance. This has been addressed through an improved radio communication system, including the loan of a basic 2-way radio to each competitor. Due to the lack of crash barriers, spectators are not permitted. The only way to watch the race is as one of the safety marshals who man every gate along the course. 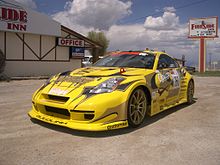 One of the event's partipicants is the Japanese car magazine Option founder Daijiro Inada,[3] a renowned figure in the import, and drifting scene. The video magazine spinoff, Video Option, recorded his attempts at the event in 1999 and from 2003 to 2006.[4] Due to driver error and equipment problems, the 2004 run was the only one he has so far completed successfully. His current car, the Option Stream Z,[5] is an unlimited category Nissan 350Z.

Another high profile participant, who has had more success, is former Dukes of Hazzard star John Schneider, who has competed on several occasions in the General Lee. 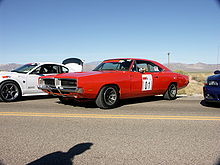 "Big Red" was built in 1987 by RJ and Dan Gottlieb on a 1969 Chevrolet Camaro for open road racing. The original car was destroyed in an accident in the La Carrera road race as the chassis were unable to handle the high power output. The second car was designed and built by Bill Osborne with a spaceframe tube chassis. Big Red was retired to a car museum in Laughlin, Nevada in 1996, and was revived for racing again in 2004 with a complete overhaul and restoration of the entire car.[6][7]