Comiket (コミケット, Komiketto?), otherwise known as the Comic Market (コミックマーケット, Komikku Māketto?), is the world's largest self-published comic book fair, held twice a year in Tokyo, Japan.[1] The first Comiket was held on December 21, 1975, with only about 32 participating circles and an estimated 600 attendees.[2] Attendance has since swelled to over a half million people.[1] It is a grassroots, DIY effort for selling dōjinshi, self-published Japanese works. As items sold in Comiket are considered very rare (because dōjinshi are seldom reprinted), some items sold at Comiket can be found in shops or on the Internet at prices up to 10 times the item's original price.

The continuing operation of Comiket is the responsibility of the Comic Market Preparatory Committee (ComiketPC).

Comiket was founded in 1975 by Yoshihiro Yonezawa and a circle of friends, including Teruo Harada and Jun Aniwa, while they were studying at Meiji University. They wished to study manga and explore its potential, as commercial offerings were unchallenging and mainstream, following the closure of COM.[3][4][5] Comiket was also founded as a freer form of the SF Taikai convention.[6] 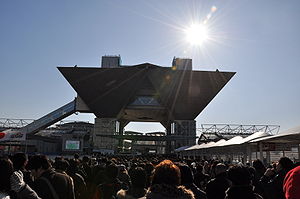 Comic Market is held twice a year; once in August, and once in December. These are typically referred to as NatsuComi (夏コミ, Natsukomi?) and FuyuComi (冬コミ, Fuyukomi?) (contractions of Summer and Winter Comiket) respectively. NatsuComi is three days long, and usually is held during the weekend around August 15. FuyuComi is two to three days long, and usually is held between December 28 and 31. The current convention location is the Tokyo Big Sight convention center near Ariake, in Odaiba, Kōtō, Tokyo. The major part of the convention runs from 10AM to 4PM, though the company booths run all the way until 5PM. On the last day of the convention, the company booths and Cosplay Square close an hour earlier, at 4PM and 3PM respectively.[7] Due to the popularity of the event, the official Comic Market website advises first-time attendees to arrive in the afternoon to avoid having to wait in line.[8] Those arriving at 10AM can expect to wait in line for about an hour before being able to enter. Attendees who arrive on the first train, can expect to wait about five hours before entering at roughly 10 or 10:30AM.[7]

By 1982, there were less than 10,000 attendees at Comiket, however, by 1989, there were over 100,000 attendees.[9] Approximately 35,000 sellers, known as circles, participated in Comiket as of 2001[update]. An estimated 510,000 attendees converge in the course of three days, but this number continues to increase. Because of the extreme number of people gathering in a single place, mobile phone companies set up temporary antennas that are usually employed when stationary antennas are out of service. Area hotels, trains, and bus services also make special arrangements to accommodate the large crowds. Comiket 76 from August 14–16, 2009 attracted an estimated 560,000 attendees.[10]

The catalog is not required for admittance, but without it the event is nearly impossible to navigate. Catalogs are often sold at tents in and around the event for the benefit of latecomers.

The CD-ROM edition of the catalog includes the following features:

To date, there is no English edition of the catalog available.

The Comiket website usually has a list of stores (by prefecture) where you can order the catalog. Please be aware that not all stores have the CD-ROM version and some may not have the print version. This is also on the list of stores on the Comiket homepage. Catalogs can be ordered from overseas, depending on the store. The catalog typically comes out two weeks before the convention, up until the first day of Comiket.

As the number of circles participating and number of participants increase rapidly, the event has become very crowded. In order to buy their favorite items (and especially famous items, such as dōjinshi from famous authors or special limited-edition items), thousands of people line up outside the Tokyo Big Sight convention center days before the event starts, causing serious security problems. Hence, in recent years lining up before the day Comiket is held on has been prohibited.