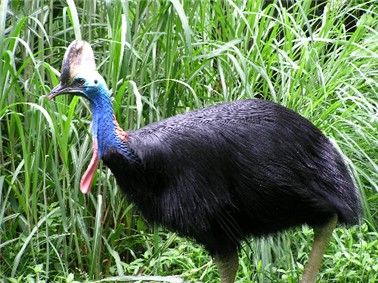 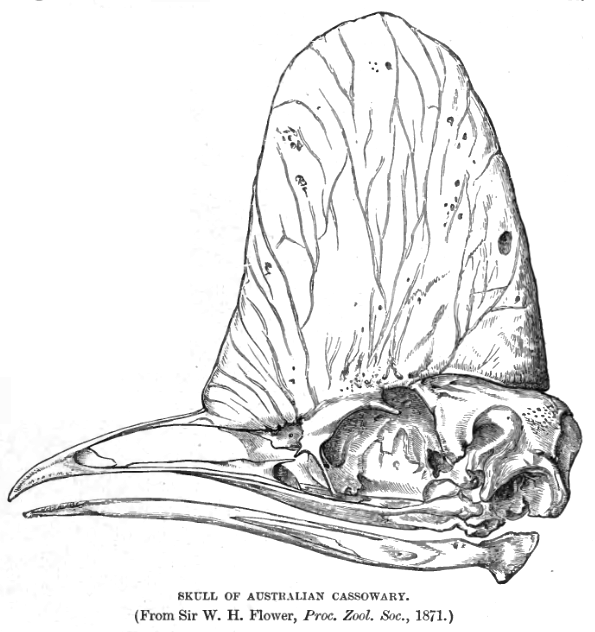 Cassowaries ( "Casuarius") are very large flightless s native to the s of and northeastern . The Southern Cassowary is the third largest flightless bird on the planet, [Two other, smaller species of Cassowary live in the highlands of New Guinea.] smaller only than the and . Cassowaries feed mainly on fruits, though all species are truly omnivorous and will take a range of other plant food including shoots, grass seeds and in addition to s and small s. Cassowaries are very shy, but when disturbed, they are capable of inflicting injuries to an adult human. Today, they are considered the most dangerous bird in the world. [The last person to have been killed by a cassowary was a sixteen-year-old boy, in 1926, according to Brendan Borrell, "Invasion of the cassowaries," "Smithsonian Magazine" (October 2008) p. 20.]

Cassowaries (from the Indonesian name "kasuari") are part of the group, which also includes the , rhea, , and , and the extinct and . There are three species recognized today:

The evolutionary history of cassowaries, as of all ratites, is not well known. A fossil species was reported from Australia, but for reasons of this assignment is not certain and it might belong to the prehistoric "emuwaries", "", which were cassowary-like primitive emus.

The Northern and Dwarf Cassowaries are not well known. All cassowaries are usually shy birds of the deep forest, adept at disappearing long before a human knows they are there. Even the more accessible Southern Cassowary of the far north s is not well understood.

A cassowary's three-d feet have sharp s; the -like middle claw is 120 mm (5 inches) long. This claw is particularly dangerous since the Cassowary can use it to kill an enemy, disemboweling it with a single kick. They can run up to 50 (32 mph) through the dense forest. They can jump up to 1.5 m (5 feet) and they are good swimmers.Fact|date=February 2007

All three species have horn-like crests called s on their heads. These consist of "a ous skin over a core of firm, cellular foam-like material".

Females lay three to eight large, pale green-blue eggs in each clutch. These eggs measure about 9 by 14 cm (3½ by 5½ inches) &mdash; only and eggs are larger. The female does not care for the eggs or the s; the male s the eggs for two months, then cares for the brown-striped chicks for nine months, defending them fiercely against all potential predators, including humans.Fact|date=February 2007

Cassowaries are ; fallen and fruit on low branches is the mainstay of their diet. They also eat , s, s, s, and s. They are a of rain forests because they eat fallen fruit whole and distribute seeds across the jungle floor via .

Cassowaries are native to the s of and northeastern . Some nearby islands also have small cassowary populations, but it is not known if these are natural or the result of the New Guinea trade in young birds.

Loss of habitat owing to the destruction of rainforest over the last 100 years has been the major factor in the decline of the Cassowary. For the last 20 years Mission Beach, Queensland, has experienced the greatest amount of lowland rainforest clearing in Australia. In the Mission Beach area alone, Cassowaries have lost about 50% of their critical habitat in the past ten years. The survival of many rainforest trees is tied to the Cassowary's .

Traffic is another big problem. Between 1st July and 30th September 2003 one Sub Adult bird was killed by a car in the Mission Beach area despite reduced speed limits, big warning signs and recent road improvements intended to make the roads safer for Cassowaries.

Hand feeding of Cassowaries poses a big threat to their survival. [Borrell 2008.] In suburban areas the birds are more susceptible to vehicles and dogs. Contact with humans encourages Cassowaries to take most unsuitable food from picnic tables.

Feral pigs are a huge problem. They probably destroy nests and eggs; but their worst effect is as competitors for food, which could be catastrophic for the Cassowaries during lean times. Pigs also contaminate water sources.

Dogs chase the birds away from potential food sources in suburban areas.

The 2004 edition of the lists the cassowary as the world's most dangerous bird. Normally cassowaries are very shy but when disturbed can lash out dangerously with their powerful legs. During American and Australian troops stationed in New Guinea were warned to steer clear of the birds. They are capable of inflicting fatal injuries to an adult human. Usually, attacks are the result of provocation. Wounded or cornered birds are particularly dangerous. Cassowaries, deftly using their surroundings to conceal their movements, have been known to out-flank organized groups of human predators. Cassowaries are considered to be one of the most dangerous animals to keep in zoos, based on the frequency and severity of injuries incurred by s.

Role in seed dispersal and germination

" were found to be much higher after passing through a cassowary's gut (92% versus 4%). [ [http://www.botany.unimelb.edu.au/plantphys/bruce/webber&woodrow2004a.pdf Webber, B.L. and Woodrow, I.E. "Cassowary frugivory, seed defleshing and fruit fly infestation influence the transition from seed to seedling in the rare Australian rainforest tree, Ryparosa sp. nov. 1 (Achariaceae)." "Functional Plant Biology" 31: 505-516.] .]