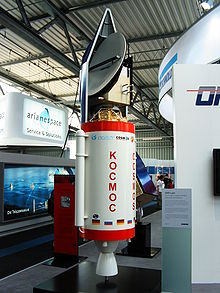 A model of a German SAR-Lupe reconnaissance satellite inside a Cosmos-3M rocket.

A satellite by itself is neither military nor civil. It is the kind of payload it carries that enables one to arrive at a decision regarding its military or civilian character.Ref N-1 Nevertheless, even the above distinction is now blurred. For example, a civilian satellite can carry military transponders and vice versa. Civil commercial satellites are also known to carry out military tasks including enabling military communications, imagery etc. At the same time, military satellites like the NAVSTAR GPS have more civilian users than military users. In spite of the above possibilities, satellites which have purely military uses are known as military satellites.

Use in U.S. Armed Forces

The U.S. Armed Forces maintains international networks of satellites with ground stations located in various continents. Signal latency is a major concern in satellite communications, so geographic and meteorological factors play an important role in choosing teleports. Since some of the major military activities of the U.S. army is in foreign territories, the U.S. government needs to subcontract satellite services to foreign carriers headquartered in areas with favorable climate. [1]