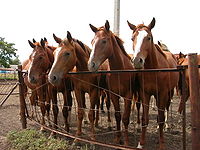 These young horses, though all the same color, exhibit uniquely different markings, which can be used to identify individual horses

A marking on a horse's muzzle showing pink skin under most of the white hairs, dark skin at the edges of the marking.

Note: This article is about individualized markings on any breed, type, or color of horse and does not discuss coat colors generally. For information on coat colors that produce genetically distinctive markings, see equine coat color.

Markings on horses usually are distinctive white areas on an otherwise dark base coat color. Most horses have some markings, and they help to identify the horse as a unique individual. Markings are present at birth and do not change over the course of the horse's life. Most markings have pink skin underneath most of the white hairs, though a few faint markings may occasionally have white hair with no underlying pink skin. Markings may appear to change slightly when a horse grows or sheds its winter coat, however the difference is simply a factor of hair coat length, the underlying design does not change.

On a gray horse, markings visible at birth may become hidden as the horse turns white with age, but markings can still be determined by trimming the horse's hair closely, then wetting down the coat to see where there is pink skin and black skin under the hair. 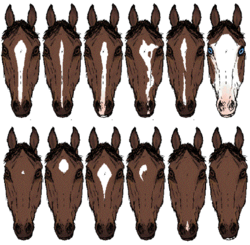 Facial markings are usually described by shape and location. There may be more than one distinct facial marking and if so, will be named separately. Occasionally, when a white marking extends over an eye, that eye may be blue instead of brown, though this is not consistently seen in all cases.

Additional terms used to describe facial markings include the following: 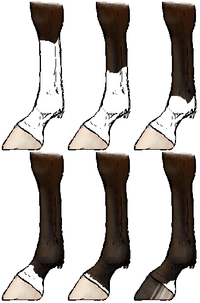 From tallest to shortest, common leg markings are:

Ermine marks, seen here on the coronary band, just above the hoof. 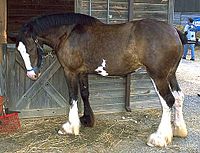 This horse has a belly spot. It also has a blaze and three stockings

Horses may have isolated body spots that are not large or numerous enough to qualify them as an Appaloosa, Pinto or Paint. Such markings are usually simply called "body spots," sometimes identified by location, i.e. "belly spot," "flank spot," etc. When this type of isolated spotting occurs, it is usually the action of the sabino gene.

Horses may develop white markings over areas where there was an injury to the animal, either to cover scar tissue from a cut or abrasion, or to reflect harm to the underlying skin or nerves. One common type of scarring that produces patches of white hairs are "saddle marks," which are round or oval marks on either side of the withers, produced by a pinching saddle that had been worn over a long period of time.

A white marking on the crest of a horse's neck artificially created by freeze branding, a form of marking for identification claimed to be nearly painless to the horse.

Birdcatcher spots are small white spots, usually between 1 mm and 1 inch (25.4 mm) in diameter. It is not yet known what controls their expression, although it is believed that they are not genetic. Birdcatcher spots occur in many breeds. These spots may occur late in a horse's life, or may occur and then disappear.

Ticking or Birdcatcher ticks are markings that involves white flecks of hair at the flank, and white hairs at the base of the tail, called a "skunk tail". These patterns are permanent and probably genetic. It is thought that this roaning effect might be linked to the rabicano gene. The name comes from a Thoroughbred horse named Birdcatcher, who had white hairs throughout his flank and tail

Scarring on a horse usually results in white hairs growing in over the injured area, though occasionally there may be no hair growth over the scar at all.

A hot brand on a horse. 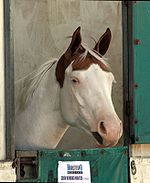 A tovero horse with blue eyes and "Medicine hat" markings.

Horses can be uniquely identified by more than just markings or brands. A few other physical characteristics sometimes used to distinguish a horse from another are: