The organization was founded in 1952 to develop aviation pressure suits and in-flight refuelling systems for the USSR's space research programme. In the 1960s it began to design space suits, including the one worn by Yuri Gagarin. In 1965, a Berkut spacesuit was worn during the first spacewalk.[1] The Orlan-M space suit was used by cosmonauts in the Mir space station. Zvezda became a joint-stock company in 1994. 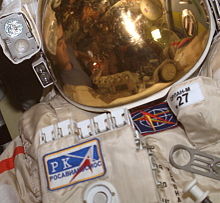 Zvezda is also Russia's primary manufacturer of ejector seats for Russian fighter aircraft. The K-36 ejector seat was studied at length by the US Navy and Air Force; IBP Aircraft opened up a factory in the US to manufacture it for the F-22 Raptor and the Joint Strike Fighter.[citation needed] The US Government, however, selected the Martin-Baker seat from the United Kingdom for their new fighter jet. For improved pilot survivability, the Russian Kamov Ka-50 "Black Shark" helicopter is fitted with a NPP Zvezda K-37-800 ejection seat, which is a rare feature for a helicopter.[2] Before the rocket in the ejection seat kicks in, rotor blades are blown away by explosive charges in the rotor disc and the canopy is similarly jettisoned.