Antler
This article is about the antlers of deer and related species. For other uses, see Antler (disambiguation). 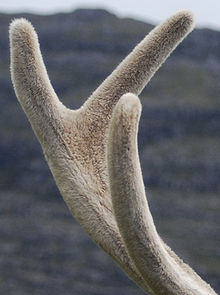 Velvet covers a growing antler and provides it with blood, supplying oxygen and nutrients.

Antlers are the usually large, branching bony appendages on the heads of most deer species.

Antler originally meant the lowest tine, the "brow tine". It comes from the Old French antoillier, of uncertain origin,[1][2] possibly from some form of an unattested Latin word *anteocularis, "before the eye"[3] (and applied to the word for "branch"[4] or "horn"[2]).

Antlers are unique to cervids and found mostly on males: only caribou and reindeer have antlers on the females, and these are normally smaller than those of the males. Nevertheless, fertile does from other species of deer have the capacity to produce antlers on occasion, usually due to increased testosterone levels.[5]

Each antler grows from an attachment point on the skull called a pedicle. While an antler is growing, it is covered with highly vascular skin called velvet, which supplies oxygen and nutrients to the growing bone.[6] Antlers are considered one of the most exaggerated cases of male secondary sexual traits in the animal kingdom,[7] and grow faster than any other mammal bones.[8] Growth occurs at the tip, and is initially cartilage, which is mineralized to become bone. Once the antler has achieved its full size, the velvet is lost and the antler's bone dies. This dead bone structure is the mature antler. In most cases, the bone at the base is destroyed by osteoclasts and the antlers fall off at some point.[6] As a result of their fast growth rate, antlers are considered a handicap since there is an incredible nutritional demand on deer to re-grow antlers annually, and thus can be honest signals of metabolic efficiency and food gathering capability.[9]

In most arctic and temperate-zone species, antler growth and shedding is seasonal and controlled by the length of daylight. In tropical species, antlers may be shed at any time of year, and in some species such as the sambar, antlers last several years. Some equatorial deer never shed their antlers.[6]

Antlers function as weapons in combats between males, which sometimes cause serious wounds, and as dominance and sexual displays.[8]

The ancestors of deer had tusks (long upper canine teeth). Antlers appear to replace tusks; two modern species, the musk deer and the water deer, have tusks and no antlers, the muntjac has small tusks and small antlers, and other deer have full-sized antlers and no tusks.[6] The diversification of antlers, body size and tusks has been strongly influenced by changes in habitat and behavior (fighting and mating).[10]

Caribou and reindeer use their antlers to clear away snow so they can eat the vegetation underneath. This is one possible reason that females of this species evolved antlers.[6] Another possible reason is for female competition during winter foraging.[10]

In moose, antlers appear to act as large hearing aids. Moose with antlers have far more sensitive hearing than moose without, and a study of trophy antlers with an artificial ear confirmed that the antler behaves like a parabolic reflector.[11]

The principle means of evolution of antlers is sexual selection, which operates via two mechanisms: Male-male competition (behaviorally, physiologically) and female mate choice.[7] Male-male competition can take place in two forms. First, they can compete behaviorally where males use their antlers as weapons to compete for access to mates; second, they can compete physiologically where males present their antlers to display their strength and fertility competitiveness to compete for access to mates.[7] Males with the largest antlers are more likely to obtain mates and achieve the highest fertilization success due to their competitiveness, dominance and high phenotypic quality.[7] Whether this is a result of male-male fighting or display, or of female choosiness differs depending on the species as the shape, size, and function of antlers vary between species.[10]

There is evidence to support that antler size influences mate selection in the red deer, and has a heritable component. Despite this, a 30 year study showed no shift in the median size of antlers in a population of red deer.[12] The lack of response could be explained by environmental covariance, meaning that lifetime breeding success is determined by an unmeasured trait which is phenotypically correlated with antler size but for which there is no genetic correlation of antler growth.[12] Alternatively, the lack of response could be explained by the relationship between heterozygosity and antler size, which states that males heterozygous at multiple loci, including MHC loci, have larger antlers.[13] The evolutionary response of traits that depend on heterozygosity is slower than traits that are dependent on additive genetic components and thus the evolutionary change is slower than expected.[13] A third possibility is that the costs of having larger antlers (resource use, and mobility detriments, for instance) exert enough selective pressure to offset the benefit of attracting mates; thereby stabilizing antler size in the population.

Antlered heads are prized as trophies—the bigger, the better. The first organization to keep records of sizes was Rowland Ward Ltd., a London taxidermy firm, in the early 20th century. For a time only total length or spread was recorded. In the middle of the century, the Boone and Crockett Club and the Safari Club International developed complex scoring systems based on various dimensions and the number of tines or points, and they keep extensive records of high-scoring antlers.[14]

Gathering shed antlers or "sheds" attracts dedicated practitioners who refer to it colloquially as shed hunting, bone picking or sometimes clinting (a term that originated in Cascade, Idaho, but is now more widely used). In the United States, the middle of December to the middle of February is considered shed hunting season, when deer, elk, and moose begin to shed. Heavy snowfall during this time can make clinting very difficult. In Canada shed hunting usually occurs after the snow melts. Sheds often accumulate in one area, and these areas are often kept secret by those who hunt there.[citation needed]

Shed antlers have been used by craftspeople since ancient times to make tools, weapons, ornaments, and toys.[15] They are worn in traditional dances such as Yaqui deer dances and carried in the Abbots Bromley Horn Dance.

In the velvet stage, antlers of elk and deer have been used in Asia as a dietary supplement or alternative medicinal substance for more than 2,000 years.[16]

In prehistoric times a large shed deer antler from a suitable species (e.g. red deer) was often cut down to its shaft and its lowest tine and used as a one-pointed pickax. [1] [2]