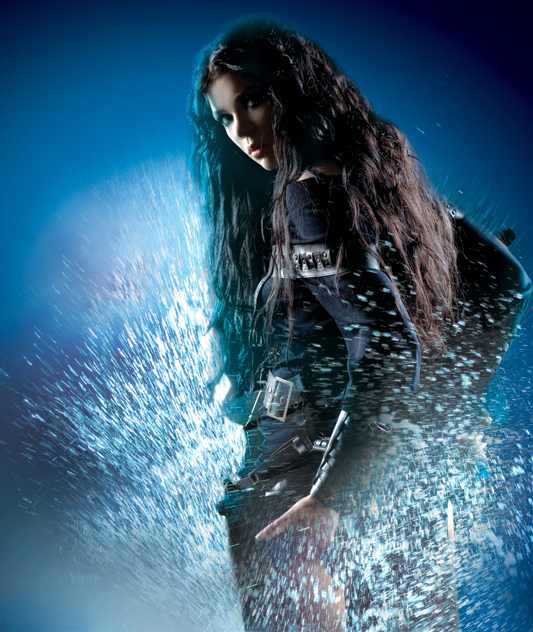 She is a singer, dancer, producer, composer, conductor, and pianist. She writes, composes and produces her own songs and music videos. Since 28 December 1995 she is married to , a Ukrainian record producer. Together they are running the company "Luxen Studio" since 1993, where radio and film trailers are produced.

She won the with the song "", which earned 280 points, receiving points from 34 of the 35 other countries participating in the contest (the exception being ).

Ruslana was born on in , (now Ukraine) to Ukrainian parents Nina and Stepan Lyzhichko. She was raised in (province). Encouraged by her mother Ruslana studied from the age of four at an experimental musical school and sang in different bands, including in the vocal-instrumental band Horizon, the band Orion and the children’s ensemble Smile. After a ten-year secondary school with mathematical bias, Ruslana entered the music Conservatory in L'viv where she graduated as pianist and orchestra conductor in 1995.She has a half-sister named Anna.

Ruslana started her career as a winner of Slavyanskiy Bazar song competition in Vitebsk, in with the song "Oj, letili dyki husi". In the same year she was amongst the nomination for "The Singer of the year 1996" of the First All-Ukrainian National Show "The Person of the Year" and the video for "Dzvinkyi Viter" (Wind Bells) was awarded "Best video of the year" at the television festival "The Golden Era".

In 1997, Ruslana began working on "Christmas with Ruslana" - the first Christmas television project of an All-Ukrainian scale including the video clip "Ballad of a Princess" which was the first animated in .

Her first album "" ("A Moment of Spring – Wind Bells"), released in 1998, received high praise from the critics.

In she worked on the Christmas musical "Ostanne rizdvo 90th" (The Last Christmas of the 90's), which won the Ukrainian "Movie of the Year" award. With the video clip to the song "Znaju Ja"(I Know) which is about the ancient people of the Hutsuls living in the , Ruslana set new standards for modern video clip filming.

Ruslana's father is from the West-Ukrainian area of the , the dwellers of the Ukrainian Carpathian Mountains. They have a unique culture with an ancient and rich history which inspired Ruslana to create her song and album "Wild Dances". The Wild Dances style combines powerful and permeating ethnic drums, trumpet sounds of the , an ancient music instrument with modern dance beats.

The album "Dyki Tantsi" ("Wild Dances") was released in June 2003 in . It was the first album ever to get 5 times platinum in Ukraine, selling over 500,000 copies. The English version of the album "Dyki Tantsi" was released in Europe in autumn 2004: "Wild Dances - Welcome to my wild world". The song "Wild Dances" brought Ruslana the victory at the and entered dozens of European music charts. She also achieved golden records in Sweden, Russia, Greece, Czech Republic and Slowakia.

Ruslana was chosen by , using an internal selection, to represent at the . Before the contest she was a hot favorite for victory by the bookmakers. At the she performed her self-composed song, "" and won the contest receiving 280 points (the highest amount of points received by a winner of the from the first 50 editions of the contest). Also, she received points from every country in the semi final and from every country except in the final. "Wild Dances" was number one in for 10 consecutive weeks, and .

Ruslana opened the with the song "". At the interval act she performed "" which became a hit as soon as it was released, entering most of the music charts all around . The song "" was released on her 2008 album "Wild Energy.

Ruslana's song "" was named the by the . On the television program "Grand Prix Hitliste", was presented as the winner, ahead of famous songs, such as Waterloo and Germany's only winner, , which finished sixth and twelfth, respectively. The program was viewed by a television audience of approximately six million people in Germany.

Ruslana was a guest performer at the national final of Azerbaijan with her "Wild Energy" show. Azerbaijan made its debut in the .

Ruslana's new project Wild Energy is based on the science fiction novel by Maryna and Sergij Diachenko "". In a future which experiences a global energy crisis, far more threatening than lack of and , people are lacking their will for life, their energy of the heart - the "fuel for people". Lana, one of the synthetic inhabitants, sets out to find the mystical energy source. After many adventures she discovers that the wild energy comes from her own heart.
combines the art of music and video production, literature and social commitment in an extraordinary way. In June 2006 Ruslana presented the new single and video in a unique fantasy style. In this video clip the singer develops from a synthetic blonde girl into her wild image. Within the frames of the Ruslana went on tour in to support the . She performed in , , , , and .

In , Ruslana hosts Vladivostok FM. Her song is featured as one of the songs on Vladivostok.

In March 2008 Ruslana's Ukrainian album was released in Ukraine, Czech Republic and Slovakia. The English album was released in Canada on 2 September 2008 and will be released in several European countries and China on 10 October 2008. The album was recorded at the Studio in and contains two collaborations with American Urban superstars and . [ [http://blog.ruslana.ua/?p=377&language=en Ruslana to release Wild Energy] ] On this release Ruslana creates her own distinctive technique of incorporating ancient ethnic styles of the people with modern popular music.

In autumn 2004 Ruslana actively supported the democratic processes in Ukraine known as the . She declared her support for during the disputed Ukrainian presidential elections. She became one of the prominent figures that addressed the mass crowds rallying in support of Yushchenko's demand that his original defeat be declared fraudulent. From spring 2006 to summer 2007 she was a Member of the Ukrainian Parliament for the party Our Ukraine. [ [http://www.ruslana.com.ua/text/arch/eng/arch2007summer.html Ruslana resigns as Member of Parliament] ]

Ruslana was appointed Good Will Ambassador of Ukraine by the and combats . She released two video clips which aim to make potential victims aware of the dangers of . In February 2008 Ruslana performed at an anti-human trafficking event in , , organized by (The United Nations Global Initiative to Fight Human Trafficking) in front of 117 international delegations. Her song "Not For Sale" became the anthem of the anti-trafficking campaign [ [http://blog.ruslana.ua/?language=en Ruslana Blog] ] .

Within the frames of the in she gave a charity concert for children suffering from the consequences of the tragedy. For another charity project Ruslana joined forces with German rock star [ [http://www.maffay.de/begegnungen/ Website of Peter Maffay] ] . In April/May 2007 they went together with artists from 14 countries on a four weeks tour through Germany. The funds gathered benefited children in need.

With her project Wild Energy Ruslana supports the use of . She regards the energy of the sun, the water and the wind as an energy independence. The project gradually developed into this bigger meaning. Ruslana wants to make people aware of the dangers of . [ [http://www.npr.org/templates/story/story.php?storyId=89436819 A Ukrainian Pop Star's Would-Be Revolution] ]

After large regions in Western Ukraine were hit by a flood in July 2008 Ruslana set up the co-ordinating and relief centre "Carpathians. Flood. SOS! 2008". The aim of the centre is to create a database of the people in need, to provide emergency humanitarian help and to collect and distribute donations both from the public and from other Ukrainian artists and sportsmen to support the victims of the flood. [ [http://karpatysos.info/en/ Carpathians. Flood. SOS!] ] .

For some time Ruslana has been the face of Garnier in Ukraine. In the spring of last year L’Oreal Cosmetics offered Ruslana an endorsement contract where she will become a new face of L’Oreal.