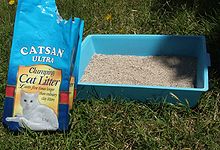 A basic litter box and a bag of litter.

A litter box, sometimes called a sandbox, sand box, litter tray, litter pan, dirt box, catbox, or cat box, is an indoor feces and urine disposal box for cats (as well as rabbits and other pets that naturally or through training will make use of such a repository) that are permitted free roam of a home but who cannot or do not always go outside to relieve themselves. Many owners of these animals prefer not to let them roam outside for fear that they might succumb to the elements or get hit by a car, so a cat litter box makes it possible to shelter pets from these risks.

In the wild, cats naturally excrete in soft or sandy soil for easy burial. To simulate this instinctive desire, a litter box's bottom is filled typically with an inch (2.5 cm) or more of cat litter. Litter box filler is a loose, granular material that absorbs moisture and odors such as ammonia. Some litter brands contain baking soda, to absorb such odors. The litter material also satisfies a cat's instinctive desire to use an easily-dug material. The most common material is clay, although recycled paper "pellets" and silicon based "crystal" variants are also used.

One of the first commercially available cat litters was Kitty Litter, available in 1948 and marketed by Ed Lowe. This was the first large scale use of clay (in the form of Fuller's earth) in litter boxes; previously sand was used. Clay litter is much more absorbent than sand, and its larger grain makes it less likely to be tracked from the litter box. The brand name Kitty Litter has become a genericized trademark,[where?] used by many to denote any type of cat litter. Today, cat litter can be obtained quite economically at a variety of retail stores, including "dollar" retail outlets. Conventional clay litter is indistinguishable from clay-based oil absorbent (used to clean oil spills); as the latter is far less expensive, it is often used as a substitute. Non-clumping cat litter is often made of zeolite, diatomite and sepiolite.

The cat-box that the litter is poured into can give off a bad odor. It is recommended that it is kept in an area in the home that is not used often, such as a basement or laundry room. There are special types of litter to cover or lessen the odor. They contain baking soda and odorized crystals. If kept in room with an intake vent, an air freshener may be added on the furnace filter to isolate the odor from the rest of the house. 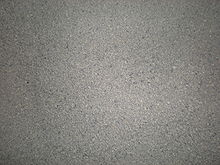 Close up of cat litter

Litter clumps were first developed in the UK in the 1950s by the Fuller's Earth Union (FEU), later to become a part of Laporte Industries Ltd. The type of clumping litter developed by the FEU was calcium bentonite, a less swelling and less sticky type than American bentonite. Subsequently in America, clumping bentonite was developed in 1984 by biochemist Thomas Nelson. Most are made from granulated bentonite clay which clumps together when wet and forms a solid mass separate from the other litter in the box. This solid clumped material can be scooped out and disposed of without changing the entire contents of the litter box.

Approximately 69% of the cat litter market consists of clumping litter.[citation needed] Clumping litter usually also contains quartz or diatomaceous earth (sometimes called diatomaceous silica, which causes it to be mistakenly confused with silica gel litter). Because of the clumping effect, the manufacturers usually instruct not to flush clumping litters down the toilet, because it could clog it.[1]

Clumping clay cat litters also contain crystalline silica, or silica dust, which in California is treated as a known carcinogen under Proposition 65.[2] It has been proven not to be of significant risk to humans,[citation needed] but there are no studies to show (nor regulations governing) the effect of silica dust on cats. Clay litter is also criticized by the more expensive manufacturers of non-clay litter as being commonly produced in a strip mine in an environmentally degrading process.[3]

Each year, over 2 million tons of cat litter, or approximately 100,000 truckloads, ends up in landfills in the U.S. alone. Primarily this is not biodegradable or renewable and adds unnecessarily to the waste burden.[4] Some pet owners prefer biodegradable litters due to its friendliness to the environment. Biodegradable cat litter can also be eliminated completely by safely composting the used litter at home. Other cat owners can be attracted to the biodegradable litters because of their flushability or deodorizing properties.[5] The natural litters are non-carcinogenic. Asthmatic cats may sometimes benefit from the reduced dust in some forms of biodegradable litter.

Biodegradable litter packaged specifically for cats tends to be more expensive than traditional clay litters, so cost is often not a positive factor in their selection. But most biodegradable litters last longer than the equivalent size of clay or clumping clay litters.[citation needed] Grain-based animal or poultry feed also provides an economical alternative to products marketed specifically as cat litter.[citation needed] Also, most of these forms of litter are recycled from human usage and are thus reusing a waste product as opposed to drawing clay from mines.

A cat using a silica filled litter box. Notice the raised sides of the box which reduces spillage of litter.

Silica gel litter, often referred to as "crystal litter", is a porous granular form of sodium silicate, has the highest absorbency of any litter, and has excellent moisture control and complete odor elimination for an extended period of time compared to other litters.

Some praise its absorbency because 4–5 lb (2 kg) can absorb liquid and odor for up to 30 days for one healthy normal weight cat. It is important to lightly stir the crystals daily while scooping the solid waste, otherwise urine can pool in the box. When crystal litter is saturated, at the end of 30 days or so, it begins to smell and is visibly saturated. In comparison, over the same time period it may take 20–30 lb (9–14 kg)[citation needed] or more of clay or clumping litter, because it is necessary to replenish the litter that is removed when the clumped urine is scooped out. No replenishing is necessary with silica gel (crystal) litter.

Others have claimed that this litter gives them no warning when it is saturated and their cat left a urine puddle at the bottom of the pan, but as mentioned above, this litter will eventually begin to smell when the crystals can no longer hold any more urine. Also, as the crystals absorb the urine, odorlessly, they turn from white to slightly yellow. This is when a crystal is 'visibly saturated'. It is easy to determine when this litter needs changing because you can either smell urine (the crystals are over saturated) or you can no longer see any white crystals. 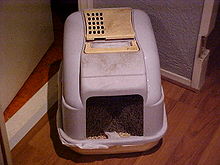 Originally made of wood, the cat box today is typically a plastic tray with outwardly-sloped sides 10 to 15 centimetres (4 to 6 in) high. More elaborate models are covered, looking similar to pet carrying cages with open doorways, providing some allegedly-desired privacy to the pet, as well as keeping the litter out of sight. To facilitate emptying and cleaning a litter box, plastic liners may be used. Some have a handle so they can be moved easily.

There are developments in litter box technology to simplify the litter box emptying procedure. Some models have electric combing mechanisms that automatically scoop the clumps out of the litter box into a sealed, disposable-bag-lined container after the animal has used it. These models use a pressure pad or an infrared light to determine when the cat has left the box and will comb the box after so many minutes have passed, to avoid disturbing the cat. Other designs take this further, and connect directly to a home's plumbing (faucet connection and drain) so they can wash, rinse and dry the permanent litter pellets automatically.

Simpler designs exist, for example, some require the owner to manually shake the clumps into an easy-to-remove tray, designed very clean. Another variant has an enclosed sphere which rotates as it sifts out the clumps and deposits them in a drawer below the sphere. A new method involves incorporating sifting functionality within a sifting litter liner. 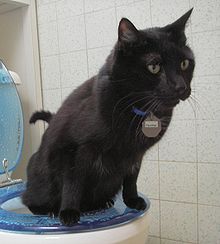