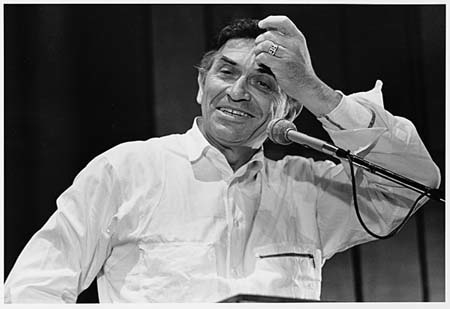 Graham was born Wolfgang Grajonca in , the youngest son of a lower-middle-class ish family that had emigrated from prior to the rise of . [ [http://www.highbeam.com/doc/1P2-1028677.html On the Beat; Bill Graham, Lead Act at Last | Article from The Washington Post | HighBeam Research ] ] [http://nl.newsbank.com/nl-search/we/Archives?p_product=SB&p_theme=sb&p_action=search&p_maxdocs=200&p_topdoc=1&p_text_direct-0=0EB0D9644100A6BC&p_field_direct-0=document_id&p_perpage=10&p_sort=YMD_date:D&s_trackval=GooglePM] Graham's father died two days after Graham's birth. [ [http://query.nytimes.com/gst/fullpage.html?res=9D0CE5D61131F934A15753C1A967958260 Bill Graham, Rock Impresario, Dies at 60 in Crash - New York Times ] ] Graham's mother placed Graham and his younger sister in an orphanage in , as it became increasingly difficult for Jews to survive in Nazi . This turned out to be fortunate, as the orphanage sent them to in a pre&ndash; exchange of Jewish children for orphans.

Graham's older sisters stayed behind with his mother. After the fall of , Graham was among a group of Jewish orphans spirited out of France. A majority of the children &ndash; including Graham's younger sister Tolla &mdash;did not survive the journey.

Graham's mother was killed in . Graham had five sisters, Rita, Evelyn, Sonja, Ester and Tolla (Tanya). His sister Ester survived Auschwitz. She later moved to the and was very close to Graham in his later life. His sister Rita escaped by working as a dancer, first to and then, after the war, to the .

Once in the , Graham stayed in a foster home in The Bronx in . After being taunted as an immigrant and being called a Nazi because of his German accented English, Graham changed his name ("Graham" was found in the phonebook, it was closest to his real surname "Grajonca." According to Graham, both "Bill" and "Graham" were meaningless to him) and worked to perfect a New York accent. Graham graduated from and then went to business school. He was later quoted as describing his training as that of an "."

Graham was drafted into the in 1951, although he officially still wasn't a U.S. CitizenFact|date=July 2008, and served in the , where he was awarded both the Bronze Star and . Upon his return to the States he worked as a waiter/ in the Catskill Mountain resorts in upstate during their heyday. He was later quoted as saying his experience as a maître d' and with the games he hosted behind the scenes was good training for his eventual career as a promoter. , who played some of these resorts, went on record once saying that Graham was avid to learn Spanish from him, but only cared about the curse words.

Graham moved from to in the early 1960s to be closer to his sister, Rita. He was invited to attend a free concert in , where he made contact with the , a radical theater group. He gave up a promising business career to manage the troupe in 1965. After Mime Troupe leader Ronny Davis was arrested on obscenity charges during an outdoor performance, Graham organized a benefit concert to cover the troupe's legal fees. The concert was a success, and Graham saw a business opportunity. He began promoting more concerts to raise funds for the Mime Troupe, and eventually left the troupe to promote concerts full time.

One of the first concerts Graham promoted was in partnership with of the Family Dog organization and featured the Paul Butterfield Blues Band. The concert was an overwhelming success and Graham saw an opportunity with the band. Early the next morning, Graham called the band's manager, Albert Grossman, and obtained exclusive rights to promote them. Shortly thereafter, arrived at Graham's office, asking how Graham could have cut him out of the deal. Graham pointed out that Helms would not have known about it unless he had tried to do the same thing to Graham and advised him to "get up early" in the future.

A charismatic but often difficult personality, Graham's shows attracted elements of America's now legendary of the time such as , , , , , , , and, a particular favorite of Graham's, . His successes and popularity allowed him to become the top concert promoter in . He operated the famous venues the and (both in ) and the (in ), where the best up-and-coming acts would come to play. Also in New York City, he formed a booking agency called "The Millard Agency" which organized the booking of bands into various venues across the US. Because his music venue was the Fillmore, it seemed obvious to call the booking agency Millard. was the thirteenth president of the . In his music venues, he also opened certain weekday nights for unknown bands, like Santana, to get exposure. Graham promoted the West-Coast leg of the legendary , also known as (for Stones Touring Party), as well as parts of the 1975 and 1978 tours. He would then promote the entire and . When the Stones returned to touring in 1989 with the tour, took the offer of 's (Ballard Cohl Labatt). Cohl made his reputation (and his fortune) in 1989 by buying the concert, sponsorship, merchandising, radio, television, and film rights to The Rolling Stones' Steel Wheels Tour. The tour became the most financially successful in history. Graham later discovered that Cohl had only offered slightly more money, and Graham took Jagger's repudiation as a personal defeat, writing "Losing the Stones was like watching my favourite lover become a whore."

In the 1970s, he closed the s on both coasts, citing a need to "find himself." He retreated to a Greek island, but found the quietude disconcerting and later admitted being disappointed that no one there knew who he was.

He returned to promoting, first organizing concerts at smaller venues, like the on the campus of . He then leased out the Arena in and promoted shows at the Auditorium in . His first large-scale outdoor arena concert was a benefit for the San Francisco after-school programs, called the concert and starred , with and members of . He was careful to make sure everything ran smoothly at his events, fearing the unpredictable nature of large crowds, and became known for his explosive response to anyone deviating from procedure.

In the mid-1980s, in conjunction with the city of , and cofounder , he masterminded the creation of the , which became the 's major venue for outdoor rock concerts.Fact|date=February 2007

Throughout his career, Graham promoted benefit concerts to raise money for causes he supported. During the 1980s, as his organization grew, Graham left more of the everyday details of his business to employees and focused his personal energies on promoting benefit concerts.

He would go on to set the standard for well-produced large-scale s, such as the American portion of in , on July 13, 1985, as well as the 1986 A Conspiracy of Hope and 1988 Human Rights Now! tours for . In addition, he presented regular concerts in Bay Area stadiums, referred to as "," and was known to aggressively challenge potential competition, referring to other promoters by the name "Joe Schlitz." He was often seen pounding his fist into his open hand and announcing that "Joe Schlitz will not come into this town."

Graham's monopoly business practices went as far as strong-arm contracts with the University of California Regents to control on-campus entertainment venuesFact|date=July 2008, thus preventing ASUC and other student organizations from promoting their own rock concerts in the 1980s. In the '80s he teamed up with BASS Tickets to drive small ticket-distribution companies out of business in the Bay Area, creating a de facto monopoly.Fact|date=July 2008 After the smaller operations failed, the remaining one, Ticketmaster (formerly BASS), raised prices to unprecedented levels. Its only opposition came from a few bands, notably , who protested that the company's high ticketing fees were unfair to music fans. Such practices were targeted by the California Senate in S.B 815. [http://info.sen.ca.gov/pub/93-94/bill/sen/sb_0801-0850/sb_815_cfa_930429_142654_sen_comm]

For all his competitive nature and fiery disposition, Graham was recognized as an expert promoter who genuinely cared about both the artists and the attendees at his concerts. He was the first to ensure that medical personnel were on site for large shows and was both a contributor and supporter of the Free Clinic, which he often used as medical support at events. He also loved putting together groups onstage from different ethnic backgrounds&mdash;many of whom were ignored by other promoters&mdash;and he had an eye for pleasing his audience, while making an effort to educate them in styles of music they would otherwise not have been exposed to.

In management, Graham is credited with the early careers of groups like Santana, and Paul Collins' Beat. He was also responsible for promoting the careers of virtually every other group that played the concert circuit between 1965 and 1991.Fact|date=July 2008

Graham's status as a Holocaust survivor came into play in the mid-1980s, during the presidency of . When Graham learned that Reagan intended to lay a wreath at the Cemetery in , where Officers were buried, he organized protests against the act. During the same month that Reagan visited the cemetery, Graham's office was firebombed by s. Graham, in France at the time, meeting with to organize the first concert, was informed of the fire via telephone. He responded as follows: "Was anybody hurt?" It was only after he was told that everyone was okay, he asked, "Is anything left?"

Graham also was instrumental in commissioning and marketing concert posters by designers including , , and . These posters are now considered collector's items.

Graham had a lifelong dream to become a , professing a great admiration for . He appeared in 's "," as a promoter. In 1990, director and actor provided an opportunity for Graham to take a more substantive role by casting him as Charles "Lucky" Luciano in the film "." During one scene, Graham is shown in a Latin dance number, a style of dancing Graham had embraced as a teenager in New York. He also appears as a promoter in the 1991 Oliver Stone film "The Doors."

Bill Sagan (Former CEO of EBP) of Minnetonka, Minnesota, bought the Bill Graham Presents archives and has organized hundreds of millions of dollars' worth of merchandise and video/audio recordings of concerts collected by Graham. Sagan is now selling some of the collection at referring to Graham's birth name. Sagan is now being sued for alleged rights infringement.

Graham was killed in a crash near in 1991, while returning home from a concert at the .

Once he had obtained the commitment from the News to perform, he returned to his helicopter, which crashed shortly after take-off, just 20 miles from the concert site.

Flying in weather reported as low overcast, rain and gusty winds, the aircraft flew directly into a 223-foot high-voltage tower along Hwy 37, which runs between and .

Graham was married at one time to San Francisco artist Bonnie Lipshitz McLean who is the mother of his son David. Bonnie was the first bookkeeper at the Fillmore and designed some of the posters for concerts Bill promoted. He would occasionally introduce Bonnie from the stage as "the world's greatest broad." He also had several long-term relationships. He was survived by his sisters and two sons, and Alex Graham, as well as his stepson, Thomas Sult.

Following his death, his company, , was taken over by a group of employees. Graham's sons remained a core part of the new management team. The new owners sold the company to SFX Promotions, which in turn sold the company to . The BGP staff did not embrace the Clear Channel name, and several members of the Graham staff eventually left the company, including former President/CEO Gregg Perloff and former Senior Vice President Sherry Wasserman, who started their own company, Another Planet Entertainment. Eventually Clear Channel separated itself from concert promotion and formed , which is managed by senior Clear Channel management. is now the world's largest concert production/promotion company.

In tribute, the was renamed the Bill Graham Civic Auditorium. On , a free concert called was held at to honour Graham, Gold and Kahn.