Derazhnia (Ukrainian: Деражня; Polish: Dzierażnia; also Derazhnya) is a city and railway station in the Khmelnytskyi Oblast (province) of western Ukraine. Derazhnia is situated along the banks of the Vovk River (meaning wolf in Ukrainian), 42 km east from the regional center Khmelnytskyi. An important railway junction on the line Lviv-Khmelnytskyi-Zhmerynka. Derazhnia has 10,500 inhabitants (2001 census). Derazhnia is the administrative center of Derazhnianskyi Raion. Postal code for Derazhnia is 32200. In terms of religious affiliation, local Ukrainian inhabitants belong mainly to the Ukrainian Orthodox Church[disambiguation needed

]. Derazhnia Milk Plant is one of key enterprises in the city. Local Sugar Factory was 5th largest in Ukraine, defunct from the late 1990s - early 21st century. There are also chemical and brickworks industries.

Derazhnia was founded in 1431. Turkish records from 1542-3 report that the town site had a small Cossack detachment consisting of no more than a few huts. In 1552 there were only eleven persons living in Derazhnia, four of whom later died in an epidemic. Tatars attacked the town in 1567. Derazhnia was attacked by Bogdan Khmelnitsky's cossacks in 1648. Derazhnia was occupied by Turkey in 1672, becoming part of the Turkish Ejalet of Kamieniecki. In 1682, Derazhnia was recaptured by the Poles under Jan Sobiesky. A small castle was built here that lasted into the early 20th century but is now destroyed.

Well-preserved Jewish cemetery in Derazhnia. It contains burials from at least the 1700s. 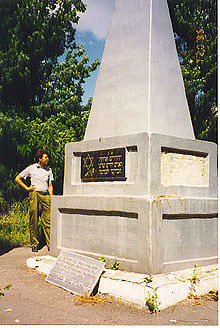 Monument located at the mass shooting site of Derazhnia. It contains the graves of about 4,000 Jews and Romas.

The first Jews in Derazhnia are reported in stories within Shivhei haBesht (stories about the Baal Shem Tov) that probably date from about 1750. The well-preserved Jewish Cemetery has burials from at least the late 18th century and maybe earlier. Derazhnia passed into Russian hands during the second partition of Poland in 1792. Starting in the 1840s, special Jewish agricultural colonies were granted close to Derazhnia. The largest and most prosperous was Staro Zakrevsky Meidan, founded 1844. It continued until it was turned into a kolkhoz Staro Meidan by the Soviets in 1928.

Historically, Derazhnia was a tiny, impoverished village in the middle of nowhere until the Southern-Western Railroad was built in 1871-1876. Due to the railroad, the population of Derazhnia swelled from 1,201 people in 1873 to 6,118 people in 1897 and of this 5,230 were the Jews.

The large crowded halls of the Derazhnia train station served as a kind of international marketplace and clubhouse. It became possible for local merchants to interact with banking figures and merchants from all over Europe. The economy of Derazhnia thrived. Ukrainian Jewish writer Sholom Aleichem wrote the fictional humorous short story "The German" taking place in Derazhnia. The train station figures prominently in the story.

During World War I the railroad served a different purpose. The train station and embankments were fortified and military supply trains passed through every 10 to 15 minutes. The train station served as a vector of communications and news. After the 1917 Bolshevik Revolution, Derazhnia saw numerous pogroms, due both to the communications and the strategic importance of the rail station.

Under Soviet rule starting 1922, the region's economy improved. Electricity, schools, roads and other infrastructure were built. Several kolkhozi (collective farms) were established nearby. In the early 1930s, pressure from the government to collectivize and the needs of private peasants resulted in severe food shortages that resulted in famines throughout Ukraine.

In World War II, Derazhnia fell to Nazi forces during Operation Barbarossa on July 11, 1941 after heavy fighting. It remained in Nazi hands until it was liberated by Soviet troops on March 25, 1944. The rail station was fortified by the Nazis while the railway was used to help supply the front. Jews from Derazhnia and nearby towns were concentrated into Derazhnia Ghetto. Included were about 200 Roma (Gypsies) from nearby Volkovintsi. On September 20, 1942, about 4,000 people were shot - the entire Jewish community perished.

During the Cold War, Derazhnia was the location of a secret nuclear missile base.