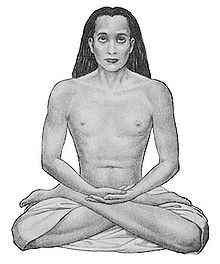 Mahavatar Babaji - a drawing from Autobiography of a Yogi, commissioned by Yogananda and based on his own meeting with Babaji

Mahavatar Babaji’s given name and date of birth are not known, so those who met him during that period all called him by the title first given to him by Lahiri Mahasaya.[2][6] "Mahavatar" means "great avatar", and "Babaji" simply means "revered father". Some of the encounters included two or more witnesses—discussions between those who met Mahavatar Babaji indicate that they all met the same person.[2][4][5]

The first reported encounter with Mahavatar Babaji was in 1861, when Lahiri Mahasaya was posted to Ranikhet in his work as an accountant for the British government. One day while walking in the hills of Dunagiri above Ranikhet, he heard a voice calling his name. Following the voice up the mountain, he met a "tall, divinely radiant sadhu."[6] He was amazed to find that the sadhu knew his name.[2][6] This sadhu was Mahavatar Babaji.

Lahiri Mahasaya reported that Mahavatar Babaji did not give his name or background, so Lahiri gave him the title "Mahavatar Babaji." Many sadhus in India are called Babaji, and sometimes even "Babaji Maharaj", which has caused confusion between Mahavatar Babaji and other sadhus with similar names.[6]

Several disciples of Lahiri Mahasaya also said they met Babaji. Through discussion with each other, and the fact that some of these encounters included two or more witnesses, they confirmed that the person they saw was the same sadhu that Lahiri called Mahavatar Babaji.[2][6][8]

Swami Keshabananda, a disciple of Lahiri Mahasaya, tells of meeting Mahavatar Babaji in the mountains near Badrinath around 1935, after he became lost wandering in the mountains.[2] At that meeting, Pranabananda reported that Babaji gave him a message for Yogananda, that "I won't see him this time, as he is eagerly hoping; but I shall see him on some other occasion."[2]

Legendary powers and age have been attributed to Mahavatar Babaji by the disciples of Lahiri Mahasaya. These stories have led many to believe that Mahavatar Babaji is a legendary person, rather than a real sadhu that was seen by numerous witnesses from 1861 to 1935. 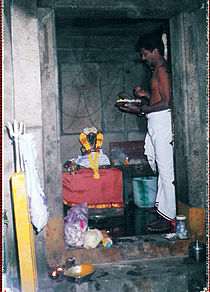 Puja is being conducted to the idol of Babaji Mahavatar

The Mahavatar is in constant communion with Christ; together they send out vibrations of redemption, and have planned the spiritual technique of salvation for this age. The work of these two fully-illumined masters–one with the body, and one without it–is to inspire the nations to forsake suicidal wars, race hatreds, religious sectarianism, and the boomerang-evils of materialism. Babaji is well aware of the trend of modern times, especially of the influence and complexities of Western civilization, and realizes the necessity of spreading the self-liberations of yoga equally in the West and in the East.

In addition, Babaji is reputed to be ageless, according to some accounts, and about 500 years old around the late 1800's, according to Swami Pranabananda.[4] Yogananda reports that, according to the disciples of Lahiri Mahasaya, nobody knows Babaji’s age, family, place of birth, true name, or other details “dear to the annalist’s heart.”[2]

According to Yogananda's Autobiography, he has a sister called Mataji (meaning "Holy Mother") who also has lived throughout the centuries. Her level of spiritual attainment is comparable to her brother's, and she lives in a state of spiritual ecstasy in an underground cave. Although only three pages in the book are dedicated to her, she is described by Ram Gopal as "young and surpassingly lovely" as well as a "glorious woman."

Babaji and the 18 Siddha Kriya Yoga Tradition by M. Govindan, claims to build upon the story of Mahavatar Babaji by giving details of his life. According to Govindan, Babaji was named Nagaraj (king of serpents) by his parents. He was born on the 30th day of November 203 A.D., in a small coastal village now known as Parangipettai, in Tamil Nadu, India. This information was given by Babaji Nagaraj in 1953 to two disciples, yogi S.A.A. Ramaiah and V.T. Neelakantan.[13][14]

Between 1861 and 1924, Hariakhan Baba, a Hindu Saint who taught throughout northern India near the Himalayas, was identified as Mahavatar Babaji by Mahendra Baba.[citation needed]

An overview of the Babaji phenomenon was presented by journalist Carter Phipps in WIE Magazine.[15]

In Book 3 of Conversations with God, by Neale Donald Walsch, it is suggested that Babaji may at one time have resurrected himself from the dead.[16]

The 2002 Tamil film Baba written by Rajinikanth was based on Babaji. Paramhansa Swami Maheshwarananda writes in his book The hidden power in humans, that the Guru of the legendary Babaji is Sri Alakh Puriji.[17]