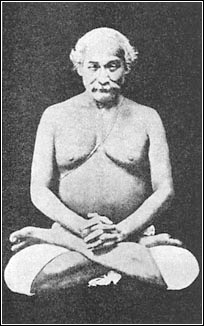 Shyama Charan Lahiri (Bengali: শ্যাম চরণ লাহিড়ী "Shêm Chôron Lahiṛi"), best known as Lahiri Mahasaya (, - , ), was an Indian yogi and a disciple of . He revived the yogic science of when he learned it from in 1861. Lahiri Mahasaya was also the of . "Mahasaya" is a word meaning 'great soul'.

He was unusual among Indian holy men in that he was a &mdash; marrying, raising a family, and working as an accountant for the Military Engineering Department of the English government. Lahiri lived with his family in rather than in a temple or monastery. He achieved a substantial reputation among 19th century religionists.

He became well known in the west through , a disciple of Sri Yukteswar Giri, and through Yogananda's "". Yogananda wrote that Lahiri was chosen by Mahavatar Babaji to reintroduce the lost practice of Kriya Yoga to the world. Lahiri's disciples included both of Yogananda's parents as well as Yogananda's own guru. Lahiri Mahasaya prophesied that the infant Yogananda would become a yogi, and "carry many souls to God’s kingdom".

Lahiri was born into a Brahmin family in the Nadia district of Bengal. He was the youngest son of Muktakashi, wife of Gaur Mohan Lahiri. His mother died when he was a child &mdash; there is very little known about her, except that she was a devotee of Lord Shiva. At the age of three or four, he was often seen sitting in meditation, with his body buried in the sand up to his neck. When Lahiri was five, the family's ancestral home was lost in a flood, so the family moved to , where he would spend most of his life.

As a child, he studied Urdu and Hindi, gradually moving on to Bengali, Sanskrit, Persian, and English at the Government Sanskrit College, along with study of the Vedas. Reciting the Vedas, bathing in the Ganges, and worship were part of his daily routine.

In 1846, he was married to Srimati Kashi Moni. They had two sons, Tincouri and Ducouri, and two daughters. His work as an accountant in the Military Engineering Department of the English government took him all over India. After the death of his father, he took on the role of supporting the entire family in Varanasi.

, in the foothills of the Himalayas. One day, while walking in the hills, he heard a voice calling to him. After climbing further, he met his Guru Mahavatar Babaji, who initiated him into the techniques of Kriya Yoga. Babaji told Lahiri that the rest of his life was to be given to spreading the Kriya message.

Soon after, Lahiri returned to Varanasi, where he began initiating sincere seekers into the path of Kriya Yoga. Over time, more and more people flocked to receive the teachings of Kriya from Lahiri. He organized many study groups and gave regular discourses on the Bhagavad Gita at his "Gita Assemblies." He freely gave Kriya initiation to those of every faith, including Hindus, Moslems, and Christians, at a time when caste bigotry was very strong. He encouraged his students to adhere to the tenets of their own faith, adding the Kriya techniques to what they already were practicing.

He continued his dual role of accountant and supporter to his family, and a teacher of Kriya Yoga, until 1886, when he was able to retire on a pension. More and more visitors came to see him at this time. He seldom left his sitting room, available to all who sought his "". He often exhibited the breathless state of superconscious "".

Over the years he gave initiation to gardeners, postmen, kings, maharajas, sannyasis, householders, people considered to be lower caste, Christians, and Muslims.

Some of his notable disciples included , Swami , Swami Pranabananda, Swami Keshabananda, Sri Bhupendranath Sanyal, and the parents of Paramahansa Yogananda. Others who received initiation into Kriya Yoga from Lahiri included Swami Vhaskarananda Saraswati of Benares, Balananda Brahmachari of Deogarh, Maharaja Iswari Narayan Sinha Bahadur of Benares and his son.

to spread the teachings of Kriya Yoga. The Arya Mission Institution published commentaries by Lahiri on the Bhagavad Gita, along with other spiritual books, including a Bengali translation of the Gita. Lahiri himself had printed thousands of small books with excerpted passages from the Gita, in Bengali and Hindi, and distributed them for free, an unusual idea at that time.

In 1895 he began gathering his disciples, letting some of them know that he would soon be leaving the body. Moments before his passing, he said simply, "I am going home. Be comforted; I shall rise again." He then turned his body around three times, faced north, and consciously left his body, entering "". Lahiri Mahasaya died on September 26, 1895.

The central spiritual practice which he taught to his disciples was , a series of inner practices that quickly hasten the spiritual growth of the practitioner. He taught this technique to all sincere seekers, regardless of their religious background. In response to many types of problems that disciples would bring him, his advice would be the same &mdash; to practice more Kriya Yoga.

Always remember that you belong to no one, and no one belongs to you. Reflect that some day you will suddenly have to leave everything in this world–so make the acquaintanceship of God now. Prepare yourself for the coming astral journey of death by daily riding in the balloon of God-perception. Through delusion you are perceiving yourself as a bundle of flesh and bones, which at best is a nest of troubles. Meditate unceasingly, that you may quickly behold yourself as the Infinite Essence, free from every form of misery. Cease being a prisoner of the body; using the secret key of Kriya, learn to escape into Spirit.

He taught that Kriya practice would give the yogi direct experience of truth, unlike mere theoretical discussion of the scriptures, and to:

Solve all your problems through meditation. Exchange unprofitable religious speculations for actual God-contact. Clear your mind of dogmatic theological debris; let in the fresh, healing waters of direct perception. Attune yourself to the active inner Guidance; the Divine Voice has the answer to every dilemma of life. Though man’s ingenuity for getting himself into trouble appears to be endless, the Infinite Succor is no less resourceful.

Lahiri often spoke of the Guru-Disciple relationship in the context of Kriya Yoga. He always gave the Kriya technique as an initiation,

Regarding the necessity of the help of a Guru to deep yoga practice, he said:

It is absolutely necessary for all devotees to totally surrender to their Guru. The more one can surrender to the Guru, the more he can ascertain the subtlest of the subtle techniques of yoga from his Guru. Without surrender, nothing can be derived from the Guru.

The relationship Lahiri Mahasaya had with his own disciples was very individual. He even taught the Kriya Yoga practice slightly differently to each, depending on the spiritual needs of the individual disciple.

Lahiri taught that if one is earning an honest living and practicing honesty, then there was no need to alter one's external life in any significant way in order to become aware of God's presence. If a student neglected his worldy duties, he would correct him.

He generally eschewed organized religion. However, this wasn't a strict dogma for him, as he allowed at least one of his advanced disciples, Panchanon Bhattacharya, to open the “Arya Mission Institution” in to spread the Kriya teachings.

* on :
**, includes many stories and teachings of Lahiri Mahasaya
**, describes the theory behind the Kriya Yoga technique
**, recounts Lahiri's meeting with Mahavatar Babaji
*
*
*
*
*
*
*