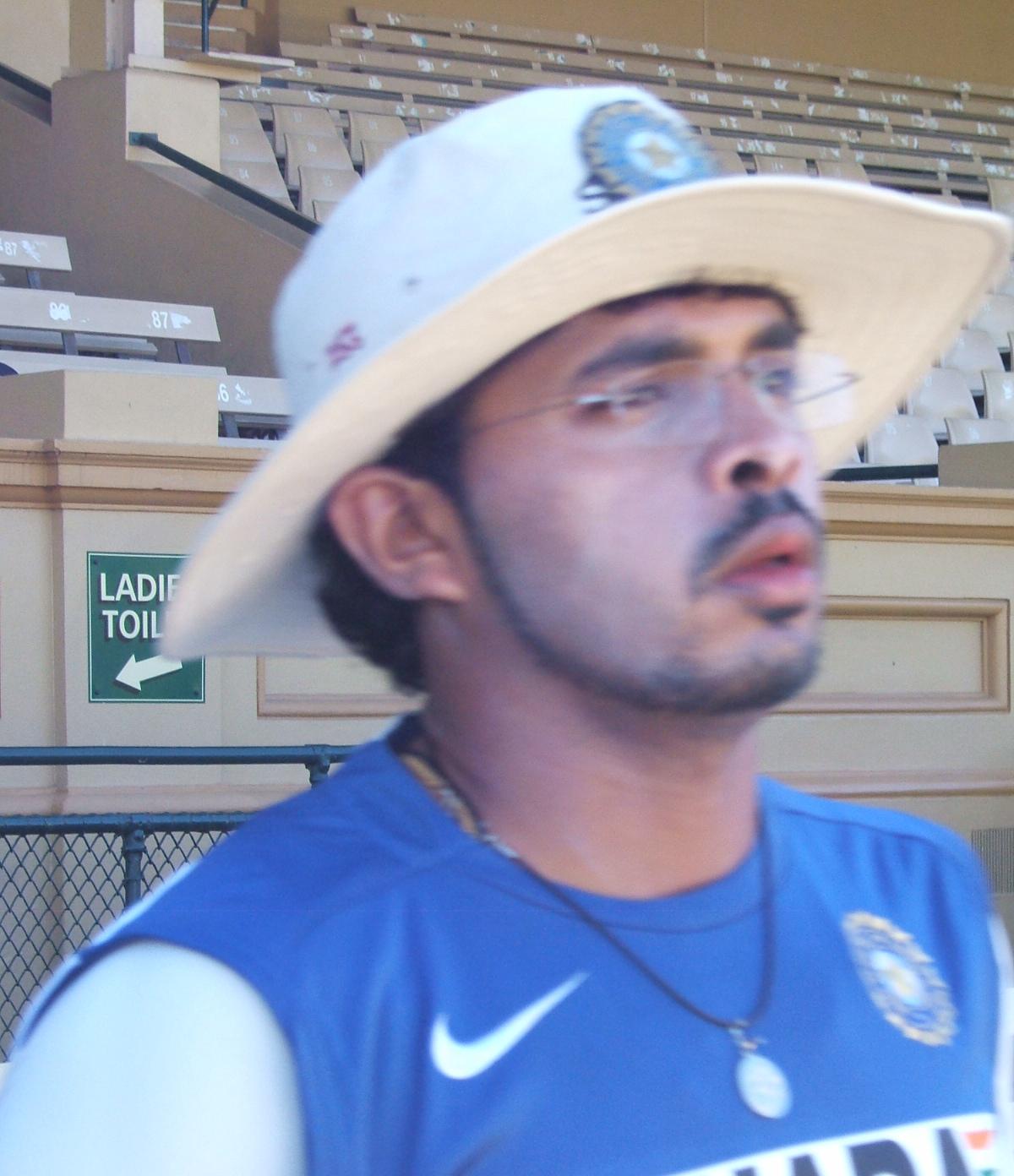 Shanthakumaran Sreesanth audio|Shantakumaran_Sreesanth.ogg|pronunciation (born 6 February 1983 in , , India), also known as S. Sreesanth and most commonly Sreesanth, is an Indian er. He is a right-arm fast-medium-pace bowler and a right-handed tail-ender batsman. A player of passion, he is noted for his exuberant and emotional behaviour, especially whilst appealing for and celebrating wickets. Such trademark behaviour has seen him frequently fined for violating the player conduct guidelines of the . He is known to bowl at speeds mostly around 142km/h/88mph.

Sreesanth initially was a leg-spinner in his childhood, modelling his action on India's leading Test wicket-taker and now Test captain . However, his habit of bowling yorkers led him to convert to fast bowling, after being encouraged by his elder brother.

He was selected for India-A side in a tour match against the visiting New Zealand side at . He claimed one wicket in twelve overs after being restricted with a injury. He also missed five Ranji Trophy games in that season, although he still travelled with the side for away games. This led to rumours that an astrologer convinced him to take a break from competition to preserve his longevity in the sport, which Sreesanth categorically denied, maintaining that he was training only to regain his fitness.

In November 2004, Sreesanth entered the record books when he took a hat-trick against Himachal Pradesh in a Ranji trophy game, the first time it was achieved by a Kerala bowler, earning him the nickname "The Prince of hat-tricks" amongst Keralites. He was selected to represent India B in the Challenger Trophy in October 2005, a domestic limited-overs tournament. [ [http://www.cricinfo.com/db/ARCHIVE/2005-06/IND_LOCAL/CHLNGR/CHLNGR_2005-06_IND-B-SQUAD.html Challenger Trophy, 2005-06: India B squad] ] His strong performance in that tournament, being the leading wicket taker (7) with the third best bowling average [ [http://www.cricinfo.com/db/ARCHIVE/2005-06/IND_LOCAL/CHLNGR/STATS/IND_LOCAL_CHLNGR_AVS_BOWL_BEST_AVS.html Challenger Trophy, 2005-06: Bowling Averages] ] led to selection for the Indian team for the home ODI series against Sri Lanka. [ [http://content-usa.cricinfo.com/india/content/story/221967.html Sreesanth in, Laxman out] ]

His disappointing economy rate led him to be left out of the squad of 14, with the beneficiary being . He made an unexpected come back to the blue squad due to the injury to later in the tournament. He was also out of the Indian ODI team for the England tour.

Sreesanth was selected for his first Test squad in the home series against England in March 2006, in place of . He claimed 4/95 in his debut appearance in the 1st Test in , where he opened the bowling with . [ [http://www.cricinfo.com/db/ARCHIVE/2005-06/ENG_IN_IND/SCORECARDS/ENG_IND_T1_01-05MAR2006.html Sreesanth Test Debut] ] He was ruled out of the second Test in due to illness, but recovered and captured five wickets as well a 29* with the bat in the Third Test in . With the axing of Pathan, Sreesanth became India's leading pace bowler on the tour of the West Indies. He missed the second Test due to an injury but managed to claim his best match figures of 5/72 in the 4th Test in . [ [http://statserver.cricket.org/guru?sdb=player;playerid=12020;class=testplayer;filter=basic;team=0;opposition=0;notopposition=0;season=0;homeaway=0;continent=0;country=0;notcountry=0;groundid=0;startdefault=2005-10-25;start=2005-10-25;enddefault=2006-05-28;end=2006-05-28;tourneyid=0;finals=0;daynight=0;toss=0;scheduledovers=0;scheduleddays=0;innings=0;result=0;followon=0;seriesresult=0;captain=0;keeper=0;dnp=0;recent=;viewtype=aro_list;runslow=;runshigh=;batposition=0;dismissal=0;bowposition=0;ballslow=;ballshigh=;bpof=0;overslow=;overshigh=;conclow=;conchigh=;wicketslow=;wicketshigh=;dismissalslow=;dismissalshigh=;caughtlow=;caughthigh=;caughttype=0;stumpedlow=;stumpedhigh=;csearch=;submit=1;.cgifields=viewtype Tests - Innings by innings list] ]

Sreesanth's most significant performance to date in Test cricket was his role in the 1st Test of India's 2006 tour to South Africa at . After losing the limited-overs series 4-0, Sreesanth produced took 5-40 in a display of pace and swing to help dismiss South Africa. This performance helped to bowl South Africans out for just 84, leading to first Indian win on South African soil, for which he was named man of the match. Again, Sreesanth's emotional antics, which have led him to be regarded by some commentators as eccentric, were frequently noted. He was fined after breaching the 's advertising logo policy, and also for "conduct contrary to the spirit of the game" after sending off after dismissing him. [cite web|title= 2006: Penalties imposed on players for breaches of ICC Code of Conduct| url= http://www.icc-cricket.com/icc/rules/penalties/2006.html|publisher = | accessdate = 2007-01-30] He was also involved in a confrontation while batting against paceman , responding to a taunt from the fast bowler by charging the next ball, hitting it for six, and then running after Nel to perform a dance. [cite web|title= Cricket: Sreesanth Swinging His Bat..... Dhoom Machale?!| url= http://video.google.co.uk/videoplay?docid=-3454538612898135067]

Sreesanth courted controversy once again during the fourth day of the second test of India's 2007 tour to England at Trent Bridge. He was fined half of his match fee for deliberately shoulder barging England captain Michael Vaughan whilst walking back to his mark. He also bowled a beamer at batsman Kevin Pietersen, which the latter had to take drastic action to avoid. Sreesanth however did immediately apologise afterwards. After the match he said that the ball had slipped from his hand. Soon later he bowled a no-ball where he overstepped the crease by convert|2|ft|m, leading to speculation it was deliberate, the delivery was a bouncer to Paul Collingwood. Former England captain Michael Atherton called for Sreesanth to be banned for the Pietersen beamer, saying that Sreesanth couldn't control his on-pitch emotions. [http://content-aus.cricinfo.com/engvind/content/story/304509.html] [http://content-aus.cricinfo.com/engvind/content/story/305193.html]

In September 2007, Sreesanth joined the Indian team in South Africa for the inaugural Twenty20 World Cup following his omission for the one-day series in England. Although his performance in the tournament lacked consistency, Sreesanth managed breakthroughs at critical junctures that were vital to his team's success. During the semifinal match against Australia which India won, Sreesanth got the vital wickets of the Australian openers Gilchrist and Hayden. The latter proved to be decisive in turning the match round in India's favour. In the final against Pakistan, Sreesanth proved expensive with the ball, but became the centre of Indian celebrations as he held on to the catch in the last over that ended Pakistan's innings and made India World Twenty20 champions.

On 25 April 2008, following the victory of his 's victory in the over the at , Sreesanth was allegedly slapped under his eye by , the captain of Mumbai. The incident came to light as Sreesanth was caught by TV cameras sobbing inconsolably on the field before the presentation ceremony. Sreesanth had since downplayed the incident saying he had no complaints against Harbhajan who was "like an elder brother" to him. Harbhajan's team had lost their third consecutive match when he apparently reacted violently to Sreesanth's approaching him and saying "hard luck". The IPL banned Harbhajan from the remainder of the tournament and prohibited him from collecting his salary. The launched a separate investigation into the incident and decided to ban Harbhajan for five ODIs, deeming him to have broken the code of conduct in his national contract. [cite news| title = Kings XI Punjab v Mumbai Indians| url=http://content-usa.cricinfo.com/ipl/engine/current/match/335991.html| publisher = | date = | accessdate = 2008-04-25] [cite news| title = Bhajji slaps, Sree sobs | url=http://www.telegraphindia.com/1080426/jsp/frontpage/story_9191426.jsp| publisher = | date = | accessdate = 2008-04-25] [cite news| title = Bhajji 'slaps' Sreesanth, makes him cry | url = http://timesofindia.indiatimes.com/Bhajji_slaps_Sreesanth_makes_him_cry/articleshow/2983882.cms| publisher = | date = | accessdate = 2008-04-25] [cite news| title = Match results - Indian Premier League, 2007/08 | url = http://content-usa.cricinfo.com/ipl/engine/series/313494.html| publisher = | date = | accessdate = 2008-04-25]

Sreesanth studies at university when not playing cricket, and speaks English, Tamil, and Hindi in addition to his mother tongue Malayalam. In his early years, he was a breakdancer, becoming a national champion when he was in the eighth grade.

In the English-language media, Sreesanth's full name has been the source of some confusion. He has been variously referred to as "Sree Sreesanth", [ [http://www.telegraph.co.uk/sport/main.jhtml?xml=/sport/2007/07/15/scindi115.xml Middle-order quartet aim to help India again] ] "Sri Sreesanth", [ [http://www.dailymail.co.uk/pages/live/articles/columnists/columnists.html?in_page_id=1951&in_article_id=469372&in_author_id=442 Aussie rules as Lord’s finally sees the light] ] "Shantha Sreesanth". [ [http://www.telegraph.co.uk/sport/main.jhtml?xml=/sport/2007/07/31/scbrig131.xml India have stood up to England's bullying] ] and "Shanthakumaran Sreesanth". [ [http://www.telegraph.co.uk/sport/main.jhtml?xml=/sport/2007/06/12/ucrup12.xml India name squad for England tour] ] He has also stated in the past that he wished to be known as "Sree Santh". [ [http://cricket.indiatimes.com/Sree_Santh_widens_the_gap/articleshow/2218600.cms Sree Santh widens the gap] ] In September 2007, Sreesanth said that his name was just "Sreesanth" and that the other variations were incorrect:

"It’s Sreesanth. There is no Shanthakumaran Sreesanth, there is no S. Sreesanth. There was this function recently where they called me Sree Sreesanth, then Sree, and finally S Sreesanth. It’s just Sreesanth." [ [http://www.indianexpress.com/ideaexchange/fullstory.php?content_id=215329 ‘Problem was I took South Africa to England . . . Twenty20 is won in one or two overs . . . Don’t care if it’s Nel or Lara, why should we be scared?’] ]