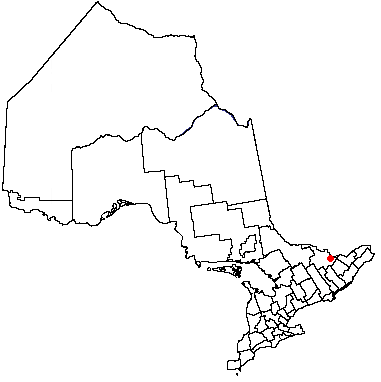 Renfrew, , is a on the in Renfrew County, located in .

Named after the town of Renfrew in . Renfrew was settled largely in part to logging in the area in the early 1800s, and used the river in order to drive the lumber to locations such as Ottawa. This heritage was once celebrated every July with the Lumber Baron Festival until recent years.

Much of Renfrew's current prosperity comes from being the commercial centre for over 30,000 residents of the surrounding small towns and rural region, with over 450 small service or commercial businesses in the 2001 municipal census

Despite the apparent prosperity, Statistics Canada reported the average earnings of Renfrew residents in 2000 as $35,811, or roughly 31% lower than the provincial average and 5% lower than the county average

* The Renfrew Mercury
* The Renfrew Weekender
* My FM ( [http://www.myfmradio.ca/ external link] )
* TVCogeco
* Valley Heritage Radio ( [http://www.valleyheritageradio.ca/ external link] )The was a balconied and elegantly decorated town landmark that was converted from a live theatre to a movie theatre, then upgraded in the 1990s to accommodate two screens, but maintains much of the original appeal.

* Renfrew is the annual host and sponsor of the , a celebration of the towns roots in the logging industry. The Lumber Barron Festival would later become known as , dropping its historical roots.
* The Renfrew Fair has been drawing mixed crowds for decades with its rides, competitions, demolition derby, musical acts and livestock showcase. The fair takes place one the second weekend of every September and lasts from Wednesday afternoon until Sunday afternoon.
*In recent years local farm-owner Andy Taylor has hosted , a twelve-hour festival featuring varying musical acts.
*In 2008 Renfrew will be 150 years old.They will celebrate with a year-long celebration.Begins on January 1,2008.Ends on December 31,2008.
*In 2009 Renfrew will host the 18th annual Ontario Swingers Festival.

*
*
*Professional ice hockey player, member of NHL, Hall of Fame inductee "Terrible" Ted Lindsay
*Professional NHL ice hockey players , and
* famous Welsh "tramp-poet" lost his foot trying to jump a freight train at Renfrew on the evening of March 20 . He was subsequently cared for at the local hospital, to which he was forever indebted.

John Lorn McDougall, politician and fur trader, built the mill in 1855 by the near the town landmark Swinging Bridge and overlooking natural rapids below the generating station. It has been converted into a museum, sometimes referred to as 'Renfrew Museum', not to be confused with museums of that name in Pennsylvania and Scotland. The [http://www.renfrewmuseum.ca/content.htm McDougall Mill Museum] houses pioneer tools and machinery, a military section, a doll exhibit, as well as toys, Victorian clothing and household items. [ [http://www.ottawavalleyguide.ca/mcdougallmill.html Ottawa Valley Guide: McDougall Mill.] Retrieved 21 August 2007.]