Winter in the Belly of a Snake

Winter in the Belly of a Snake 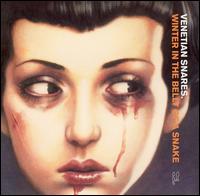 The album is generally categorised as glitchcore or due to the complicated drum patterns, often consisting of only short "clicks and cuts" and resonant squeaks, squelches, and buzzes but mostly also with a distorted bass drum. Some short tracks have no such drum patterns and are better described as or subtler kinds of noise. A few pieces contain vocals, some of which—such as the opener "Dad"—feature vocals from Funk himself, also most prominently in "She", which was written by Misfits and Danzig singer , and the track "Fraujäger" (German, meaning "Woman Hunter") which contains heavily distorted vocals by Aiwaz. Also, the track "January" samples popular American storyteller saying "It's January" and "I realized that if my body broke, I would break into blossom".

The cover art is by the British artist .

"Winter in the Belly of a Snake" was described as "a masterpiece of brutally calculated drill & bass programming combined with ill, Clive-Barker-esque atmospherics and quirky, twisted melodies." [In Case of Aural Ingestion, "Montreal Mirror" [http://www.montrealmirror.com/ARCHIVES/2002/120502/music5.html Available online] ]