The Corn Snake (Pantherophis guttatus), or Red Rat Snake, is a North American species of Rat Snake that subdues its small prey by constriction. The name "Corn Snake" is a holdover from the days when southern farmers stored harvested ears of corn in a wood frame or log building called a crib. Rats and mice came to the corn crib to feed on the corn, and Corn Snakes came to feed on the rodents.[1] The Oxford English Dictionary cites this usage as far back as 1676. Corn Snakes are found throughout the southeastern and central United States. Their docile nature, reluctance to bite, moderate adult size 3.9–5.9 feet (1.2–1.8 m), attractive pattern, and comparatively simple care make them popular pet snakes. In the wild, they usually live around 6–8 years, but in captivity can live to be up to 23 years old.[2]

There are two subspecies of Pantherophis guttatus:

Wild Corn Snakes prefer habitats such as overgrown fields, forest openings, trees, palmetto flatwoods and abandoned or seldom-used buildings and farms, from sea level to as high as 6,000 feet. Typically, these snakes remain on the ground, but can ascend trees, cliffs and other elevated surfaces.[7] They can be found in the southeastern United States ranging from New Jersey to the Florida keys and as far west as Texas.

In colder regions, snakes hibernate during winter. However, in the more temperate

Corn snakes are relatively easy to breed. First they have to go through a cooling (also know as brumation) period that takes usually 60-90 days long. This is to get them ready for breeding and to tell them that its time to reproduce. Corns brumate at around 50-60 degrees F in a place where they can not get disturbed and not worry about predators. When its summer they go out to warm up to their regular temperature. 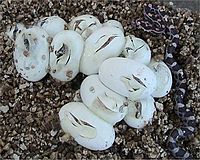 Corn Snakes usually breed shortly after the winter cooling. The male courts the female primarily with tactile and chemical cues, then everts one of his hemipenes, inserts it into the female, and ejaculates his sperm. If the female is ovulating, the eggs will be fertilized, and she will begin sequestering nutrients into the eggs, then secreting a shell.

Egg-laying occurs slightly more than a month after mating, with 12–24 eggs deposited into a warm, moist, hidden location. Once laid the adult snake abandons the eggs and does not return to them. The eggs are oblong with a leathery, flexible shell. Approximately 10 weeks after laying, the young snakes use a specialized scale called an egg tooth to slice slits in the egg shell, from which they emerge at about 5 inches in length.

After many generations of selective breeding, domesticated Corn Snakes are found in a wide variety of different colors and patterns. These result from recombining the dominant and recessive genes that code for proteins involved in chromatophore development, maintenance, or function. New variations, or morphs, become available every year as breeders gain a better understanding of the genetics involved.

There are tens of thousands of possible compound morphs. Some of the most popular are listed.