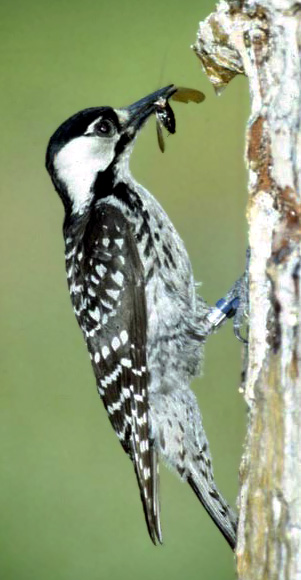 Red-cockaded Woodpeckers are a territorial, nonmigratory, species, frequently having the same mate for several years.The nesting season lasts from April to June. The breeding female lays three to four eggs in the breeding male's roost cavity. Group members incubate the small white eggs for 10-12 days. Once hatched, the nestlings remain in the nest cavity for about 26 days. Upon fledging, the young often remain with the parents, forming groups of up to nine or more members, but more typically three to four members. There is only one pair of breeding birds within each group, and they normally only raise a single brood each year. The other group members, called helpers, usually males from the previous breeding season, help incubate the eggs and raise the young. Juvenile females generally leave the group before the next breeding season, in search of solitary male groups.

Historically, this woodpecker's range extended in the southeastern from to and , as far west as eastern and , and inland to , , and . Today it is estimated that there are about 5,000 groups of red-cockaded woodpeckers, or 12,500 birds, from Florida to and west to southeast Oklahoma and eastern Texas, representing about 1% of the woodpecker's original population. They have become extinct-(extirpated), in New Jersey, Maryland, and Missouri.

The aggregate of cavity trees is called a cluster and may include 1 to 20 or more cavity trees on 3 to 60 s (12,000 to 240,000 m²). The average cluster is about 10 acres (40,000 m²). Cavity trees that are being actively used have numerous, small wells which exude . The birds keep the sap flowing apparently as a cavity defense mechanism against s and possibly other predators. The typical territory for a group ranges from about 125 to 200 acres (500,000 to 800,000 m²), but observers have reported territories running from a low of around 60 acres (240,000 m²), to an upper extreme of more than 600 acres (2.40 km²). The size of a particular territory is related to both habitat suitability and population density.

In an effort to increase the Red-cockaded Woodpecker population, states such as Texas, Louisiana, and Georgia's wildlife management is creating artificial cavities in Longleaf Pine trees. There are two methods in which wildlife management officers use to insert cavities in long leaf pines. The most respected and latest approach is to carve out a nesting cavity in the tree and insert a man-made nest. The older and less used approach is to drill a cavity into the tree in hopes that the birds will settle there and nest. [cite web| url=http://www.gpb.org/media/pdf/RedHillsofGa1506.pdf| title=The Red Hills of Georgia (transcript, p. 6)| author=Georgia Public Broadcasting: "Georgia Outdoors"| accessdate = 2007-05-14| ]