Charles Williams (August 13, 1909 – ca. April 7, 1975) was an American writer of hardboiled crime fiction. He is regarded by critics as one of the finest suspense novelists of the 1950s and 1960s. His 1951 debut, the pulp paperback novel Hill Girl, sold over a million copies. A dozen of his books have been adapted for the screen, most popularly Dead Calm.

Williams was born in the central Texas town of San Angelo. After attending school through tenth grade, in 1929 he enlisted in the US Merchant Marine. He served for ten years before leaving to marry Lasca Foster. Having trained as a radioman during his seafaring career, Williams worked as an electronics inspector, first for RCA in Galveston, Texas, later at Puget Sound Navy Yard in Washington State through the end of World War II. He and his wife then moved to San Francisco, where he worked at Mackay Radio until the publication of his first novel, Hill Girl, in 1951. It was a great success, and Williams spent the rest of his professional career as a writer, primarily of novels, with several screenplays also to his credit. The couple changed residences frequently and apparently spent considerable time in France, where Williams's work has an excellent reputation. After the death of his wife from cancer in 1972, Williams purchased property on the California-Oregon border where he lived alone for a time in a trailer. Ultimately relocating to Los Angeles, Williams committed suicide in his apartment in the Van Nuys neighborhood in early April 1975. He was survived by a daughter, Alison.[1] Many sources continue to repeat the false rumor that Williams died by drowning in the Gulf of Mexico or in France.

Hell Hath No Fury (1953), one of Williams's best known novels

Williams's work is identified with the noir fiction subgenre of hardboiled crime writing. His 1953 novel Hell Hath No Fury—published by the defining pulp crime fiction house, Gold Medal Books—was the first paperback original to merit a review from renowned critic Anthony Boucher of The New York Times. Boucher relates Williams to two of the most famous noir fiction writers: "The striking suspense technique...may remind you of [Cornell] Woolrich; the basic story, with its bitter blend of sex and criminality, may recall James M. Cain. But Mr. Williams is individually himself in his sharp but unmannered prose style and in his refusal to indulge in sentimental compromises."[2] Ed Gorman's description of a characteristic Williams novel, Man on the Run (1958), outlines the essential elements that associate it with the noir fiction category: "a) a falsely accused man trying to elude police, b) a lonely woman as desperate in her way as the man on the run, c) enough atmospherics (night, rain, fog) to enshroud a hundred films noir."[3] Cultural critic Geoffrey O'Brien further details Williams's "chief characteristics":

a powerfully evoked natural setting, revelation of character through sexual attitudes and behavior, and a conversational narrative voice that makes the flimsiest tale seem worth telling.... His narrator is generally an ordinary, curiously amoral fellow fueled by greed and lust but curiously detached from his own crimes. [A number of his books] are variations on the same serviceable plot: boy meets money, boy gets money, boy loses money. Each of them hinges on a woman, and it is in the intricacies of the man-woman relationship that Williams finds his real subject.... [O]ften the woman is both more intelligent and—even when she is a criminal—more aware of moral complexities than the affectless hero.[4]

Williams's novel River Girl (1951) is described by pulp fiction expert George Tuttle as a "classic example of backwoods noir...us[ing] an Erskine Caldwell type setting to heighten the sexual overtones of the story."[6] Many of Williams's other novels are also of this "backwoods noir" type: Hill Girl; Big City Girl; Go Home, Stranger; The Diamond Bikini; Girl Out Back; and Uncle Sagamore and His Girls. Williams also turned often, particularly late in his career, to what might be called "blue-water noir": Scorpion Reef, The Sailcloth Shroud, Aground, Dead Calm, and And The Deep Blue Sea. Woody Haut argues that Williams, like fellow pulp novelist Charles Willeford, wrote stories fueled by an "antipathy to state power, state crimes and the creation of social conditions leading to criminal activity. Relying on wit, humor and ingenious plotting, Williams's characters constantly attempt to outwit the system."[7] 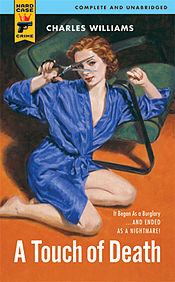 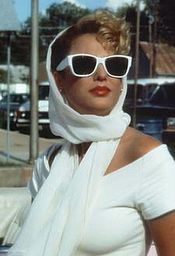 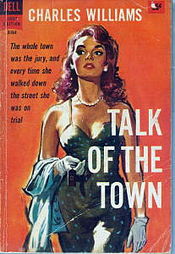 Of Williams's twenty-two novels, sixteen were paperback originals—eleven of them Gold Medals; he is described by Gorman as "the best of all the Gold Medal writers."[8] Pulp historian Woody Haut calls Williams the "foremost practitioner"[9] of the style of suspense that typified American pulp literature from the mid-1950s through the early 1960s: "So prolific and accomplished a writer was Charles Williams that he single-handedly made many subsequent pulp culture novels seem like little more than parodies."[10] Fellow hardboiled author John D. MacDonald cites him as one of the most undeservedly neglected writers of his generation.[11] O'Brien, singling him out as especially "overdue" for "wider appreciation," describes Williams as a stylist consistently faithful to "the narrative values which make his books so entertaining and his present neglect so inexplicable."[12]

As of mid-2006, only three of Williams's novels are in print in the United States: River Girl, Nothing in Her Way (1953), and A Touch of Death (1954). Most of his work is currently in print in France, issued primarily by Rivages and Gallimard's Série noire. At present, two of the five officially released English-language movies based on his writing are available on DVD in North America: Dead Calm (1989), directed by Phillip Noyce and starring Nicole Kidman, Sam Neill, and Billy Zane, and The Hot Spot (1990), directed by Dennis Hopper and starring Don Johnson, Virginia Madsen, and Jennifer Connelly. In addition, the French production Vivement dimanche! (Confidentially Yours) (1983), directed by François Truffaut and starring Fanny Ardant and Jean-Louis Trintignant, is currently available on US video.

While Williams is little known by the general American audience today, between 1960 and 1990 twelve of his novels were adapted for cinema or television in the United States, France, and Australia:

(novels in publication order, with alternate titles in the US and the UK; original year of publication; publisher name; and, for Gold Medal and Dell books, initial publication number)

Note: The novel Fires of Youth (1960; Magnet 309) is credited to "Charles Williams." There is currently no definitive evidence available that it was written by the Charles Williams discussed in this article. The novel—variously described as "sleaze," "pulp erotica," and "a coming of age story"—is said to read like Williams in terms of literary craft, but the teenaged themes are atypical for him and it was put out by one of the smaller pulp publishing houses during his period of success. Neither the covers nor the other publisher's content of the book make reference to the work already published by the Charles Williams here in question.[13]

On the success of Hill Girl