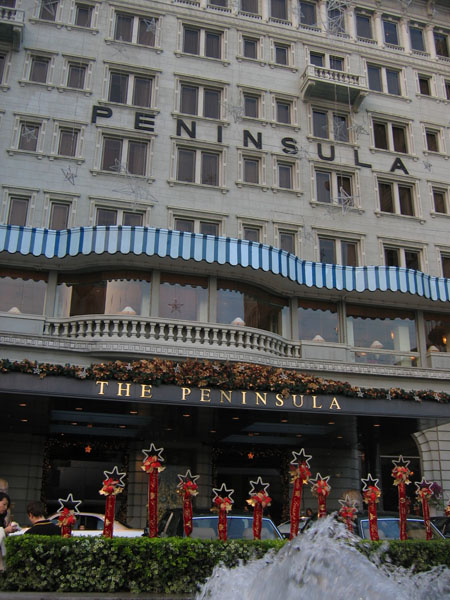 The Peninsula Hong Kong ( _zh. 香港半島酒店) opened in 1928 is Hong Kong's first hotel and is also one of the most internationally recognizable s in . [ [http://hongkong.peninsula.com/phk/information_01.html History] ] It is located at the junction of and Salisbury Road in , . Founded by members of the , the hotel today is part of the Hongkong and Shanghai Hotels group headed by Sir . The Peninsula Hotel Group's flagship property has been voted as the world's best hotel on a couple of occasions and is widely regarded as one of the legendary properties.

It opened in , , in December of , built with the idea that it would be "the finest hotel east of ." Passengers arriving in Hong Kong by ocean liner disembarked onto the quays of Kowloon plus, it was the last stop on the trans-Siberian rail link that brought travelers from Europe. As such, the Peninsula hotel was ideally situated to take advantage of the increasing number of wealthy visitors to the area.

From the moment the hotel opened its doors to the first guest, the Peninsula name has been synonymous with welcoming the rich, the famous, the titled and the titans of industry to a place of unsurpassed luxury and service. The hotel is also distinguished by its fleet of signature Rolls-Royces, which can be hired by guests. These cars are painted in a distinctive shade of green known as "Peninsula green".

On , , at the end of the , British colonial officials headed by the , Sir , surrendered in person at the ese headquarters on the third floor of The Peninsula. The Hotel was then renamed "The Toa Hotel".

In 1994, an extension was added to the original hotel. The features of the existing hotel building was preserved; these include the forecourt, the lobby and the front facade. The hotel was in operation when the extension was in process. [Hong Kong Institute of Acrhitects Annual Awards(1997).Hong Kong Architecture 3. Hong Kong: Hinge Marketing. ]

In , a 30-story tower was added in the same original style and the hotel installed a for clients. It is one of only two private rooftop helipads in the territory, the other being located on top of the . The helipads are being used for the transfer of the hotel's VIP clients with the flight duration to the Hong Kong International Airport being 7 minutes.

The total number of rooms in the hotel was increased to 300 as 132 rooms and suites were created. There are 10 floors of office space, shops and a series of hotel facilities added to the existing hotel buildings [Hong Kong Institute of Acrhitects Annual Awards(1997).Hong Kong Acrhitecture 3. Hong Kong: Hinge Marketing."'] .

The Peninsula Hotel has a collection of highly acclaimed restaurants. They include the gourmet French restaurant , which has one of the first Chef's Tables in Hong Kong, and the -designed Felix. Other notable restaurants include Spring Moon and Chesa, which specialize in Cantonese and Swiss cuisine respectively.

Since December 2006, the hotel has had a fleet of 14 Long Wheelbase s painted in the hotel's signature green. This was the largest order placed for Rolls Royce in the history of the company. [ [http://hongkong.peninsula.com/phk/information_08.html Rolls-Royce fleet information] ] It replaces a fleet of Rolls-Royce Silver Spurs.

The Peninsula Hotel Hong Kong has been recognised as an internationally leading hotel in many areas. [ [http://hongkong.peninsula.com/phk/information_03.html Awards and Accolades] ] It has received awards from magazine, Travel + Leisure, and other industry organizations.