The New-York Historical Society is an American history museum and library located in New York City at the corner of 77th Street and Central Park West in Manhattan. Founded in 1804 as New York's first museum, the New-York Historical Society presents exhibitions, public programs and research that explore the rich history of New York and the nation. Its landmark building is currently under renovation, with its reopening scheduled for November 2011. Since 2004, the president of the Historical Society has been Louise Mirrer, who was previously Executive Vice Chancellor for Academic Affairs of the City University of New York.[1] 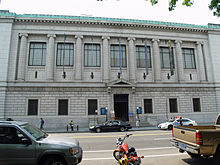 The New-York Historical Society holds an extensive collection of historical artifacts, works of American art, and other materials documenting the history of the United States and New York. It presents deeply researched exhibitions on a variety of topics and periods in American history, such as George Washington, Alexander Hamilton, Slavery in New York, The Hudson River School, Abraham Lincoln, Ulysses S. Grant, Tiffany designer Clara Driscol, and the history of the Constitution. The Historical Society also offers an extensive range of curriculum-based school programs and teacher resources, provides academic fellowships and organizes public programs for adults to foster lifelong learning and a deep appreciation of history.[2] 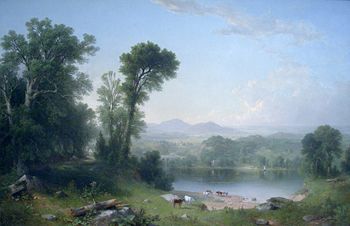 The New-York Historical Society’s museum is the oldest in New York City and predates the founding of the Metropolitan Museum of Art by nearly 70 years. Its art holdings comprise more than 1.6 million works. Among them are a world-class collection of Hudson River School paintings, including major works by Thomas Cole and Frederic Edwin Church; iconic genre and history paintings including works by William Sidney Mount and Eastman Johnson; a vast range of American portraits, including paintings by Rembrandt Peale and Gilbert Stuart; all 435 of John James Audubon’s extant preparatory watercolors for Birds of America[3] ; and an encyclopedic collection of more than 800 works documenting the full range of representational sculpture in America from the colonial period to the present day[4] . The Historical Society also holds an important collection of paintings and drawings by marine artist James Bard.[5] The museum holds much of sculptor Elie Nadelman’s legendary American folk art collection, including furniture and household accessories such as lamps, candlesticks, textiles, glass, and ceramic objects, as well as paintings, toys, weathervanes, sculptural woodcarvings, and chalkware[6] . The Historical Society’s holdings in artifacts and decorative arts include George Washington’s camp bed from Valley Forge, the desk at which Clement Clarke Moore wrote “A Visit from Saint Nicholas,” one of the world’s largest collections of Tiffany lamps and glasswork, and a collection of more than 550 late ninteenth-century American board games[7] .

Its research library contains more than three million books, pamphlets, maps, atlases, newspapers, broadsides, music sheets, manuscripts, prints, photographs, and architectural drawings. Among its collections are far-ranging materials relating to the founding and early history of the nation; one of the best collections of 18th century newspapers in the United States; an outstanding collection of materials documenting slavery and Reconstruction; an exceptional collection of Civil War material, including Ulysses S. Grant’s terms of surrender for Robert E. Lee; collections relating to trials in the United States prior to 1860; American fiction, poetry, and belles-lettres prior to 1850; a broad range of materials relating to the history of the circus; and American travel accounts from the colonial era to the present day[8] [9] .

The Historical Society was founded on November 20, 1804, largely through the efforts of John Pintard, who for some years was secretary of the American Academy of Fine Arts, as well as the founder of New York's first savings bank. He was also among the first to agitate for a free school system. The first meeting comprised 11 of the city's most prominent citizens, including Mayor DeWitt Clinton. At the meeting, a committee was selected to draw up a constitution, and by December 10, the Historical Society was officially organized.

In 1813, nine years after its founding when the Historical Society's first catalogue was printed, they owned 4,265 books, as well as 234 volumes of United States documents, 119 almanacs, 130 titles of newspapers, 134 maps, and 30 miscellaneous views. It had already collected the start of a manuscript collection, several oil portraits and 38 engraved portraits.

The central portion of the present building on Central Park West was completed in 1908, to designs by architects York and Sawyer. In 1938 that central block was extended and sympathetically completed by the construction of pavilions on either end, with Walker & Gillette as architects. That extension project stands among the last examples of Beaux-Arts architecture completed in the city and in the entire country. 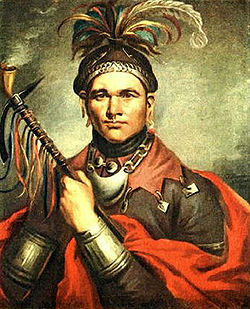 Two stained glass windows of exceptional note are found in the library on the 2nd floor. One represents The Arrival of Henry Hudson and was designed by Mr. Calvert of the Gorham Manufacturing. The second one, on the right-hand side of the information desk, is called the Huguenot memorial window, or more formally, the Revocation of the Edict of Nantes. It is one of Mary E. Tillinghast's most recognized achievements because it is a large and handsome window prominently displayed in an easily accessible spot and that it is inscribed in the lower left corner "Copyright July 1908. M.E. Tillinghast" and in the lower right signed in her script, "Mary Tillinghast Fecit 1908." The window was underwritten by Mrs. Russell Sage, who had also been instrumental in other windows done by Miss Tillinghast.

The Historical Society's collection continued to grow throughout the 20th century, but renewed financial woes in the 1970s and 1980s forced the Historical Society to limit access to its collections to professional researchers. In the 1980s they used endowment invasion to pay their annual operating costs and cover their salaries to the point where by 1988 they had only enough money in their endowment to pay for another 18 months of operating expenses.[11][12] Barbara Knowles Debs from Manhattanville College was named interim director of the Historical Society.[13] In the same year hundreds of paintings, decorative art objects, and other artifacts that were stored in a Manhattan warehouse were found to be covered in mold and damaged. Many of the objects were on long term loan to the museum.[14]

In 1995, grants from the city and state restored public access under the direction of Betsy Gotbaum. Since the late 1990s, the New-York Historical Society has invested significantly in facility and installation upgrades and has increased its operating budget by 160 percent to enhance and expand its public programs, while maintaining a balanced budge from 1998 to the present. Recent renovations to the Historical Society include new galleries and exhibition spaces, the Henry Luce III Center for the Study of American Culture, a state-of-the-art library reading room, and a new facility to house and provide access to the letters and manuscripts of the Gilder Lehrman Institute of American History. In 2005, the Historical Society was among 406 New York City arts and social service institutions to receive part of a $20 million grant from the Carnegie Corporation, which was made possible through a donation by New York City mayor Michael Bloomberg.

Under the direction of Louise Mirrer, a three-year, $65 million renovation of its landmark building on Central Park West is currently in progress and scheduled for completion in November 2011 to enhance public access to the institution's resources. After reopening, the Historical Society will offer a multimedia installation of major themes of American history through stories and figures from New York's past and an all-new, interactive children's history museum. [15]